Here's the original ad from the back of the comic books: 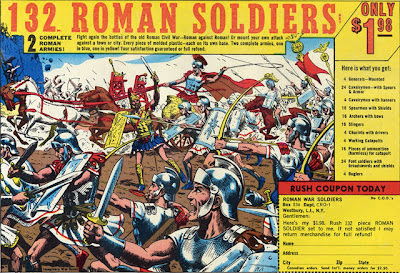 Certainly colourful enough! Full of action and promise for the young reader. 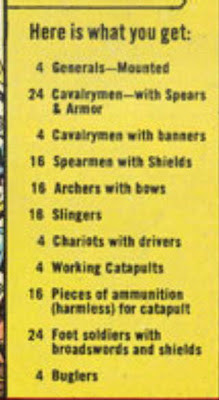 A close up of the contents that make up the two Roman armies. 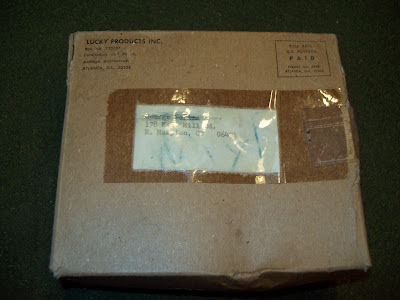 The box an army arrived in long ago. 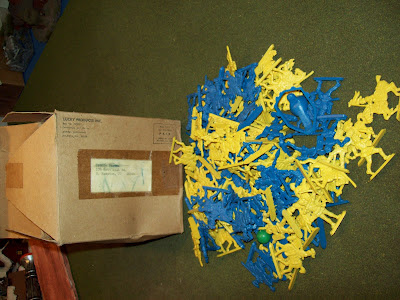 The contents spilled out. In this case, an incomplete army due to age and use. 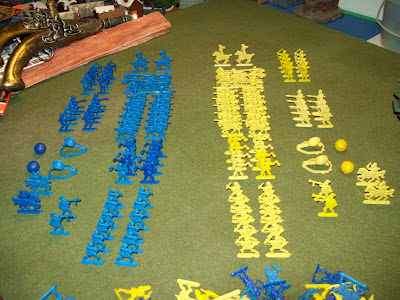 Here's what you would have received, arrayed for battle. Sharp eyes will note the different hues of plastic, additions to flesh out a complete set from other partial sets I own. As with the Lucky Toys 204 Revolutionary War set, the plastic soldiers do vary in shades of colour. 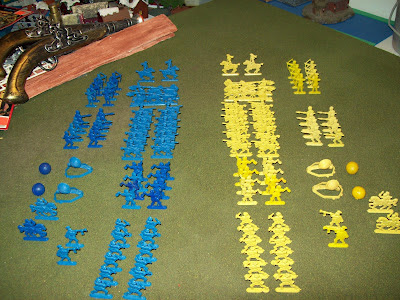 Another view of the full set. 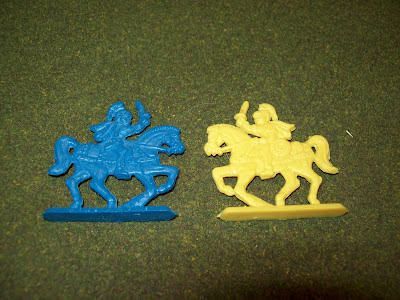 The Commanders. There were 4 in each set. 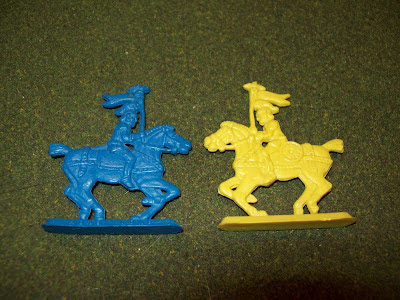 The Cavalry Banners. There were 4 of these. 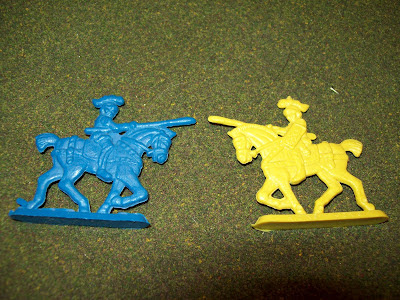 The cavalry. 24 of these were in each set. 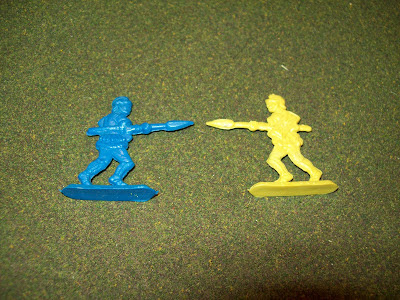 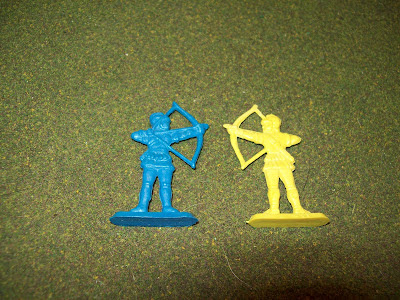 Archers. 16 per set. These figures are in full Roman armour and are wearing rather short tunics. 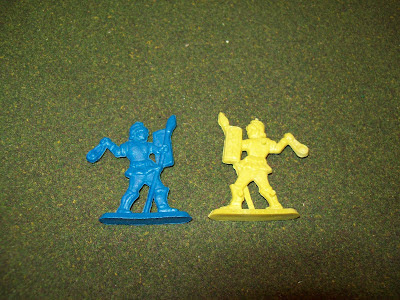 Slingers. 16 per set. These are a fanciful pose, full armour, a heavy spear and shield and a sling. 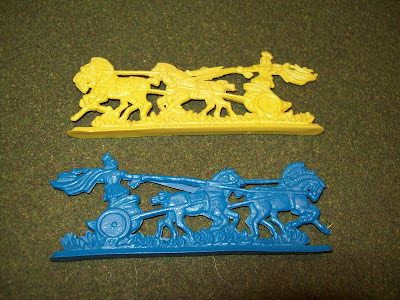 The Chariots, some of the nicest pieces in the set. There were 4 of these. 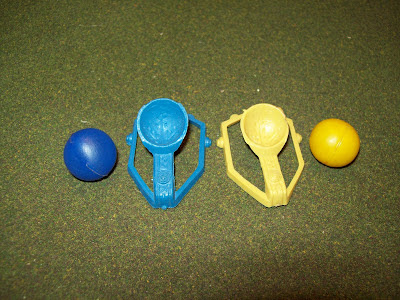 The catapults, 2 per side. The ammunition is a feather light hollow soft plastic ball. There were 8 per side. These catapults don't really work. I imagine a lot of frustration arose as kids tried to fire them at their carefully lined up troops. Probably the ammo was discarded and rolled marbles took the place of this "artillery". 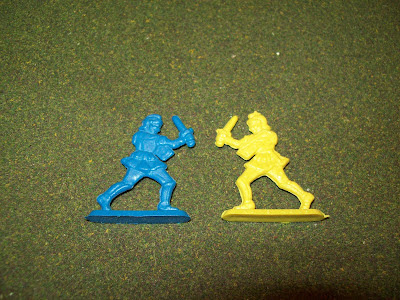 My favorite of the infantry poses, the 24 swordsmen per set. These closely resemble some of the fighting men depicted in the ad. 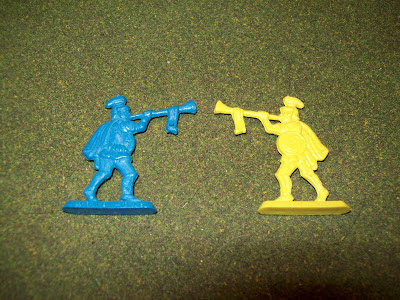 4 Trumpeters were in each set. 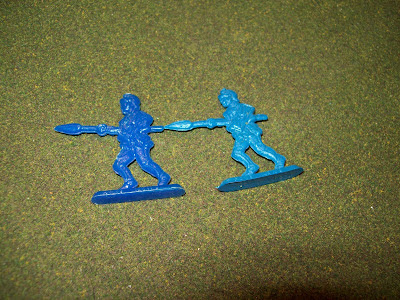 Spearmen illustrating the different hues found between sets. Also, some sets like the man on the right, were of softer pliable plastic. Even today you can bend them and they bend back in shape. The man on the left is of a hard brittle plastic that snaps at the slightest touch. This isn't "plastic disease" as one finds with old Airfix sets. Rather it is the nature of the plastic some of these sets were made of. I suspect that these harder sets were later, as the detail is less than that of the soft plastic soldiers. 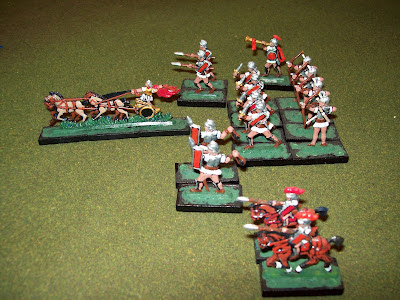 I painted a few of the brittle soldiers. At least on a wooden base, they stand some chance of remaining whole. 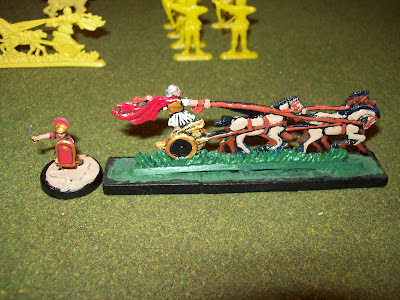 A comparison. An Airfix centurion (who followed Mark Anthony to Egypt to train Cleopatra's hordes, judging by the shield) next to the chariot. It is close to 20mm in scale. 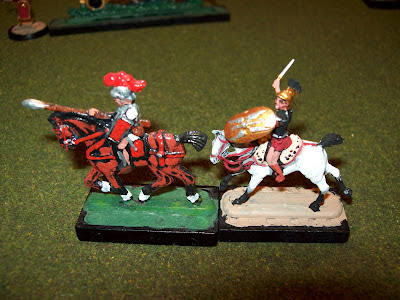 Mark Anthony next to a painted cavalryman. These figures, while flat, do fit in well with standard HO figures.


All in all they are a nice set for the nostalgic old man. The foot soldiers all stand about 1 1/2 inches tall from the bottom of the base to the top of the helmet. The cavalry are a fraction taller, usually just their plumes are above 1 1/2 inches. I found that the brittle soldiers had less flash and that their bases were flatter, so they stand better. The softer figures had some flash around the bases, and some bases are slightly warped, leading to catastrophic domino like collapses. In point of fact, it took me two tries and a glass of beer to steady my nerves just to line up the figures for the photos. I'm sure a lot of anguished and frustrated kids were heard yelling from the other room as their legions suddenly decided to lay down on the job.