There's a fantastic 20 minute proof of concept Star Trek film.
Not just a run of the mill fan film, it set a really high bar:
https://www.youtube.com/watch?v=1W1_8IV8uhA
They raised $21,000 on kickstarter to do this. Then they tried Kickstarter and indiegogo. Near a million dollars was collected and they began making a feature movie or a couple of hour long episodes.
Then CBS/Paramount sent the lawyers after them.
It's tied up in court right now.
Anyway, before the lawyers ruined everything, I picked up some items from the fundraising: 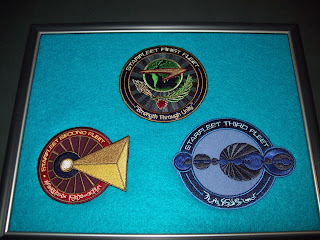 These are fictional arm patches for uniforms, the top a Starfleet one, a Vulcan one at left, and Andorian at right.
I mounted them on a felt sheet inside a simple picture frame. Kinda neat, I like it.
I also managed to get a couple of movie minis, these had been made by Andrew Bergstrom of Studio Bergstrom:
http://studiobergstrom.com/ 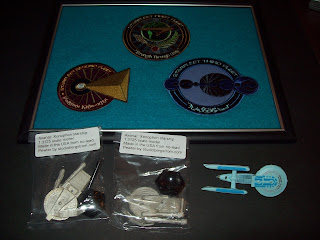 I placed a Micro Machine Excelsior next to the two "Marklin" Class ships.
Andrew Bergstrom did these as for the Axanar people, they aren't available on his website.
You might be able to get them, or what is left at:
http://www.axanarproductions.com/
I hope cooler heads prevail and CBS/Paramount hire these Axanar people and fire JJ Abrahms, he's an empty tank of gas.
As an aside to the lawsuit, the silly lawyers have declared that any Trek talk is now a violation of copyright.
Yep, NO St*r Fleet, Mr. Sp*ck, Captain K*rk, Kl*ngons, R*mulans, etc.
Now I can't tell you my joke about the St*rship Ent*rprise circling Uranis in search of Kl*ngons.
Sh*t.....

*****Update*****
Well it seems we've been had, or at least I was, as were a lot of people.
Turns out the director of the first 20 minute film, Christian Gossett, and his crew were basically run off by the guy in charge, who collected money from crowdfunding donations to serve as his personal resume to get hired by Paramount.
(sigh)
So the great fan film was made by pros who soon left when they figured out the scam.
Even Tony Todd (Candyman, Star Trek TNG and DS9) walked.
so those litt'e spaceships I bought and the patches are momentos of a confidence game played by a huckster in California.
If you're interested, here's a link to a June 23, 2016 interview with Prelude to Axanar director Christian Gossett:

"Inappropriate spending alleged by plaintiffs CBS and Paramount Pictures in their copyright lawsuit against Alec Peters led the producer to issue a statement November 18, 2016, denying he misspent money donated by Star Trek fans to produce his feature film, Axanar.

In a motion for partial summary judgment, the plaintiffs asserted that defendants Peters and his company, Axanar Productions Inc., raised, and spent, well over a million dollars, paying themselves, actors, and crew members, while renting out a studio (which Peters intended to lease out for other productions), to pay “tens of thousands of dollars of restaurant bills, to pay their phone bills, gas, insurance, and to travel around the country as the ‘producers’ of Star Trek: Axanar.”1)"

http://axamonitor.com/lib/exe/detail.php?id=summary_fact_check&media=warhammer.jpg
"WARHAMMER A December 2015 trip to London for a Warhammer 40K convention was one instance of international travel Alec Peters insisted was not paid for by Axanar donations. Photo/Axanar Productions"
Shame when a wargamer goes bad.......
****Update Dec. 13, 2016****

In a report prepared by its expert financial witness, certified public accountant Christian Tregellis, the defense disclosed Axanar had earned $1,428,902.43 from January 2014-October 2016. The same document showed Peters had spent $1,433,003.67 in that same period, incurring a $4,131.24 deficit23) — consistent with overspending previously documented by AxaMonitor’s analysis of Axanar’s 2015 financial report."
I never thought I'd quote Johnny Rotten of the band "Sex Pisols", but, "Have you ever felt that you've been cheated?"