I fought a wee battle with these fine figures now that I took the time to set them out. I started adding in mounted Hinchliffe officers and artillery etc., and I thought, "Nooo, just use the figures to hand".
So what follows is a simple fight using the rules in Stuart Asquith's book "Military Modelling Guide To Wargaming". Due to the number involved, I did away with volley fire and instead let each figure fire. Range was 12", with 6 " close with a 5 or 6 a hit. Over 6" a 6 is a hit. I also did away with morale and changed the melee. I let the points stand (1 per foot, 2 per light horse) and counted them as dice to roll, a 6 is a hit. Here's the basic table, with converged battalions of 20 on the French side, and four battalions of 10 on the British side. 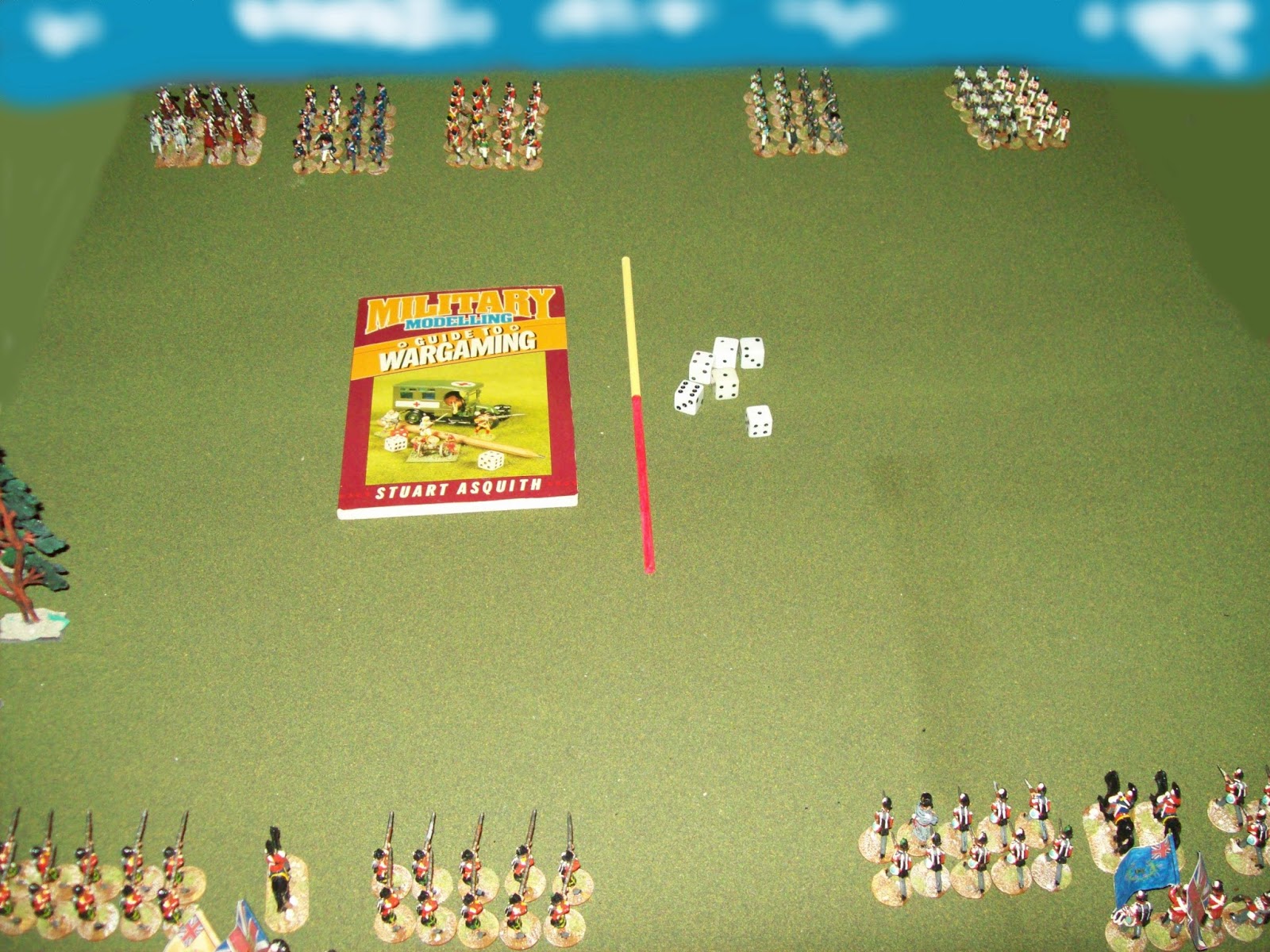 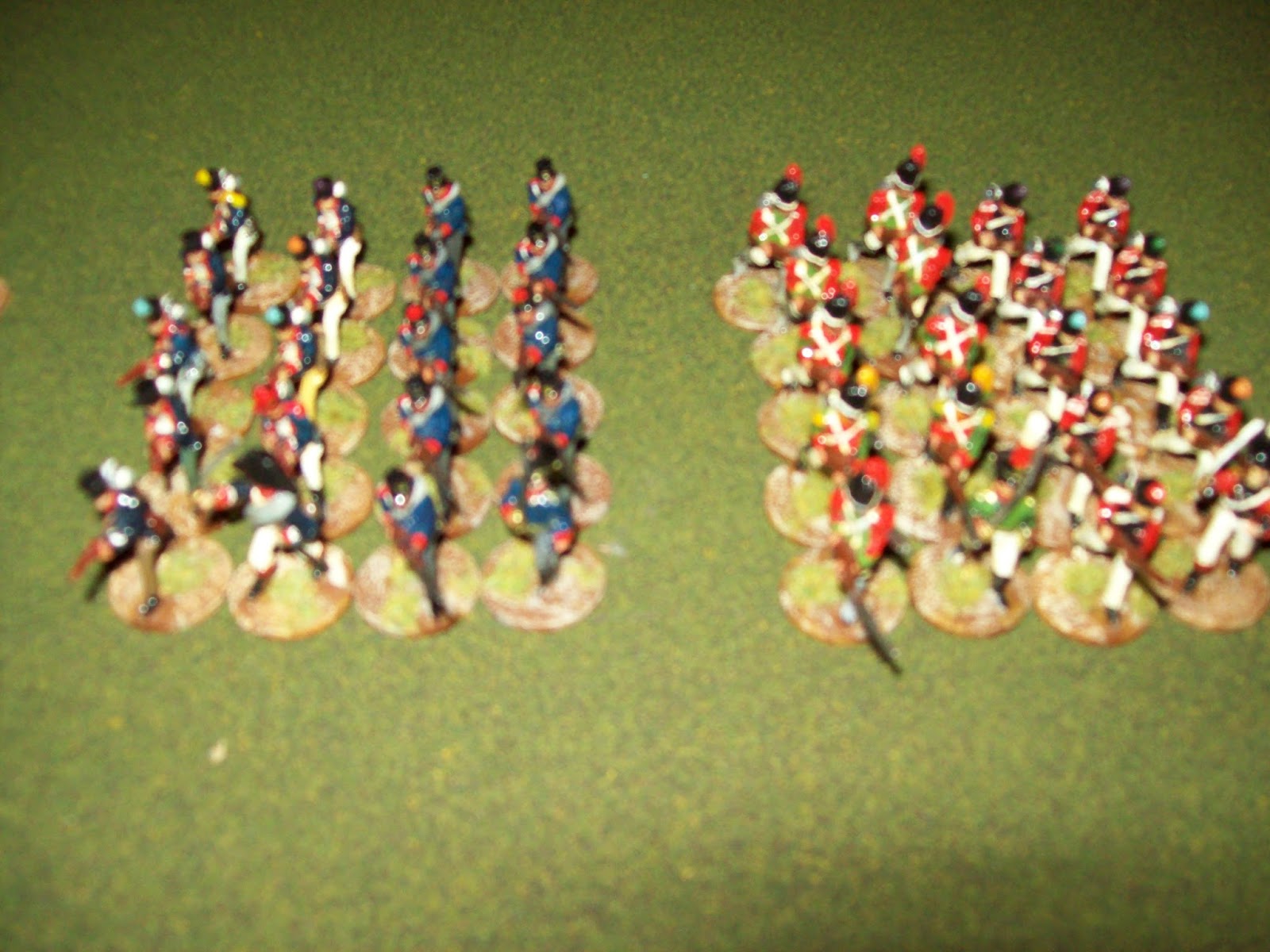 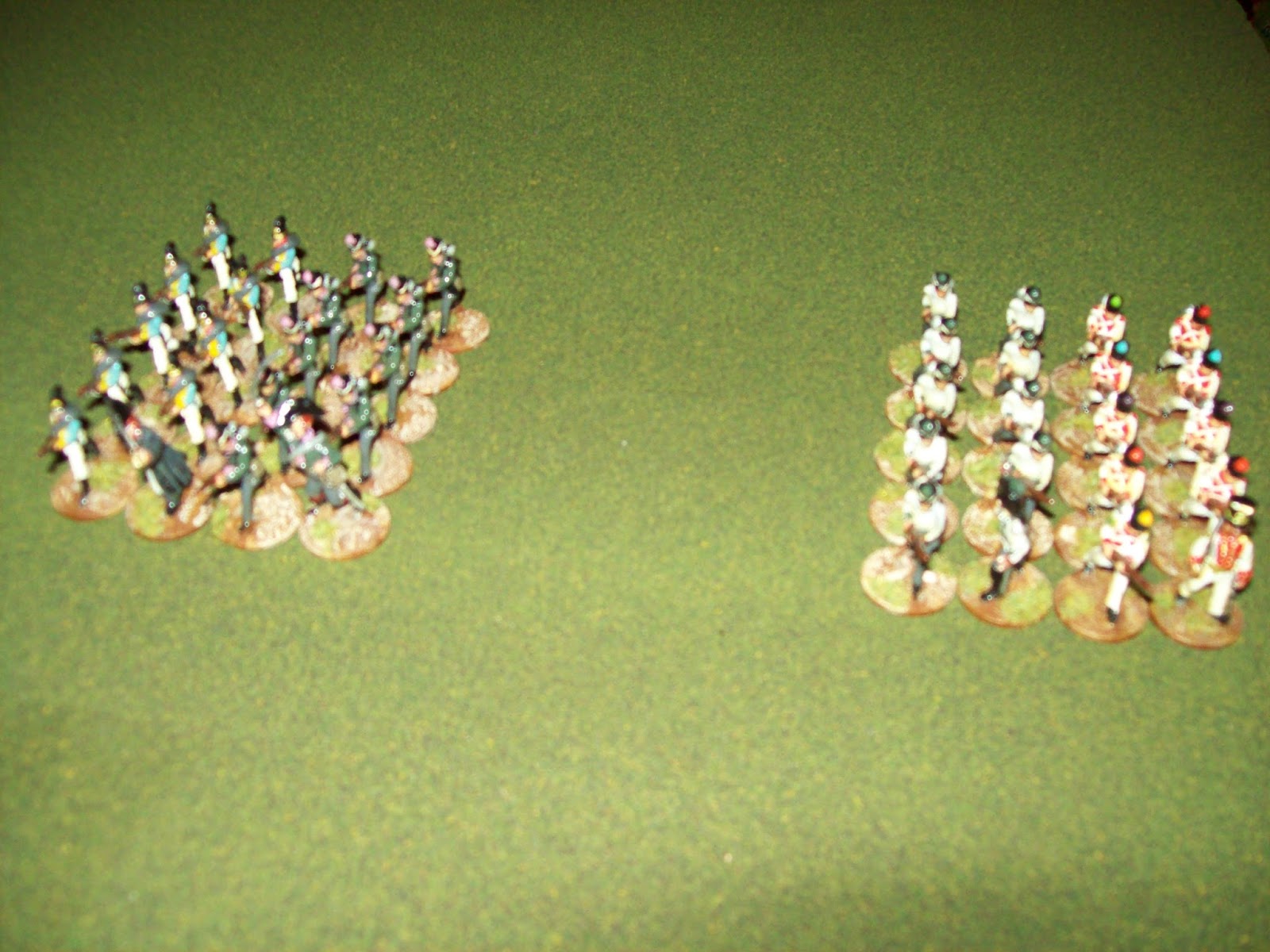 Sorry for the blurry photos. I count on the sun to add to the light when I photograph, and today was the gloomiest snowy day in a while. I had to get an extra lamp from upstairs. This is the basic layout for the fight. French columns advancing on British line. Two ranks can fire, so the French are at a disadvantage. "They're coming on in the same old way..." 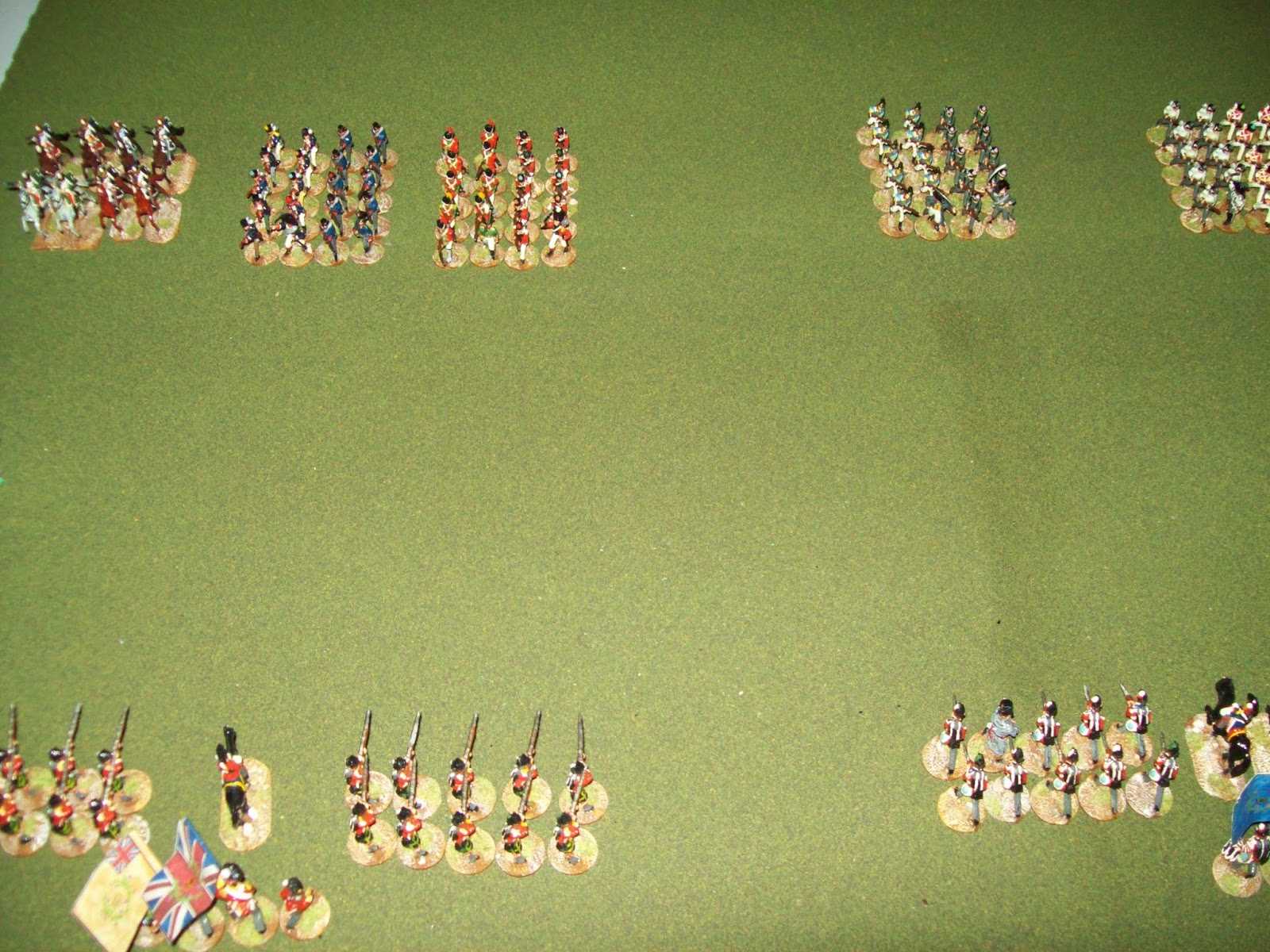 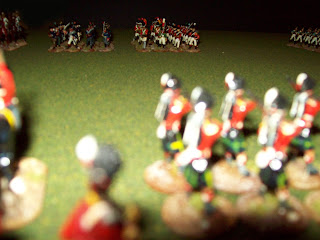 A view from behind the 92nd. 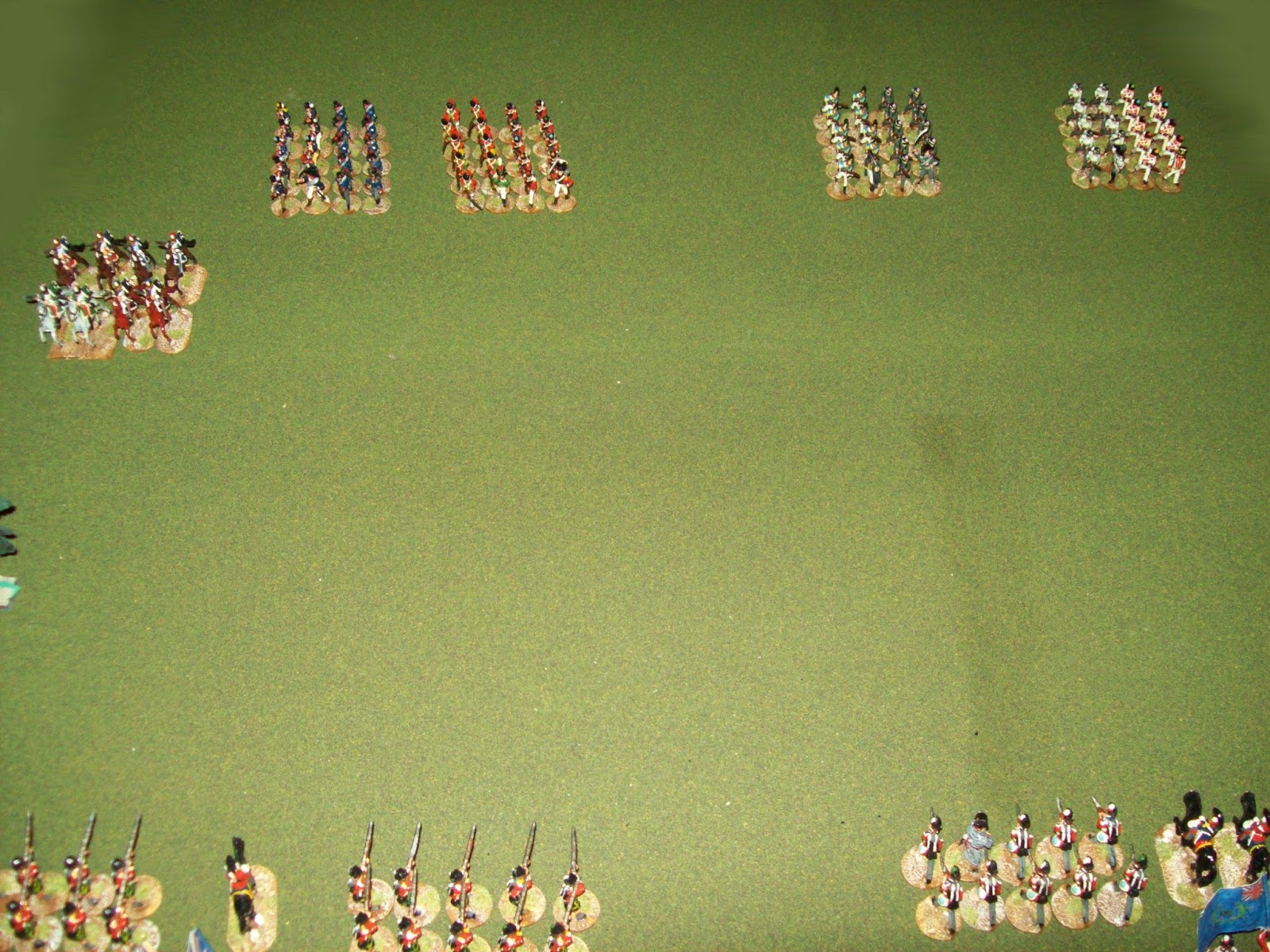 The advance continues as the "Pas de Charge" beats. Those hussars look menacing on the flank.... 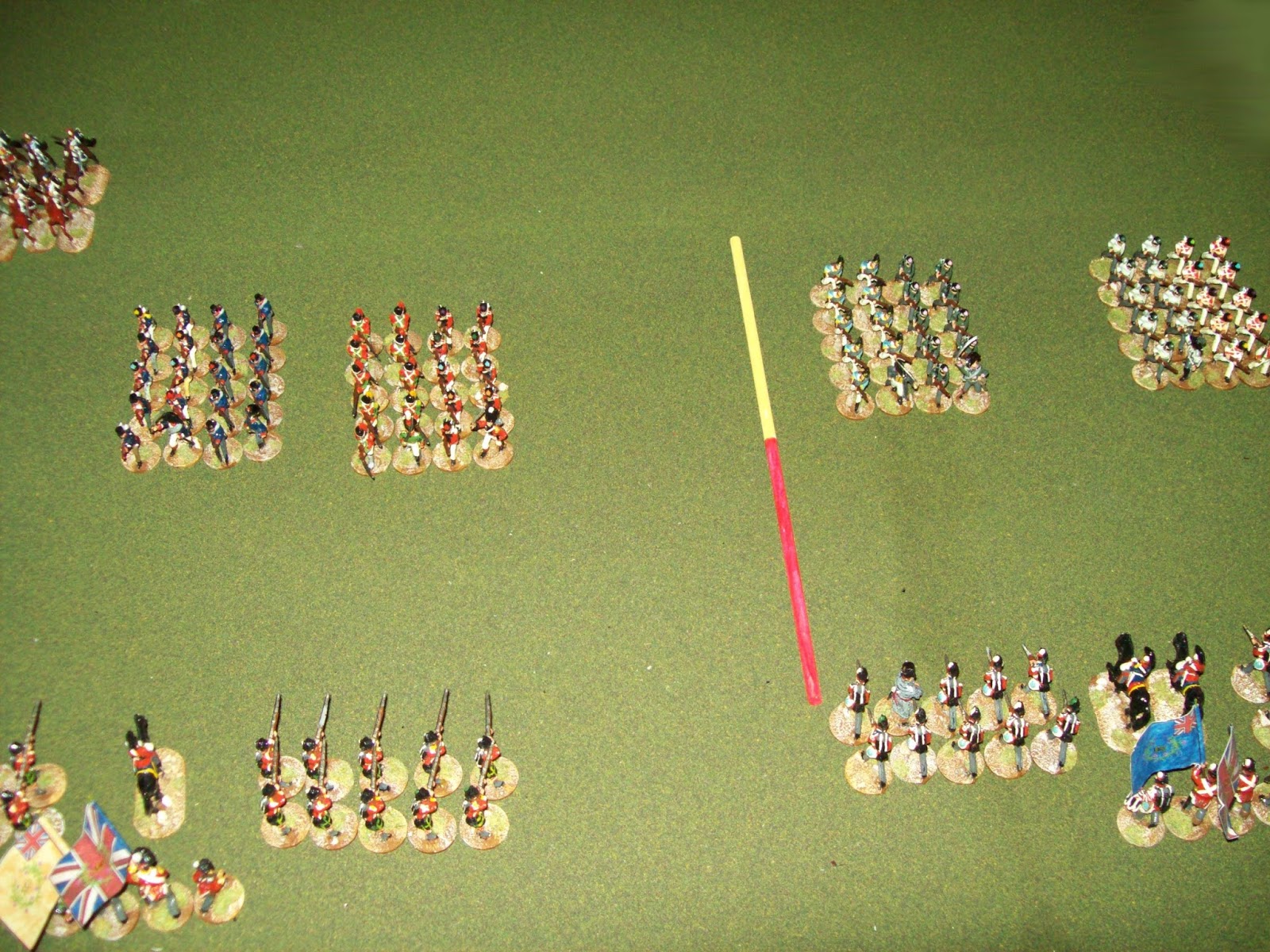 The French columns are within musket range. The tension is about to break... 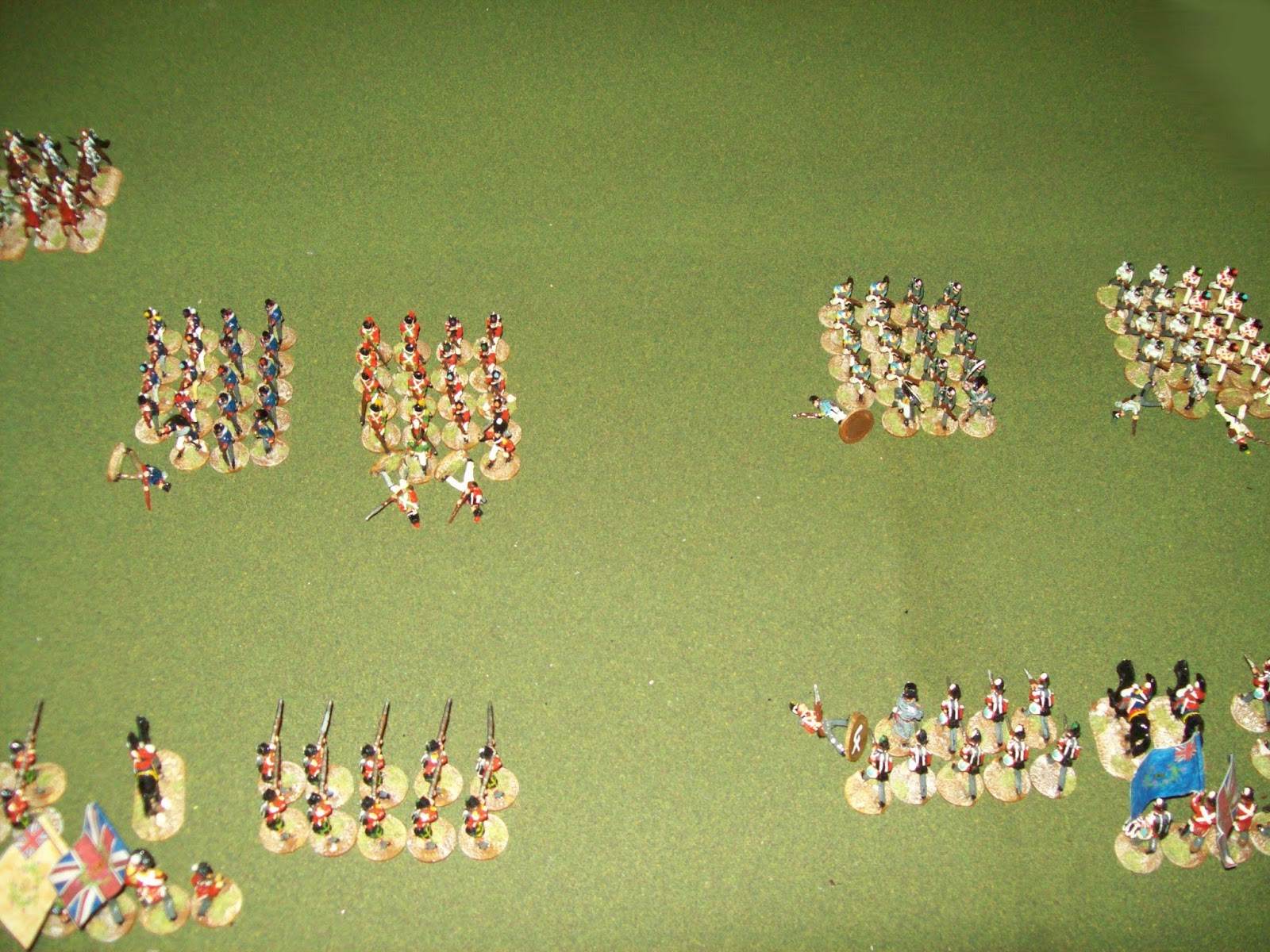 A handful of casualties. The columns halt and prepare to form line, if they can... 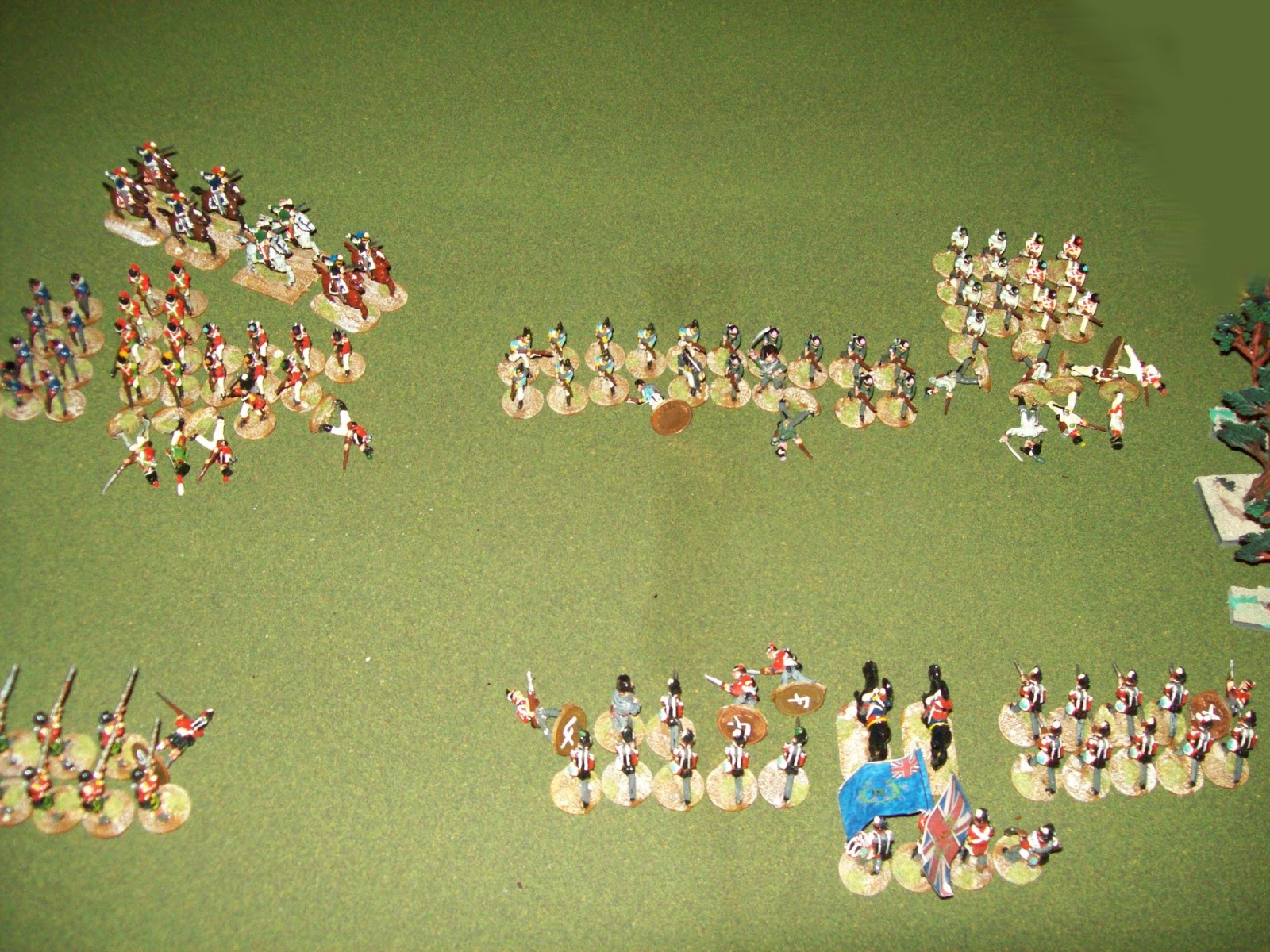 The French deploy to engage in a musket battle, but the tight confines of the field mean that many soldiers are stuck in column. Those Hussars are doing some fast movement in the center. 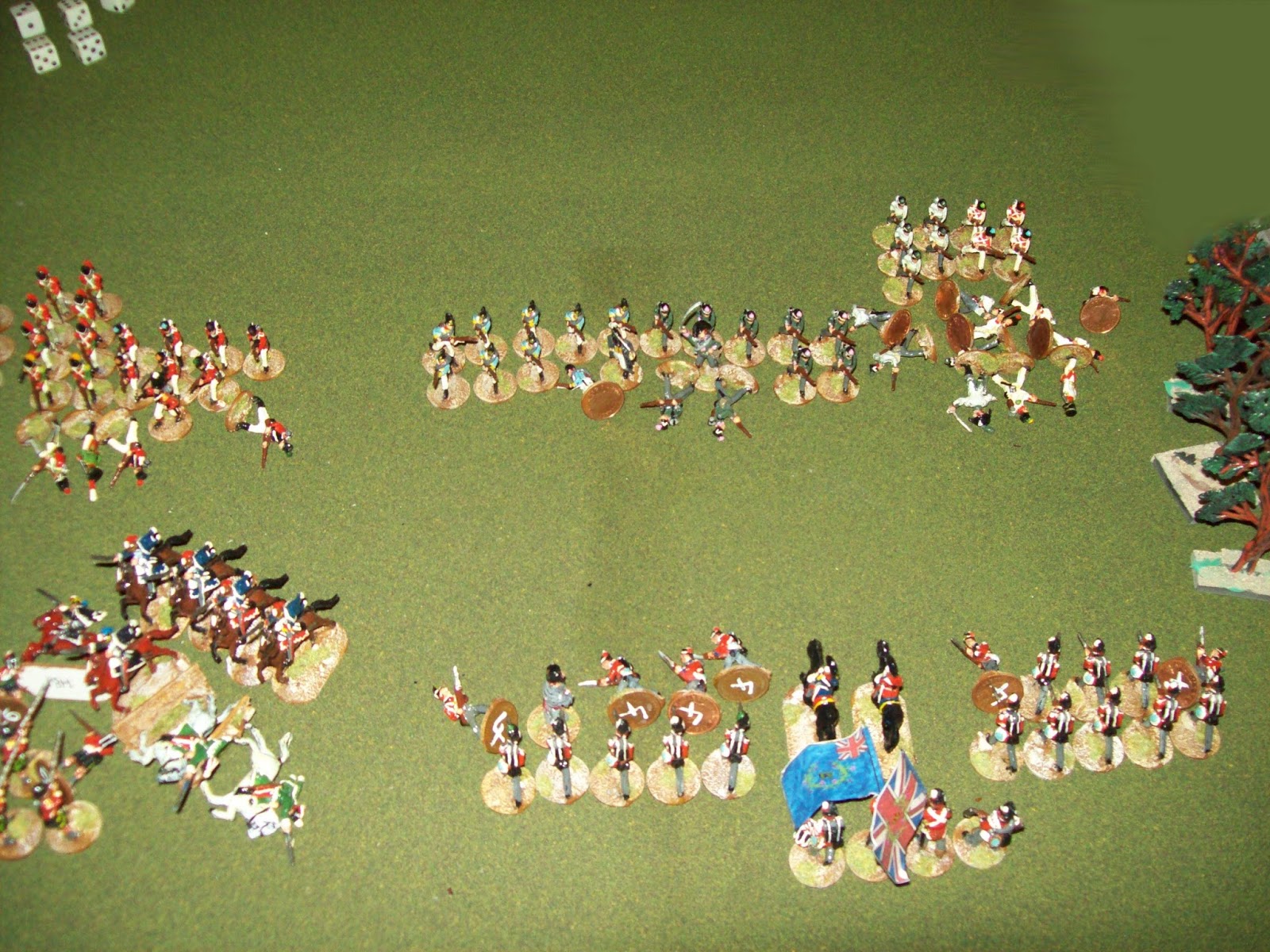 The hussars charge the 92nd Highlanders. Echoing future glories, they shatter the front rank with precise close fire, the hussars are just short of contact. On the right, the desultory musket battle is interrupted by an amazing volley by the 4th Foot, who shred the first two and a half ranks of the column!
Surely morale and good sense would see these men off, but they are made of sterner stuff, and they close ranks in grim continental determination... 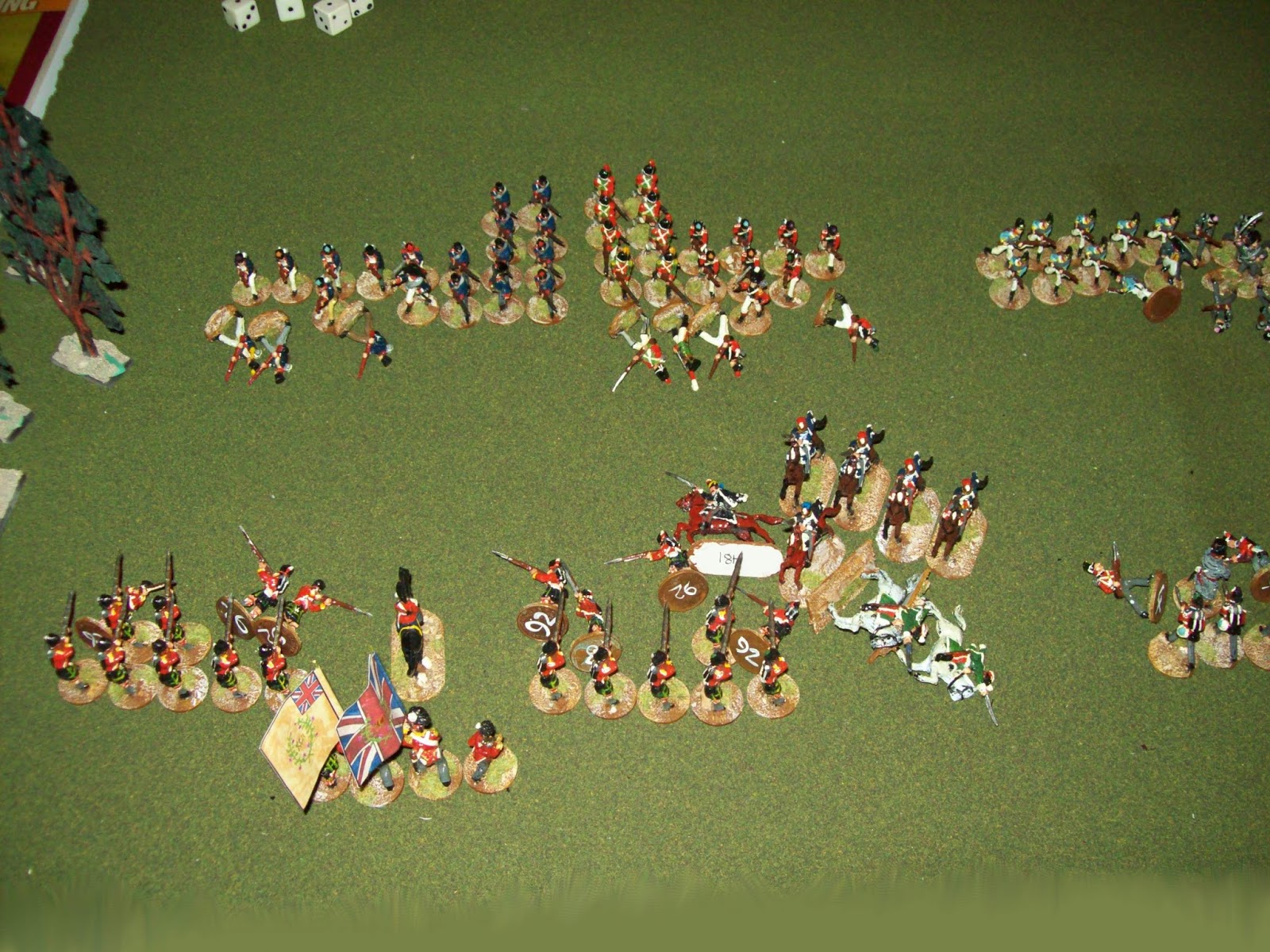 The 92nd takes some stick. Better musketry from the French reduce the left flank, as the right flank Highlanders engage in hand to hand combat with the looming hussars. 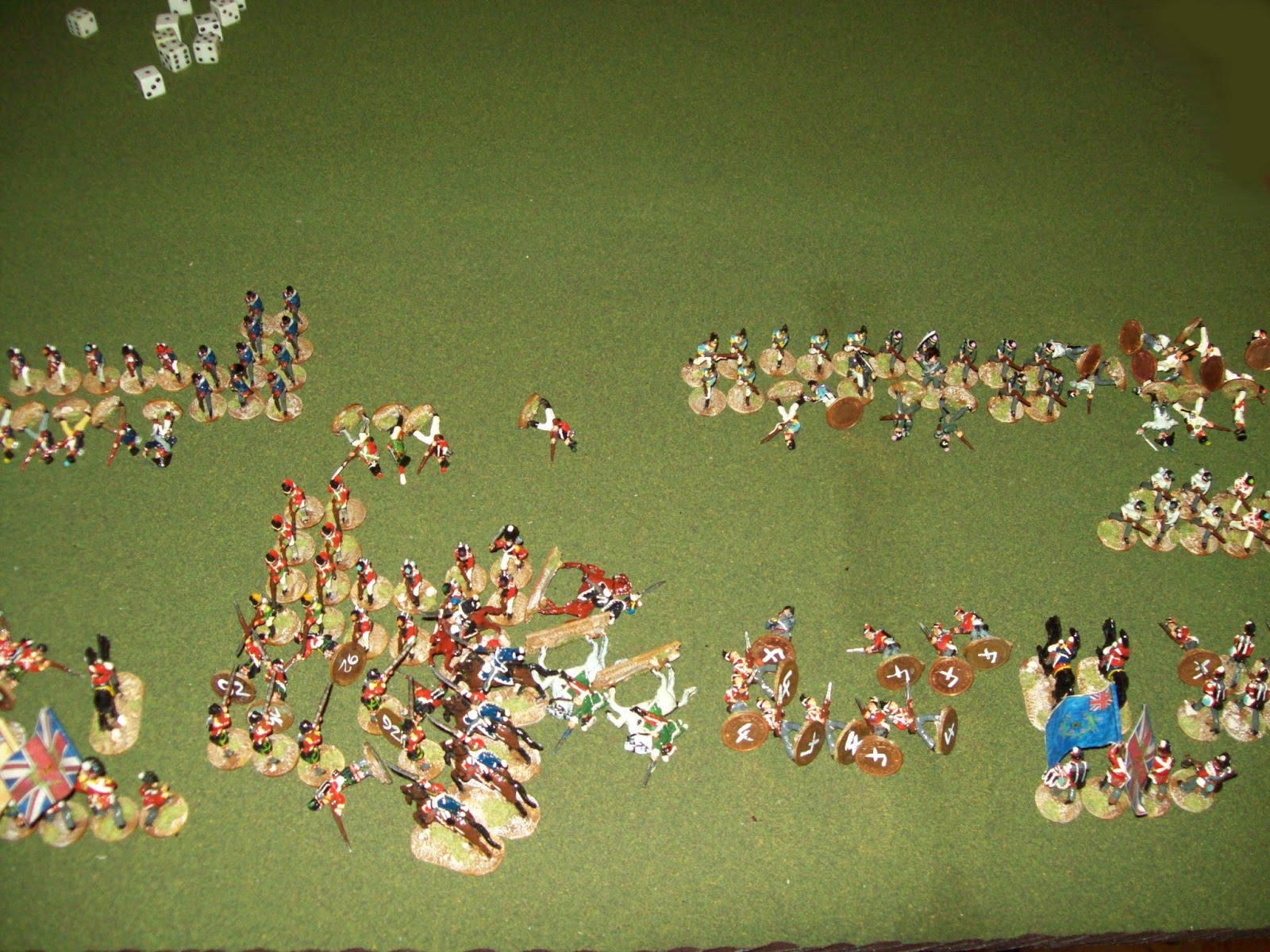 Bad dice throws! The 92nd Highlanders begin to dissolve as the French add a column attack to the swirling melee. On the right, half the 4th Foot are laid low by a devastating volley from the converged Bavarian/Confederation battalion. There will be steins hoisted in victory tonight as the British line collapses and begins to withdraw.


A fun little game.
(*edit* I have no idea how I ended up with giant photos on my blog.
Seriously, no idea.
At any rate, I'm leaving it as is, and I apologize to one and all for the odd sized photos and strange arrangement.
And I stand by the judgement that it was a fun game)
Posted by Doug at 8:33 AM