An Inherited Import Well Worth The Effort 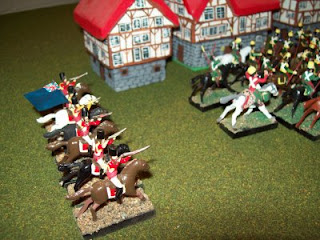 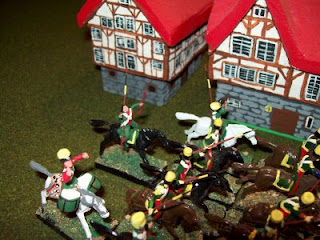 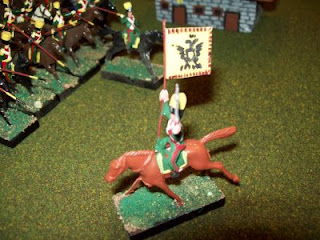 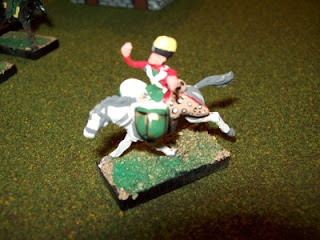 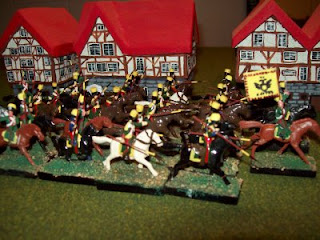 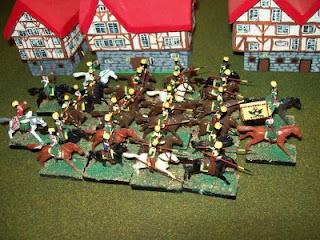 About a year ago I won an Ebay auction for several groups of painted toy soldiers. They were the usual assortment of well used and loved Airfix, with shiny enamel paint slowly chipping off. In this lot were 3 groups of 20 cavalry all from converted Giant Ho scale cowboys and indians! There was a blue French regiment, a red bearskin Scots Greys looking unit, and an Austrian Uhlan looking group made up of Giant and Airfix figures with long sewing needle lances. I have long been under the spell of Messrs Charles Grant and Charles Stewart Grant, and their many published works. This wargames find was a real bit of nostalgia for me, as some 25 plus years ago I too took Giant cowboys and indians and made them into Napoleonic cavalry, a mania fueled by late night films like "Waterloo", "War and Peace", and the later "Charge of The Light Brigade".
Anyway I needed to flesh out the unit to 24 ranks and add 4 officer/bugler types.
The ranks were easy enough to accomplish, though I used florist wire rather than the murderous lances of old which have claimed more fingers since arriving in Canada than enemy soldiers. I made an officer with raised hand, a flag bearer from an indian with a raised sword from a cut down spear, an officer firing whilst retreating, and a most ambitious and fictional kettledrummer who must have been a real tartar to keep his drums going at a full gallop. The flag is suggestive of Austrian, and is a square of hobby foam painted yellow then detail added. The unit originally had plastic sprue "chapkas" made from round sprue. They were painted but they weren't 4 cornered, so I honoured the look by making the new recruits the same. The kettledrummer's tiger skin and drums set are just painted plasticne. I have yet to touch up the original soldiers paint chips. The owner painted them all in full gloss enamels, and I use flat acrylics, so I have to track down a matching tin of Humbrol. Anyways, these are a fun set and really "Old School", and I am proud to have them. Their original master was clever in painting their lance pennons as wrapped around the lance so I did the same. I might make full ones yet. You can also see in one picture they are being pursued by another such unit, the erstwhile Scots Greys, whose horses will need some attention. I also took the liberty of facing the shooting men forward, as the orginal Giant figures always fired to their sides. I glued the cut figures with JB Kwik, an automotive epoxy. I also used it to secure the spindly Giant horse legs to the domino base, which is flocked sand and painted. The buildings they are passing are carved florist foam and painted by yours truly with acrylics.

The Scots Greys are coming along... 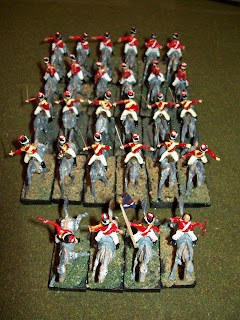 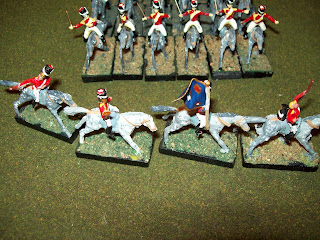