This is going to be, I hope, an ongoing post as I add more items.
We've all seen those old comic book ads offering wargames to kids for a couple dollars.
I'll start with a couple incomplete sets that I have.
Helen of Toy Fighting Ships + Convoy Terror

These are basically the same sets under different names.
Here are the ads, some of which varied over time. 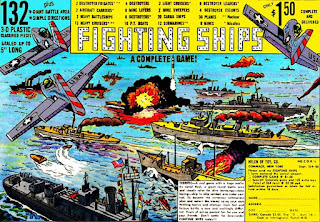 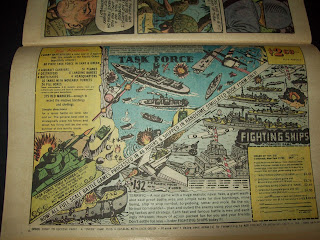 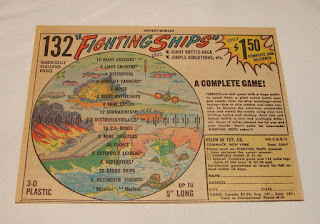 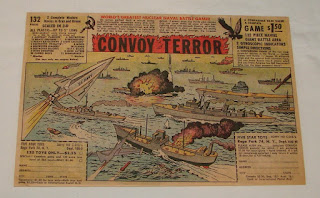 The basic game had 132 pieces. I don't have them all. What I do have is here: 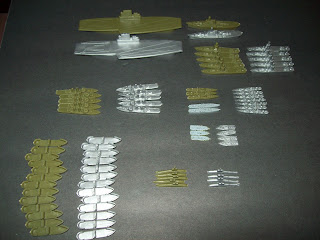 Two identical fleets of 64 items:
2 Aircraft Carriers
2 Battleships
12 Heavy Cruisers
2 Light Cruisers
2 Destroyer Frigates
4 Destroyers
8 Destroyers
4 Destroyer escorts
6 Destroyer leaders
20 Cargo Ships
8 Mine layers
2 Mine sweepers
12 Submarines
10 PT Boats
30 Planes
8 Mines
Now if you read the rules, many of the ships are designated by markings underneath the hull.
For example, the Cargo Ships are also the Mine Layers and Mine Sweepers.
The destroyers are differentiated with numbers under the hull.
In my photo you can see I have an incomplete set. I have never yet been able to track down the tiny planes for the game, or the little mines. You can see them though, at Thor's Trains website, where they have an article about this and other Helen of Toy Games:

Here are the rules from the set I have: 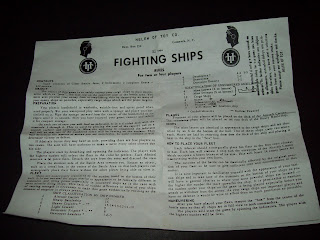 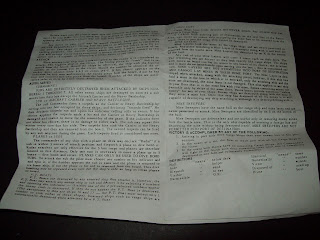 Of note is the stamp on the front page: 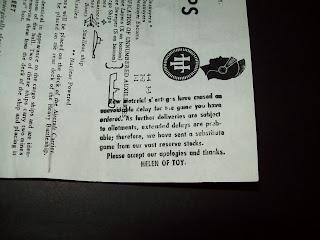 This set was a replacement for another on that was ordered, but was out of stock.
This is how I ended up with Supreme Command. 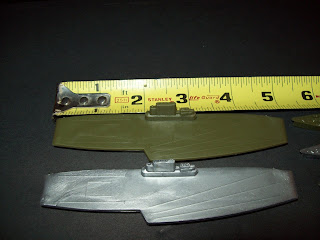 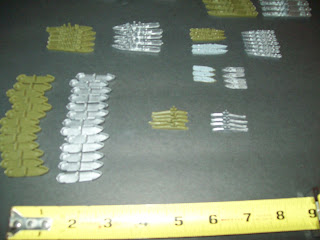 The ships are all about an inch to 1 1/2 inch long, except the carriers that are 5 inches long.
What I'll do in the future is flesh out this set and create a new map board to game the rules.
BTW a quick look at the rules show them to be a mix of Stratego and games like Dover Patrol. There is some level of the unknown and combat is resolved by pieces with the higher number winning and removing the loser.
It is quite possible to redo this game or one like it by using some available game pieces from the Axis and Allies games:
https://boardgamegeek.com/boardgame/41863/axis-allies-1942
There are a large number of these games available now. There is the original set, then other WW2 campaign sets, and a WW1 set. They  have 300-400 minis inside so they are a real source of new ships.
There is also a company called Historical Board Gaming that makes very reasonably priced models to go with the Axis and Allies games:

I've ordered from them a couple times. They are fast and the minis are very nice. The ships will have their class name under the hull. They even make tiny tanks like Sexton APC's and Canadian Ram Kangaroos. Aircraft are many and varied, including Rata I-16 and Sturmovoks and RAF Barracudas.


The other game I'm looking at is the residue of my old game, Supreme Command. 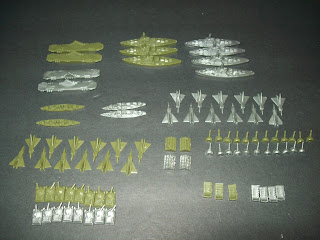 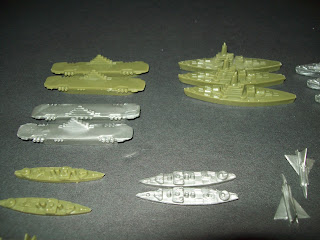 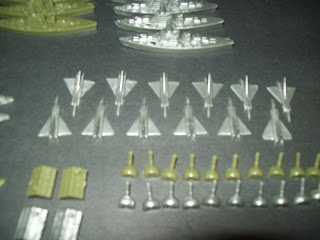 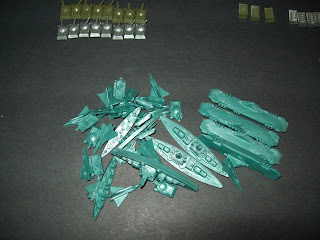 THis was an air/land/sea game with cardboard counters for infantry. The game had three kinds of ships, Carriers, Battleships and a Cruiser. Land units are two piece tanks, simple artillery markers, headquarters huts, and small landing craft to carry the troops. The planes are delta wing Mirage look alikes.
Here's the Thor's Trains article:

The interesting thing about these games is the "board" which is a small vinyl plastic sheet. You use a damp cloth to wipe a smooth table, lay the map board on the damp surface and push out the air bubbles, just like wallpaper. The sheet sits tight until you are done and peel it off..

Instead of dice, both games had a spinner with numbers 1 to 6. Supreme Command had combat resolution using a cardboard and metal spinner you flicked (IIRC). The spinner also acted as a six sided dice. The numbers were printed around the card.

These games would make great pieces for a home made wargame.
As for rules, I really like this book: 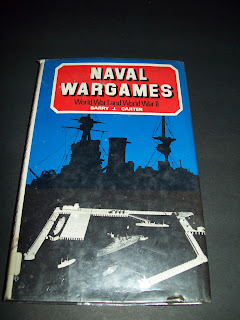 There is a simple set of rules inside that covers air combat, torpedos, supply and gunfire. I've played them before, on a square gridded board, and they are fun. The author espouses 1/1200 models, but these tiny ships work really well.

A few other titles I have are Donald Featherstone's book, Paul Hague's book and a Peter Dunn title. 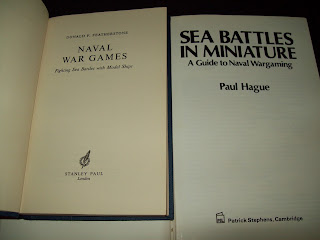 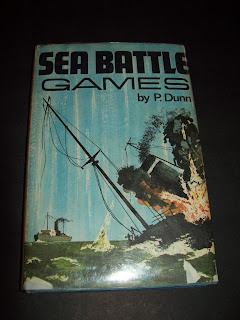 Featherstone's book is not very helpful. Very simplistic and general, it isn't much help. Also the focus is on earlier historical periods.
The PSL book by Paul Hague is noted for the miniatures sea game with triremes.
The Peter Dunn book is quite detailed and fascinating, but largely focusing on steam ironclads.

Another source for aircraft are the 1/700 sets of planes from Japanese companies like Fujimi: 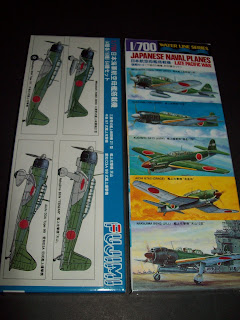 30 - 40 planes for under $10. They make Japanese, American, British and some German planes.

Well that's it for today, I will keep adding to this page as I go along. I occasionally pick up a few pieces of these games in bags of toy soldiers. A complete set of Fighting Ships usually fetches $75 and up. Unfortunately the interest in these old nostalgic toys has fueled the greed of accumulators looking to make a quick buck, instead of the spirit of play the games intended.
Posted by Doug at 12:54 PM