Now For Something..Ahhh, You Know The Rest... 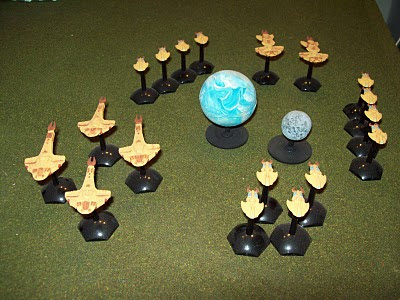 These models are from Drew at Studio Bergstrom. He's a 1 man outfit that casts some incredible space ships and fighters:

Very reasonable and fast service. The minis come unpainted, and are metal. He also sells the bases separately. 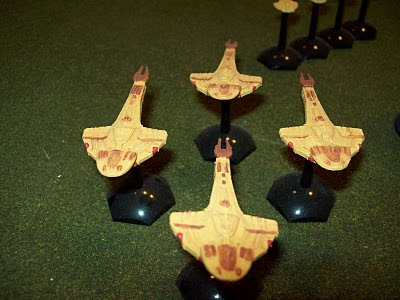 I have double this amount from Drew. These are what I have painted so far. The planet and moon are just styrofoam balls painted and mounted on a bulletin board pin and a poker chip. 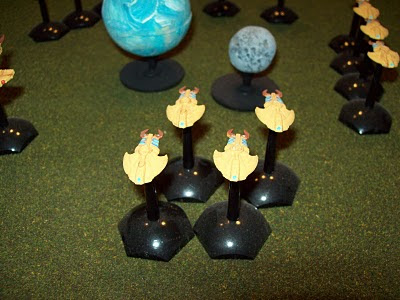 What I need now is a Hotzmat!

Look What I Found! 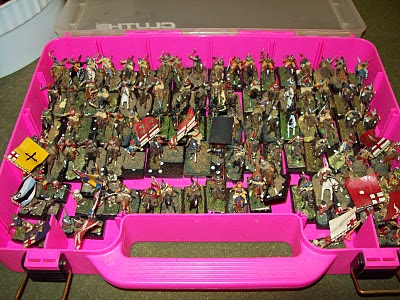 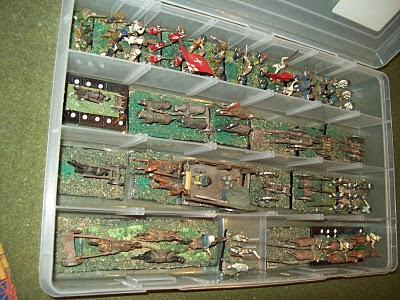 About 6 or 7 years ago I won an Ebay auction for a load of Airfix English Civil War soldiers. Inside the large box were these gems, plus a plethora of half finished and some newer plastic miniatures. Anyway, I was digging in the basement looking for something else when I found these two containers, which have the bulk of those painted minis. I had taken the time to mount them on my favorite bases, but had done little else. I believe I got them from a man named Coombs from England. Just amazing stuff. Almost all Airfix conversions from all eras. Remarkable work. There are more, including heavy and light guns about, and dragoons and horse holders. Hopefully I will set aside some time to flesh out these units.
Posted by Doug at 5:33 PM No comments:

Here are some Napoleonic French Dragoons from Airfix Waterloo French Cuirassier, most of which were losing paint and without horses. I dug through my bags of figures and made up enough to have a unit of 24 ranks and 4 officer/trumpeter figures. Most were painted in Humbrol enamels which have faded and chipped. I use El Cheapo acrylics by and large, the kind you get for a dollar, like Folk Art and Decoart, Ceramacoat, Apple Barrel etc. Most uniforms were faced with pinkish hue, probably Aurore, a salmon pink/"orangy" colour peculiar to Napoleon's armies. I made the decision to paint them a pink, like the 17th Dragoons, which means I'll have to green up many a collar. Unfortunately the facing colours don't match up on film. They look pretty good in natural light. I made a kettledrummer, based on the Airfix Hussar one. Again, not historically accurate but OK for me. The flag is also inappropriate, but the original-painted foil- is in absolute tatters so this will do for now. 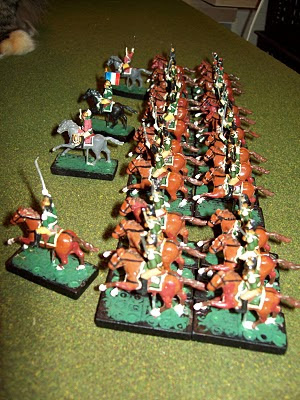 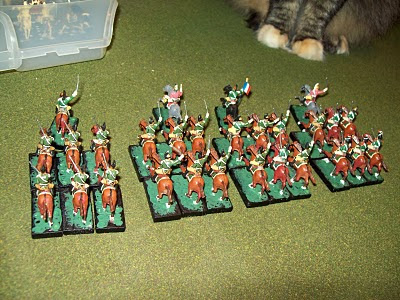 I made a 3 man half squadron of Elites with Italeri Grenadier bearskins. I also tried a Vallejo paint on these.My God, those paints go on well, but the colours are very vibrant, almost neon! I'm used to coaxing life out of older bottles of Folk Art paint. This stuff is amazing. I bought the metallic ones to replace my aged Games Workshop ones and I am impressed. So bright! 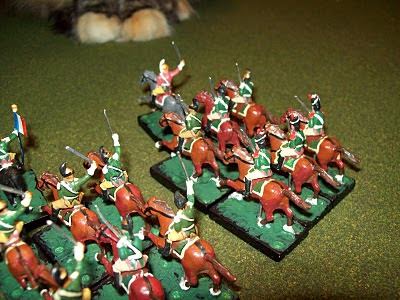 The horses are Airfix with a floral wire pin through the wooden domino base into the horse and fixed with PVA and Krazy Glue. The base is painted green and awaiting some GW flock. I finished the figures with some Sharpie pen outlines and a coat of PVA glue.
These guys are next in the queue. Some French Chevaux Legers Lanciers, again rescued from an Ebay bag of goodies. 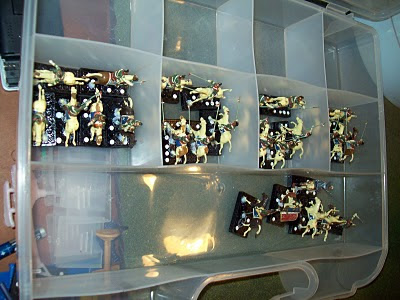 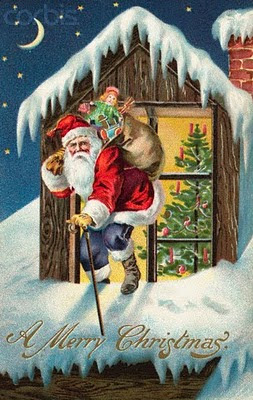 I hope you all have a safe and Merry Christmas and a very Happy New Year!
Posted by Doug at 12:45 PM No comments:

I have quite a few riderless horses, and I have a shortage of heavy Ancient/Dark Age cavalry. So I took some automotive gasket silicone and made a simple mold of a figure. The mold was terrible and the figures were what you might call "naff". I did 2 large batches and this is the second, with floral wire spears and a printed Russian iconic banner. 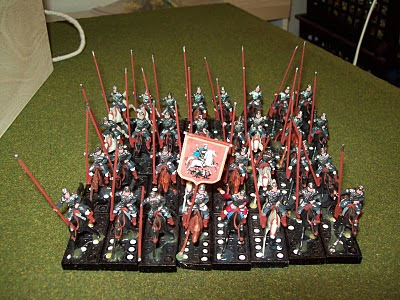 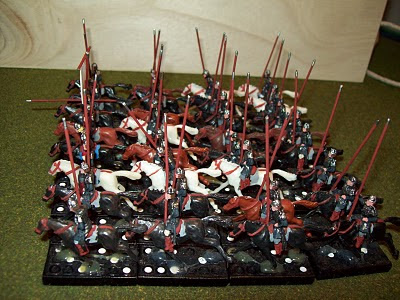 My 1st attempt with these guys was about 10 years ago,and they weren't too successful. I had no end of trouble with the spears, and indeed there are several types in the unit. And blobs of hot glue gun residue as moot testimony to my frustration. Back then I used green plasticine as base cover and I used Minwax Tudor Wood Stain to "Miracle Dip" them. But just check out that Russian banner! How's that for announcing you've arrived on the battlefield? P.S. The horse needed crutches after the first action....


The buildings are dollar store christmas stuff, suitably woodsy enough to be Russian... 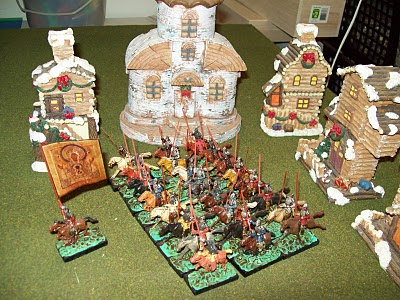 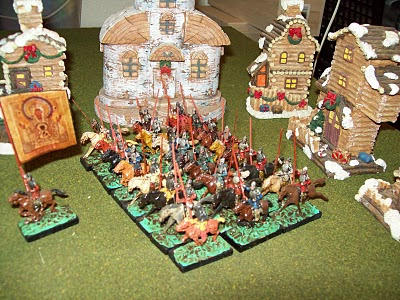 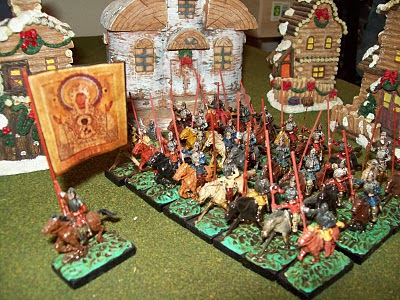 An Old School Attempt To Make Use Of Odd Figures

I literally have a few thousand of the 25-28mm plastic Marx recast of the Captain Gallant Figures. Some are fine as they are, but many are just strange and silly poses. Arms and weapons are akimbo, they don't stand up very well. So I decided to try something. I was reading "the Battle of Konnigratz" by Gordon A. Craig (C. Tinling & Co. Ltd., Great Battles of History series) and I was inspired by the images in Richard Holmes' "Epic Land Battles" (isbn 090740801x).

Waterloo miniatures makes the Austrians in 20mm plastic, but I didn't want to spend a lot. So I decided to use up those pesky Marx copies. I painted them white, with blue trousers, and made back packs from plasticene. I did the faces and guns and used a Sharpie marker to do some minor details. The only real trouble is that the poses are so odd that they do not stand well next to one another. There are too many bits sticking out for them to even stand next to each other on their bases. Oh well, I will forge on. I did 2 units of 48, the officers, drummers and flag bearers are coming. I made 1 unit of Airfix Hussars as Austrian Hussars, somewhat fanciful, and some artillery. I even threw in a supply unit from a Hong Kong toy. There is a great blog with images of the real soldiers here:
http://1815-1918.blogspot.com/2010_07_25_archive.html
Also there is a good article in Miniature Wargames #47 by Luigi Casali. Incidently, this issue also has N. Henry Hyde's first article entitled "Ficticious Wars", introducing Prunkland in a very Grand Old School Manner. 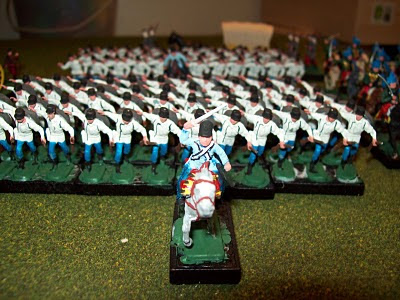 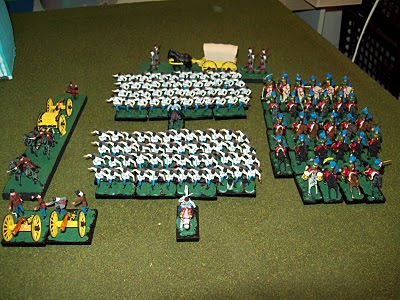 I've been digging through my eBay finds and repainting the half painted and chipped models of old. 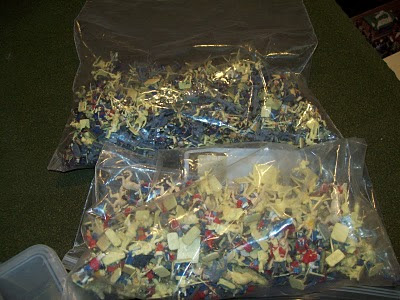 I made 2 units of hussars from Airfix Waterloo British Hussars models. I removed their bases, and used a piece of 18 gauge floral wire to hold them to the wooden domino base. I also used the method of white glue with a drop of cyanoacrylate glue to fix them. It forms a very strong bond. I then coated the figures with undiluted white glue (PVA) to protect the paint. I touched up with acrylics, but the original paint is enamel and flakes easily. The Airfix hussars are dressed similar to the French 4th Regiment of hussars, but with busbies. 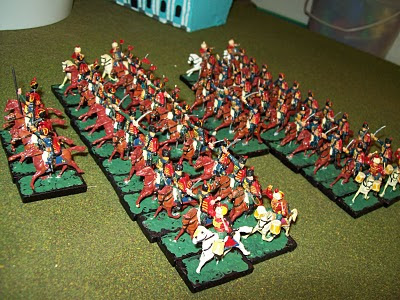 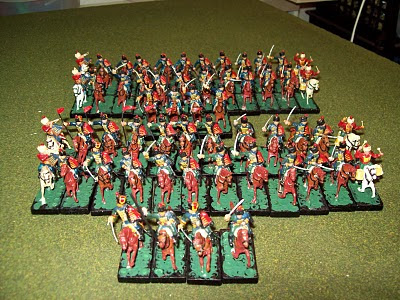 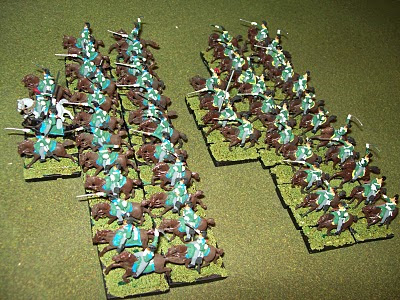 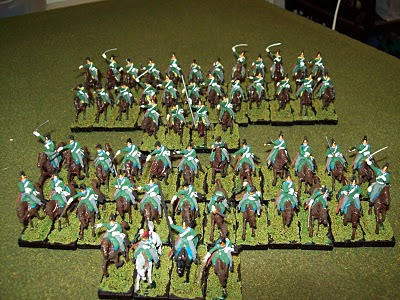 I finished the 2 units of Hat Industrie Russian Dragoons, but I haven't done the flags yet. They are 24 troopers with 4 Officer figures each.

I've been working on quite a few Airfix French infantry as well. 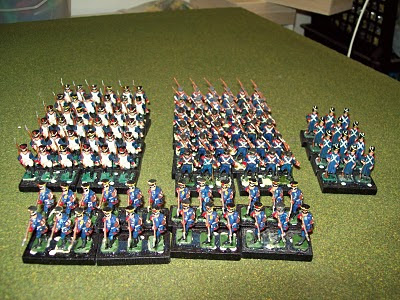 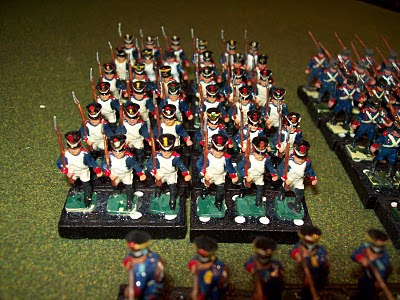 I have found several styles of cheap wooden boxes to use as storgae. The cost between $1 and $2 each. The large wine bottle gift boxes are great for lances and flag bearers. 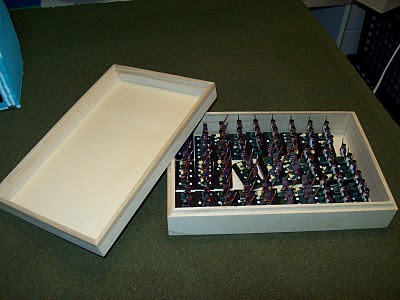 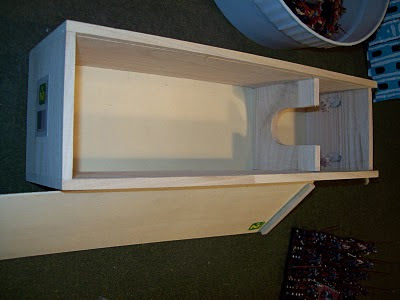