I have had access to some old family photos, and I took the time to take some photos and reflect on those who came before us.

Several family members have served in both World Wars, and I thought someone might be interested in what I found.

My Grandmother on my father's side was from the Selkirk, Manitoba area. In fact a small community called Elma.

Here are some of the photos and post cards from the young men who signed up for the Great War. 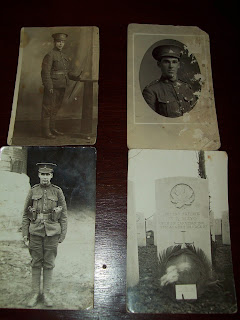 These two are brothers of my Grandmother. Great Uncles in the common parlance.
The man on the left is Fred Mayo. On the right, his brother William "Bill" Mayo. Fred's photos are post cards and one has a short message, "To Mother from Freddie".
Bill was killed on August 9th 1918, age 27. A picture of his grave reveals his number, 267233 Private W.R. Mayo, 5th Battalion, Canadian Infantry.

I tried to use the online Commonwealth war dead website,

but I had no luck. Thank you to Man of Tin Blog, which found the information for me.

See the comments below. 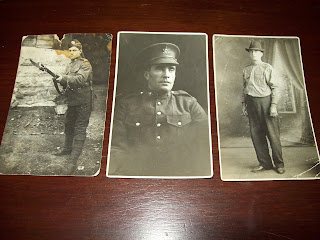 The center photo is my Great Uncle Freddie, I believe, but the hat badge is different, and there is no writing on the back of the photo.
The young man at left has a Glengarry bonnet, I don't know who he is. However both he and Freddie are standing in front of Minto Armouries, a beautiful old building still standing today. It has a unique ramped entry way, and I recognize it.
http://test.winnipeglovehate.com/wp-content/uploads/2014/02/11456673966_8588d1a1a3_b.jpg

From wikipedia:
"The Minto Armoury is a prominent and historic structure in the West End of Winnipeg, Manitoba. The armoury is currently the home base of The Royal Winnipeg Rifles, The Queen's Own Cameron Highlanders of Canada, and several other reserve units. The building remains an active military structure. It is noted for its smooth integration into the character of neighbourhood and remains a local landmark, both factors have help to certify the Minto Armoury as a Recognized Federal Heritage Building.[1"

The fellow on the right is Private J.L. White
No. 267227
D Company
13th Platoon
214th Battalion
Camp Hughes
He must have been a family friend. 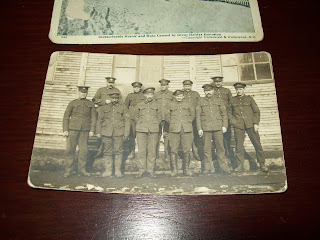 This is another unmarked post card with several NCO's and privates. A lot of rubber boots and no puttees, must be fall or spring time.

An interesting post card from 1918, showing "The undescribable Horror and Ruin Caused by Great Halifax Explosion" 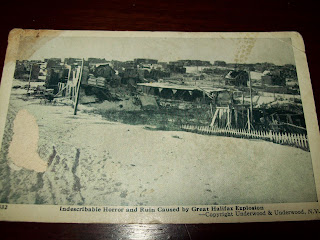 Here are two post cards with a lot of writing on back: 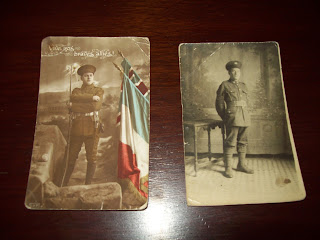 The one on the left has this: 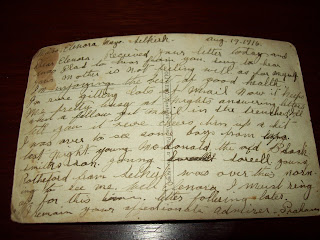 Dear Elenora. Recieved your letter today and was glad to hear from you. sorry to hear your mother is not feeling well. As for myself I'm enjoying the best of good health. I'm sure getting lots of mail. How it keeps me pretty busy at nights answering letters when a fellow gets mail in the trenches.I'll tell you it sure cheers him up a bit. I was over to see some boys from Elma last night. Young McDonald, the old Black Smith's son. Young ?Sareell?, young Rotherford from Selkirk was over this morning to see me. Well Elenora I must ring off for this time. Letter following later.I remain your affectionate admirer, Graham."

The one on the right has this from Great Uncle Freddie to my Grandmother, his sister Elenora: 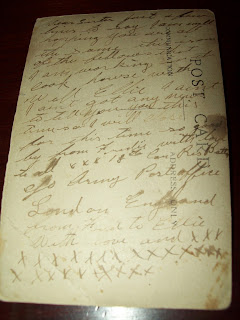 Interesting that his note was obviously started and stopped several times.