Hello. Good to be back blogging again after a disastrous autumn computer wise. A couple of hard drive crashes and a failed android battery left me stymied. So I settled into painting more.
This time I thought I'd make a departure from the plastic realm and show a 100 piece army I purchased from John Holt of Warrior Miniatures:


He has many 25mm figure ranges and features 100 piece army deals.
I've been a customer over the past 25 years, so I settled on trying some figures that I haven't tried before.
He has in his line some medieval sets under the "Crusade Miniatures" line.
here's the link:


I ordered the Polish army. 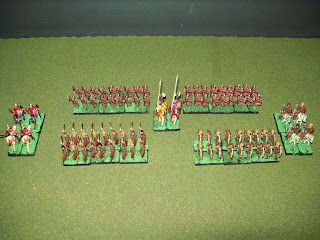 ﻿
This is the army I painted. They are nice figures, crisp and clean and feature a nice degree of detail. I base coated the infantry with a brick red and painted them in earth colours. The cavalry I base coated in white. Painted with acrylics and painted with "Miracle Dip", ie Minwax Tudor Stain for that shaded gloss look.
The army comes with a couple bags of accessories in the way of spears, lances and axes. In point of fact, the infantry have enough side arms to select pole axes or spears for the entire company.
Here are some more pix: 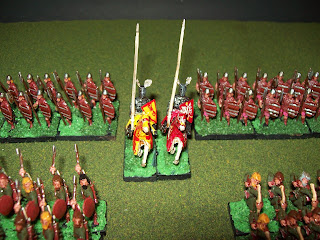 The knights are interesting, having winged helmets. IIRC Funcken has a picture of these sort of knights in his books:
http://dev.artvalue.com/image.aspx?PHOTO_ID=2657085&width=500&height=500


One quibble. The figures are cast in a nice hard metal that allows minimal adjusting. And by minimal I mean almost none. I dropped the red fellow and his wings snapped off. A quick repair with white glue and super glue did the trick.


The infantry are a nice lot: 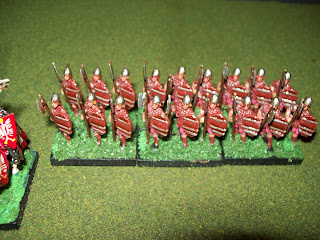 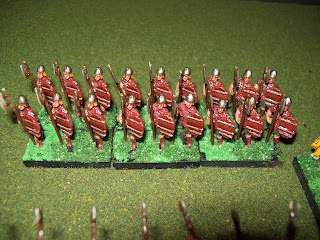 I used the pole axes, but I had enough spears as well. I think they'd look fine without a weapon as they have a sword and scabbard. Nice pose and detail, I think they could stand in for many different armies. 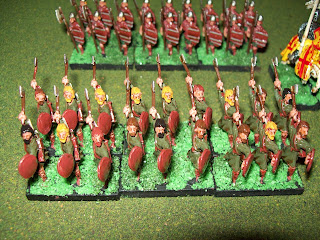 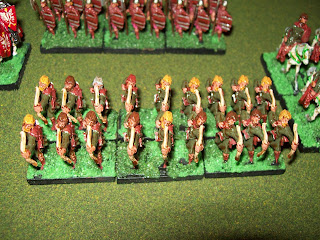 These two units are archers, one has axes and shields with their bow and quiver slung.
And now the cavalry: 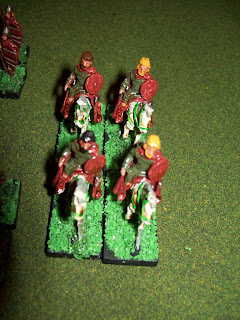 Listed as Kazak cavalry I left the spears off them as they tend to be a bit soft in my opinion. The figures are kitted out with axes and bows, so they aren't naked. Very useful types I think, from ancients to medieval. 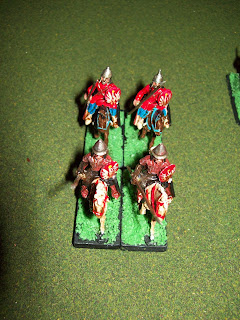 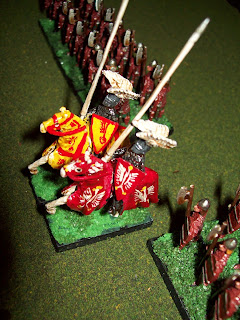 Dramatic looking, they certainly stick out from the drab looking infantry. 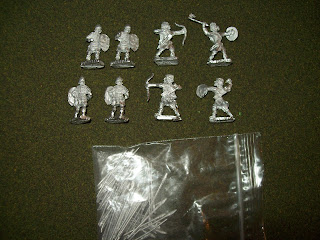 The remainder of the 100 piece army. I suppose I will mount them individually. As you can see I had one casualty in shipping. He might make a good flag bearer.
So what was the damage?
Not much.
Listed at 35 pounds, plus shipping to Canada it was a total of 50 quid, which worked out to 80 dollars Canadian.
I ordered in early January and John shipped within a day or two. Two weeks shipping and I was painting. I did a quick job on these guys, but I had fun, and they were easy to paint. The clean figures took acrylic paints like a dream. I liked the small rectangular bases that made fitting them on my wooden bases very easy, I didn't have to trim any.  So I can recommend these figures for anyone looking to put together a small force or a DBA style army. two or three of these sets would make an impressive wargame army.
In fact, I ordered another army (different era) in early February, and I received it yesterday.  I've already painted one unit and started another. I'll post soon. Perhaps I'll do "Warrior Miniatures Army of The Month"?
Posted by Doug at 8:56 AM