Memories Of Old and Those Yet To Be Remembered...

I finally took some pics of my old terrain. It was inspired by the pages of Miniature Wargames and consisted of 2 foot by 2 foot squares of styrofoam. I did the texture with a mix of green poster paint, plaster of paris and a now defunct product, green sawdust from Life Like railway products. 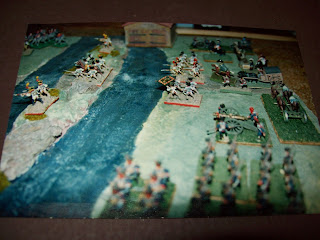 These pix weren't from a wargame, just a set up to take some photos with one of those little tourist cameras. The figures were a mix, some conversions and some 25mm Warrior Miniatures painted as Neapolitans. My raging river had an island and a bridge and was in an "L" shape. The roads were all measured from the center of the tile and were 2" wide, plaster of paris with brown poster paint, run over with suitable wheels. 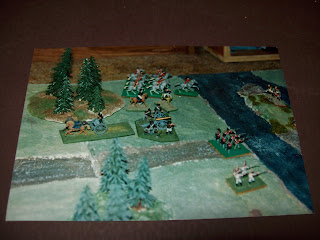 Back then I used to mount Airfix figures on cardboard, then later seal the open sides with masking tape. You can see that on the RHA battery. Later I tried plaster of paris or glue and sand. I never got the hang of it. That's why I just gave up and started with the wooden dominos. 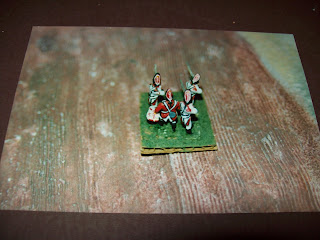 Washington's Army have joined the Spanish grenadiers. Looks like a new crop is coming in on that combed farm field. 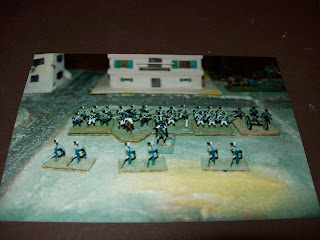 My Portuguese guarding the crossroads. I guess the cazadores failed to show up this time. I miss my old terrain, but it sure took up a lot of space. Looking back has made me nostalgic and I am currently abusing a 5 foot by 5 foot section of cardboard with glue, tape and beach sand.

Well then, onto new items.

I have noticed a change in the offerings from the Chinese and the dollar store armies. To whit: 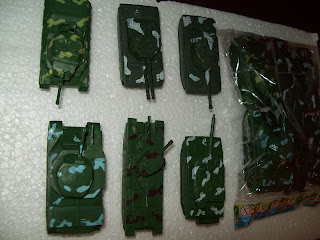 New tanks. Of note are the two WW2 tanks, a Lee/Grant and what appears to be a Russian T35! 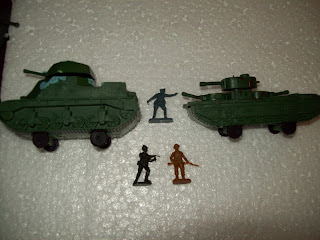 The scaling is awful, the T35 is diminutive, and the Lee is a bit too big. However, beggars and chosers...
The Lee I think is based on the British version, the Grant as it has a large turret. If one spent the time you might get a decent model to mix in with other tanks. The soldiers are Airfix, and Esci for scale.
The T35 is just too small, but it certainly is useable as a fantasy war tank. The new way of mounting the wheels and axles is annoying, necessitating some surgery to get those treads in the mud.
Other models are faintly recognizable, having turrets, short guns and the same hull.

Other items of late are trucks: 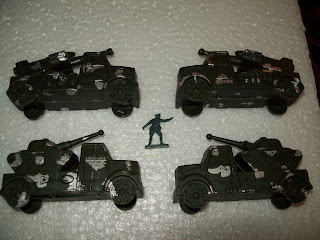 I like these. They are big and clunky, but look at the tank transporter! I had a go at this one with my XActo razor saw and it comes apart quite nicely. I removed the tank and its tiny size reduces it to the pre war variety, perhaps an Italian or Japanese two man tank. I removed the huge gun and made a field gun out of it on an Airfix French Napoleonic gun carriage. I haven't had a go at the oversize guns, but with some camo netting they might make decent heavy artillery. The wheels are of interest though, they look like all metal wheels from WW1 or from an anti tank gun. Sadly, they don't turn and are moulded onto the truck, so surgery would destroy the truck to save the wheels. 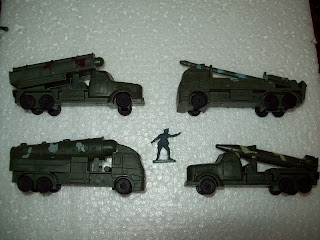 The next batch are a return to tiny scales. Long trucks with two cabs. One a modern streamlined version, and the next a long nosed version that would do for WW2! But a lot of cutting to get rid of the nuclear missiles and?railguns? on the back. 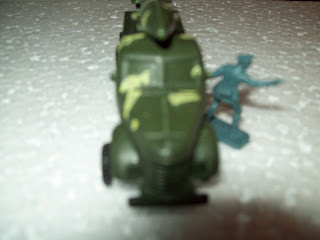 A blurry shot of the grill. Smallish, but useable with a bit of paint and imagination.