This is a departure for me.
My blog has been largely 1/72 or 20 odd millimeter high plastics, with some meanderings into comic book toys and the occasional lead soldier.
These are very large 60mm plus Chialu figures.
Chialu was an Italian company, and the figures are composite, that is, they are made of a mix of plaster, resin, glue and other items, on a skeleton of bendable wire. They are much like the German Lineol toys.
This lot (about half of what I have) are meant to represent the armies of the Risorgimento, or the Italian Wars of Unification of the late 1850's onward.
These figures are quite fragile, but holding a complete figure you wouldn't think so. They are light, but they feel sturdy and they look great with their bright paint.
As you can see, these guys are quite dusty. I haven't had them out in about 25 years.
The story of how I got them is an interesting one, at least to me anyway.
Back in the 90's I was going to the flea markets and antique shows.
I saw a little man with a tin of these figures.
I had to have them. They were remarkably cheap, less than $20 for a dozen or more.
I bought all he had.
I managed to get his name and gave him my name and number and told him to call me if he ever got his hands on more.
(As I said, he was an odd little man. There was something off about him. At the first antique show, I bought all he had, and then put them in the car. I went back in and he had more. I bought them. and we repeated this a couple times more. Very odd and frustrating. He also didn't know anything about the toy soldiers he was selling.)
Well later in the summer I got a call. So I went to his apartment and bought the rest.
The wierd thing was that I could hear two women whispering about my buying them in the next room, but they never came out. They thought it was hillarious that I was buying these toys. I was uncomfortable, but I wanted the figures regardless. I impressed on the guy to call me again if he ever had more. The hidden women laughed and I heard them say "He's asking him out!"
Very odd bunch.
Well I knew where I had seen these figures before.
As a kid, we lived in the country and every Christmas we did a big shopping trip to a local shopping mall in the City, and one thing I loved was a musical display case, with all kinds of painted toy soldiers going around and around. There were several layers.
Battle scenes with knights, the parade in Rome of the Pope and his guards, and these soldiers who as a kid, I thought were refighting the Battle of Waterloo.
Eventually this display disappeared, and I forgot them. But these figures I was buying were from the display. The women (one of whom I found out was the owner's daughter) had used a screwdriver to pry the figures from the display and many of the figures are damaged by that boorish thuggery.
The real irony was that I had known the creator of the display and the original owner of the soldiers, but we had never talked toy soldiers.
He was Italian, and he owned a little bike store downtown. I used to go there as a young adult and buy parts and tools. He was a nice guy. He had passed away and his daughter had torn apart the display to sell the soldiers for a few bucks.
So here are the figures. Forgive the dust, I gave them a light brushing, but I need a soft brush from Michaels to do it right.
These guys are the Garabaldini, the Red Shirts. I didn't get a Garibaldi figure, but I did get a few boats made of fabric tape. I suppose this was the Thousand who crossed the Straits of Messina to invade Sicily. 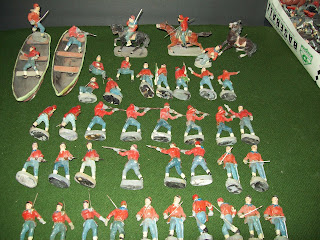 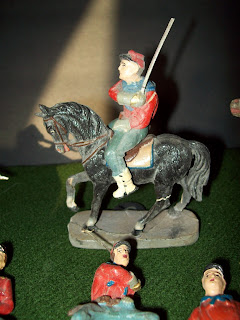 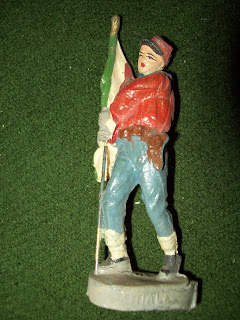 These are Neapolitan soldiers: 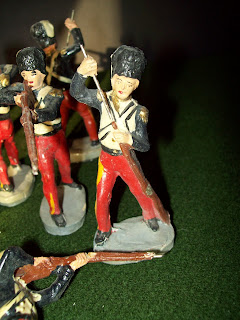 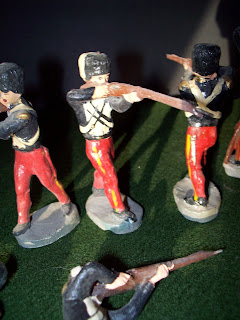 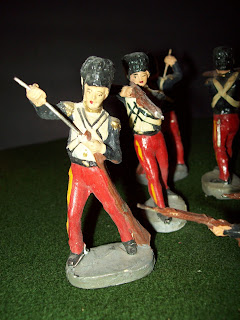 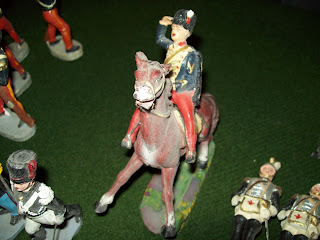 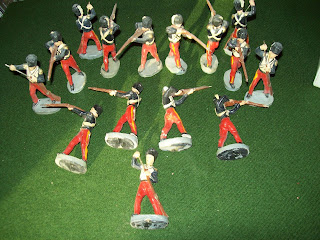 I think these are my favorites.
The next are Cuirassiers: 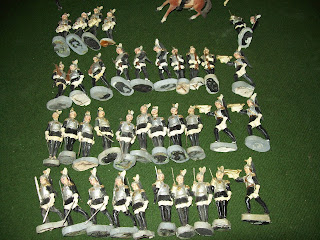 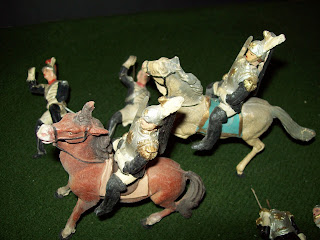 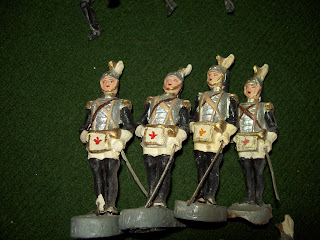 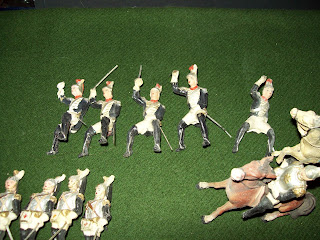 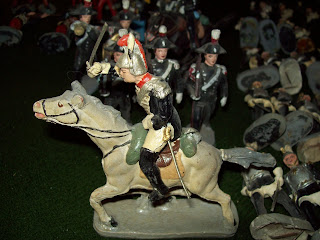 You can really see the damage done to the bases. Many of the horses have damaged legs as they were snapped off the display.
Carabinieri: 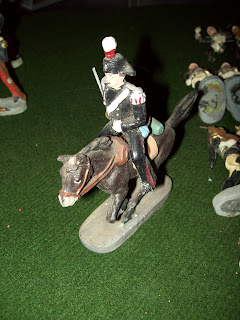 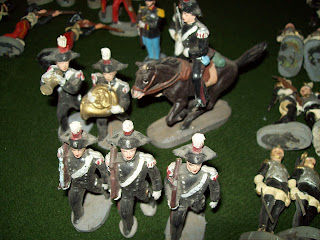 These are a couple of close ups. The horses were remarkable, even the hair was carved into the figures. The two odd men out are from another couple sets I didn't get. As I said, the odd little man didn't know anything about toy soldiers. I have no idea why the women had him as their front man, or indeed why they would have needed one, as he was either mentally challenged or completely vapid and high. It made me wonder if the figures were stolen, but someone from the antique show circuit filled me in. The bike store owner and the daughter never got along, she was "alternative" in her lifestyle and he was old school Italian. After his death, she cleaned out his house and store and tried to open an antique store that quickly failed. Apparently only one other person bought figures from the little wierdo, and he was the owner of a local furniture concern. We have never met to buy one another out and complete the collection. 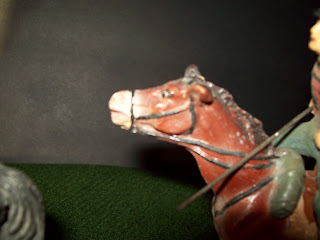 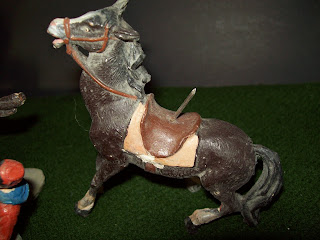 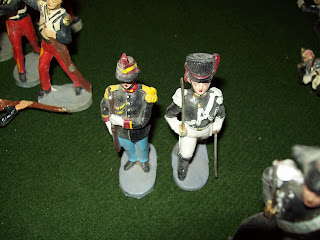 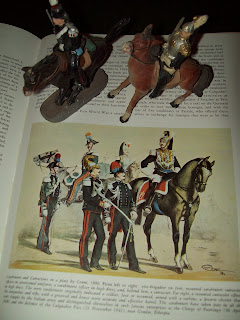 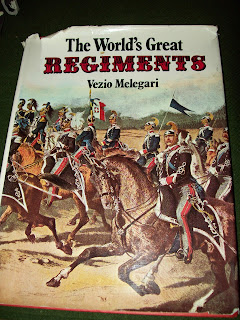 One of my favorite coffee table books, Melegari's "World's Great Regiments".
Anyway, I hope you enjoyed a look at some unusual figures and letting me walk down memory lane. A strange and unusual lane indeed.
I'll post again with the medieval bunch.
Posted by Doug at 12:31 PM