This is a follow up on the comic book soldier theme I did with the Lucky Romans a while back. This is for the later fully round plastic figures, not the earlier flat figures.

We're all familiar with the comic book ad: 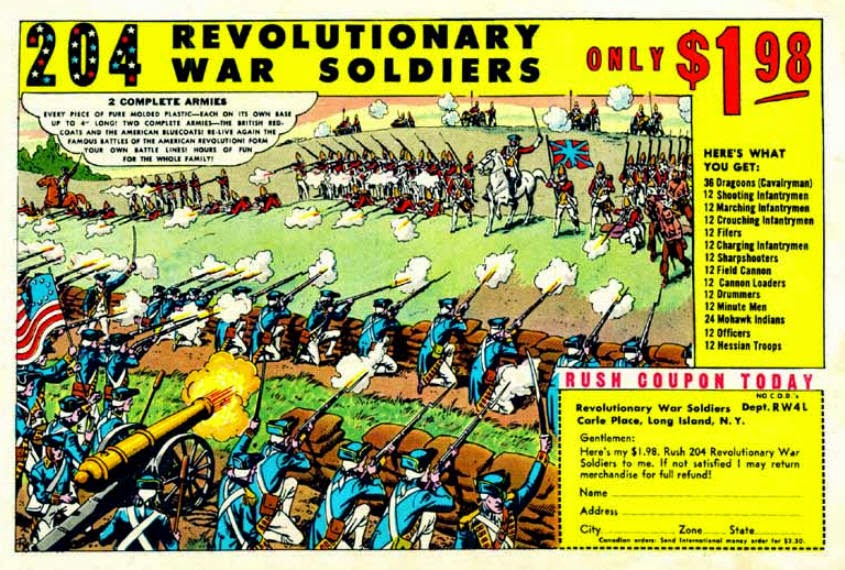 As a kid the "No Canadian or foreign orders accepted!" never stopped me from trying to order, but alas, the letters were always returned.
As an adult I began to find them at flea markets, often for a few dollars. Then with the internet I began buying sets and partial sets from comic book stores.
But ebay was the eye opener. For a while the toys were relatively cheap, but then their prices began to climb rapidly.
Now I occasionally buy a set in the $30 range, but I've seen some auctions realize several hundred dollars a set.


Here are the original contents:

They were:
36 Dragoons (Cavalrymen) 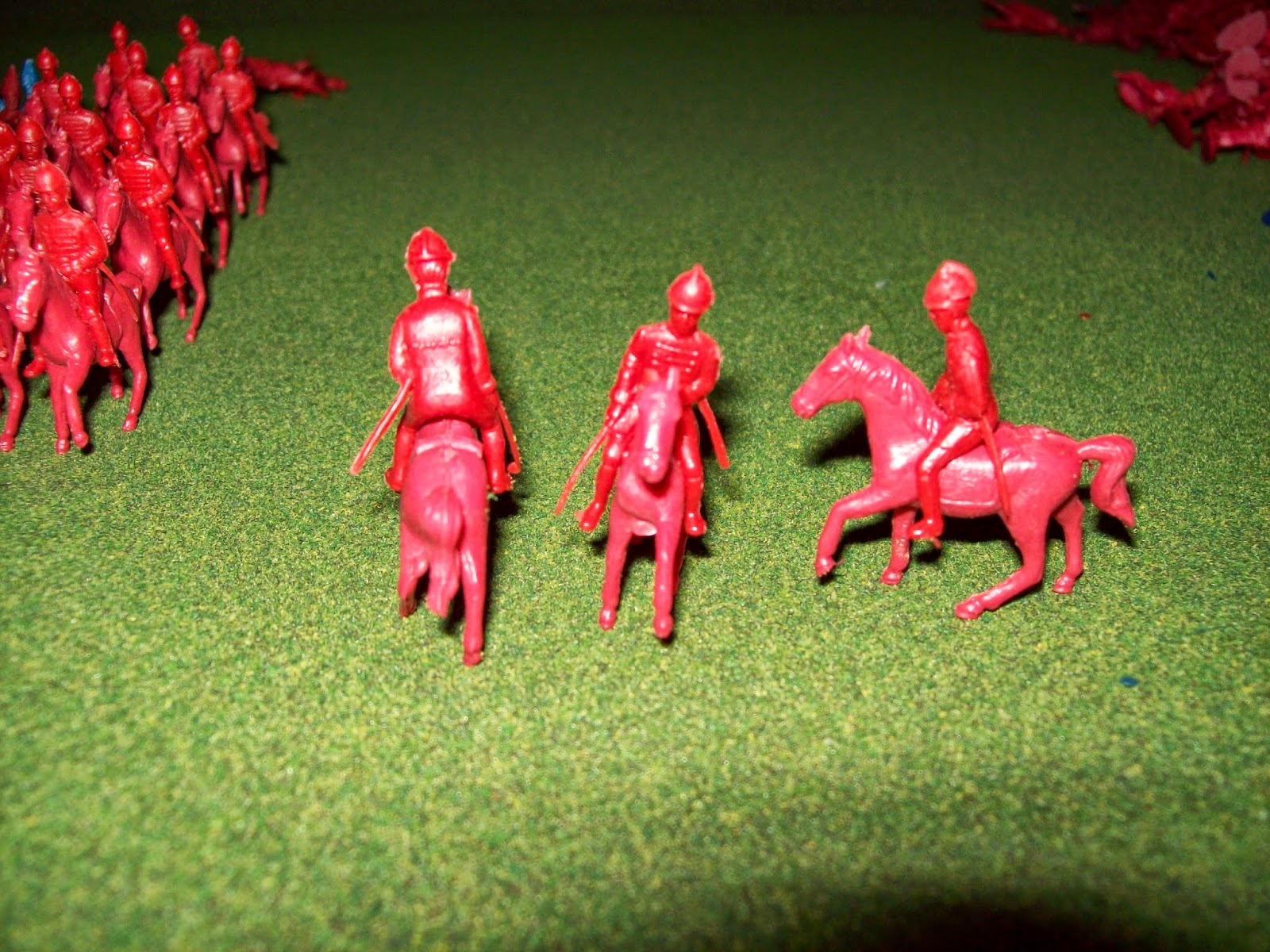 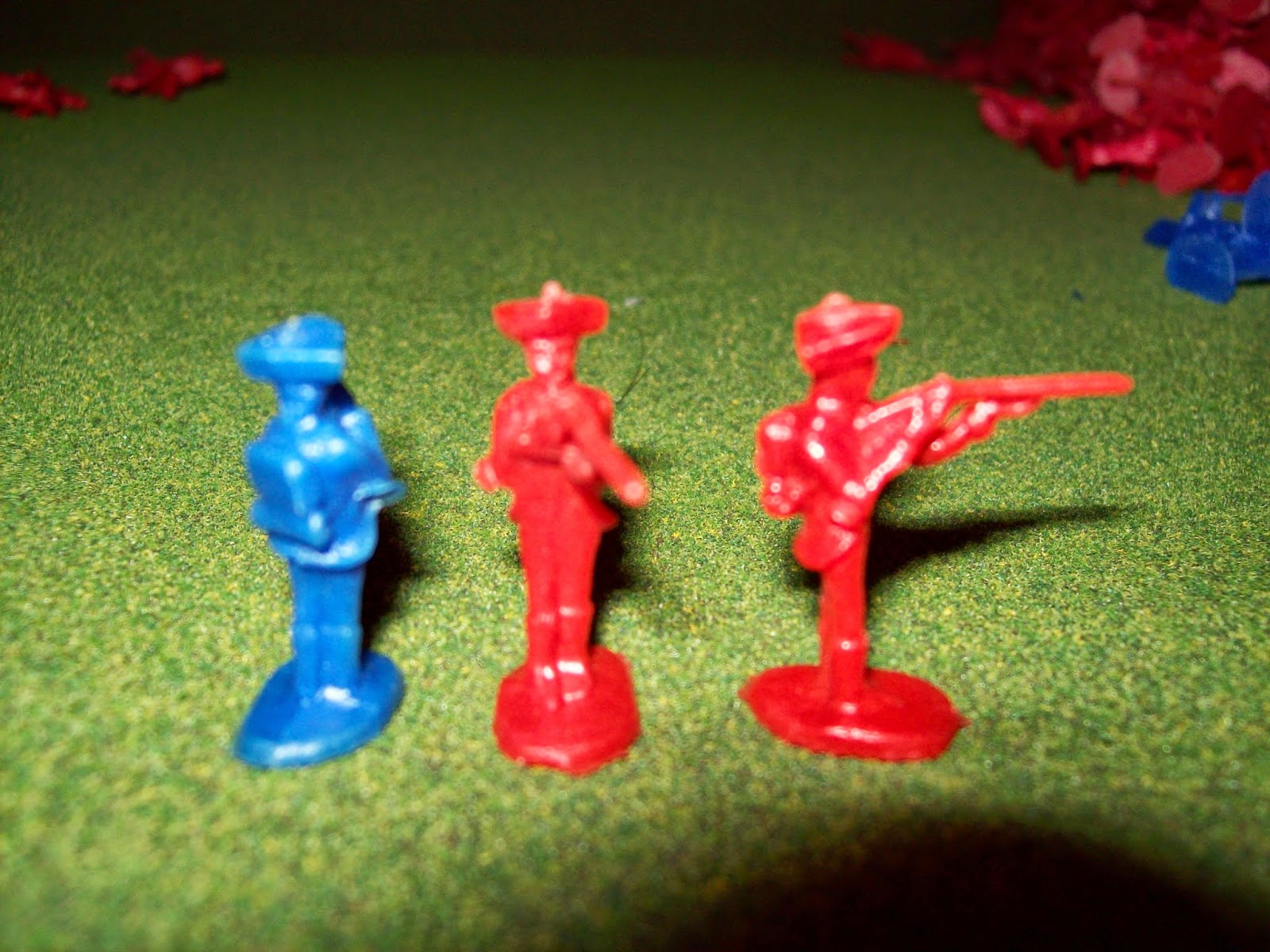 (Note: I'm not sure what figures were specified by some of the descriptions. There are 3 shooting figures, one standing, one crouching, and one kneeling.) 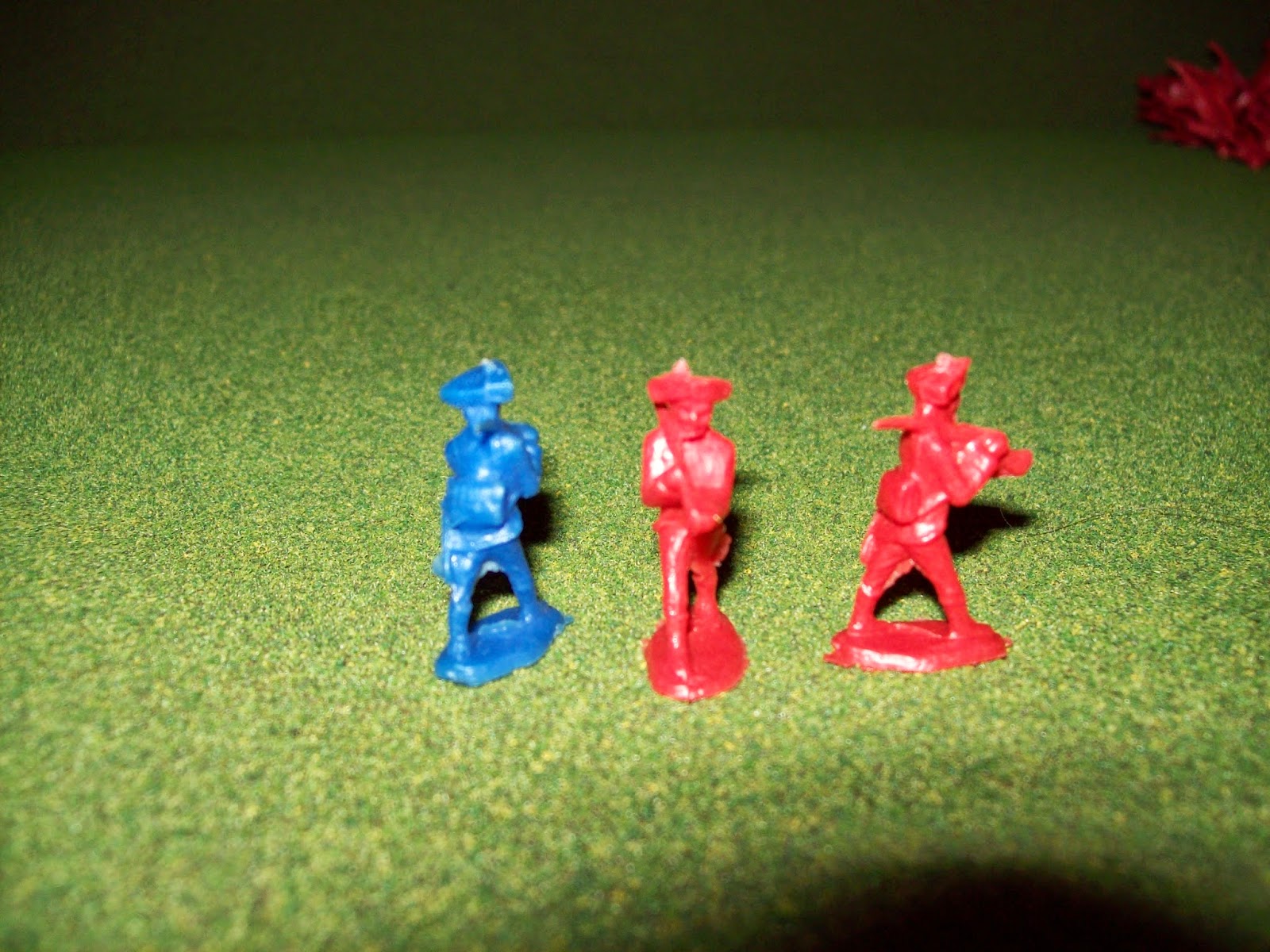 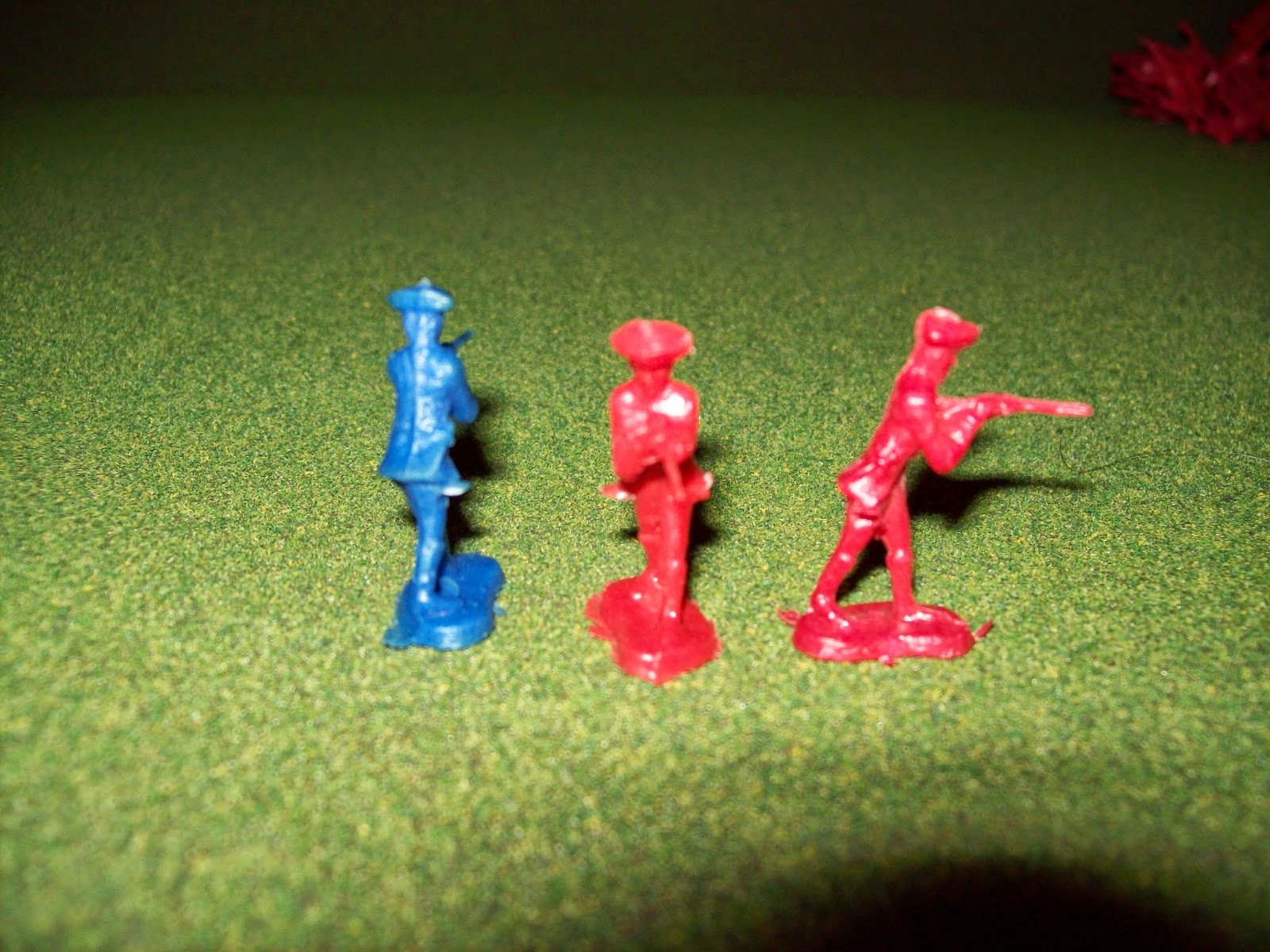 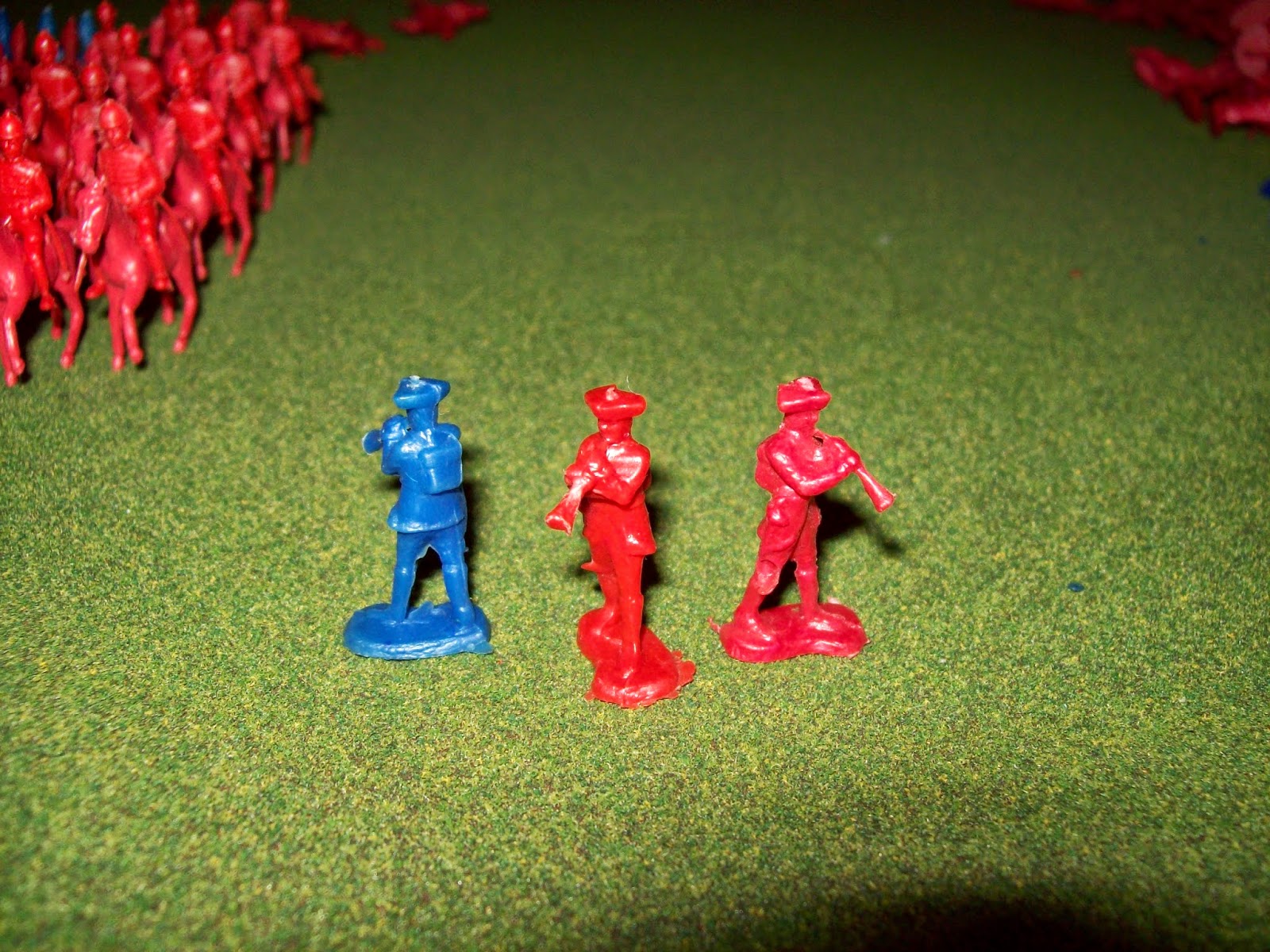 (Note: The figures depicted don't have a small fife in the traditional sense, rather it looks like a horn or oboe of some type.) 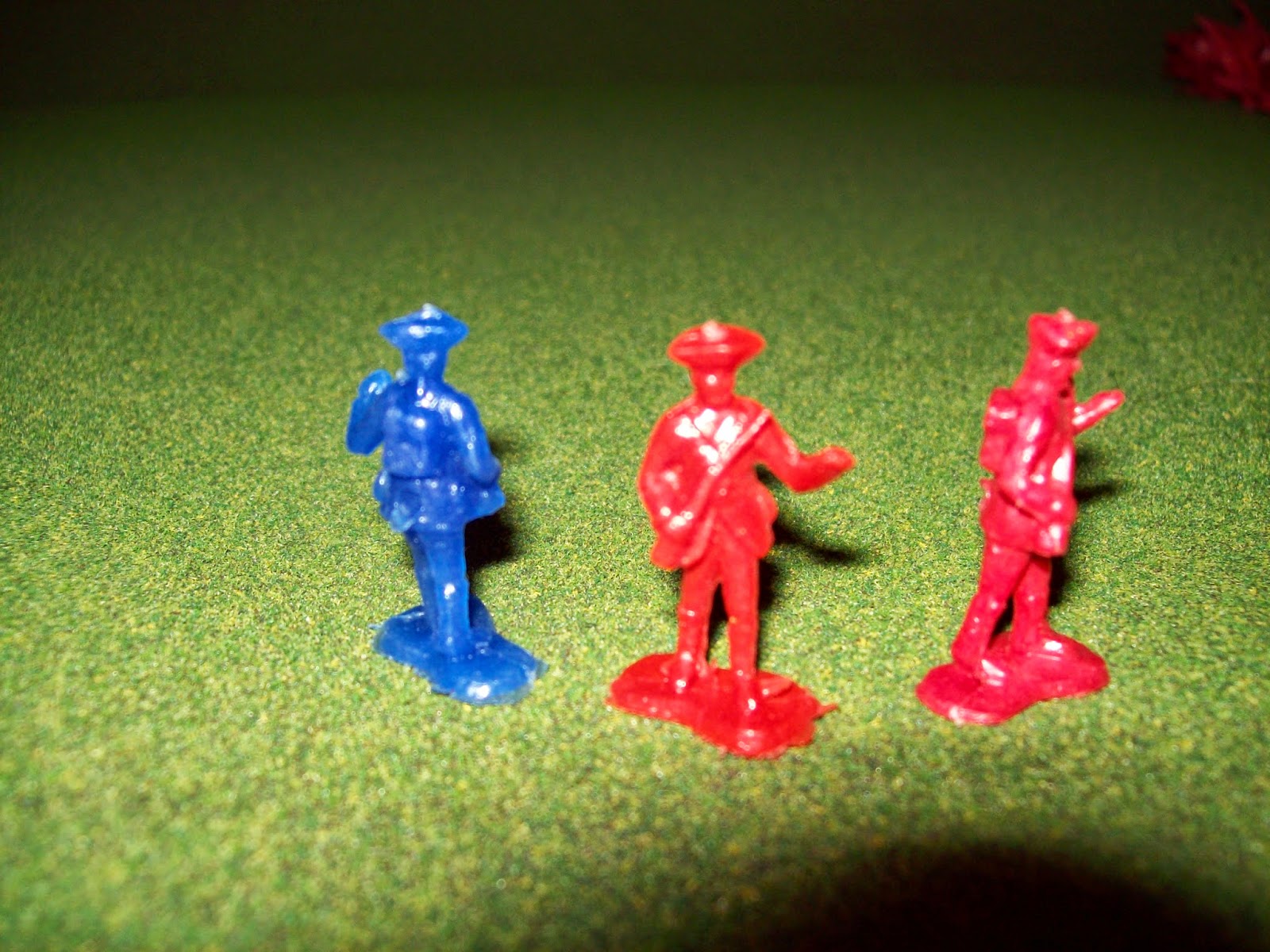 (Note: None of the figures are very active and I have no idea which one could be seen as charging.) 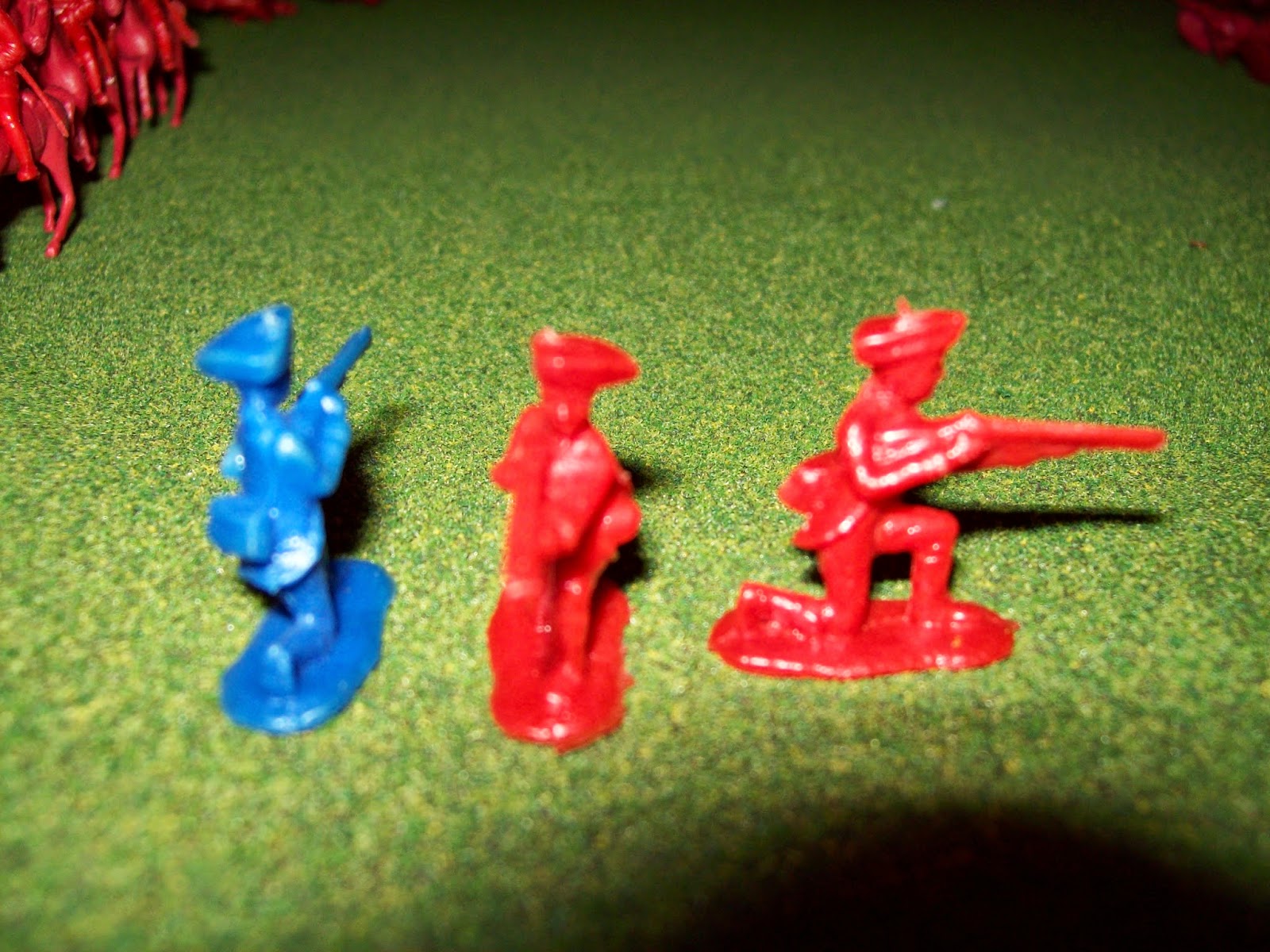 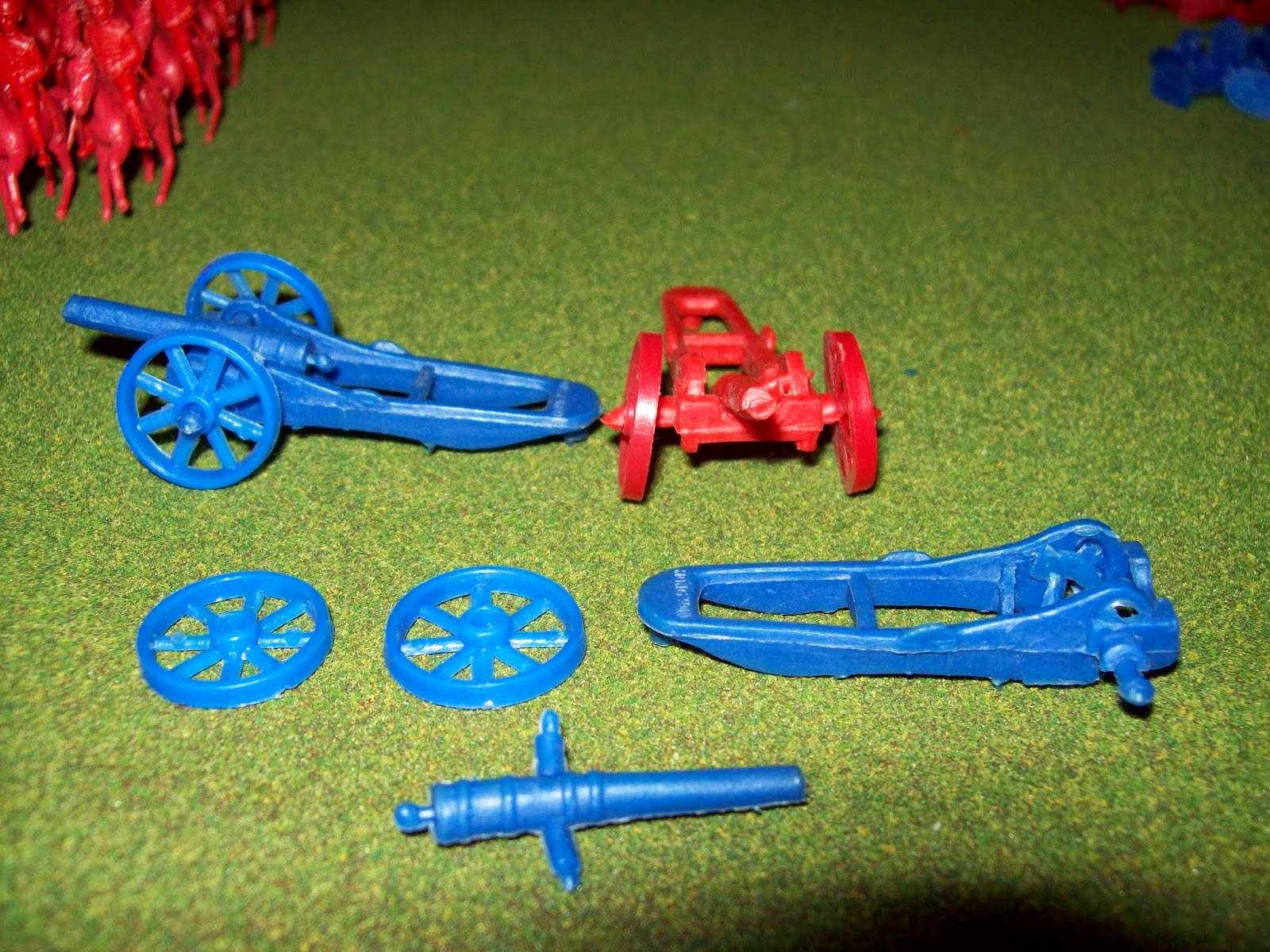 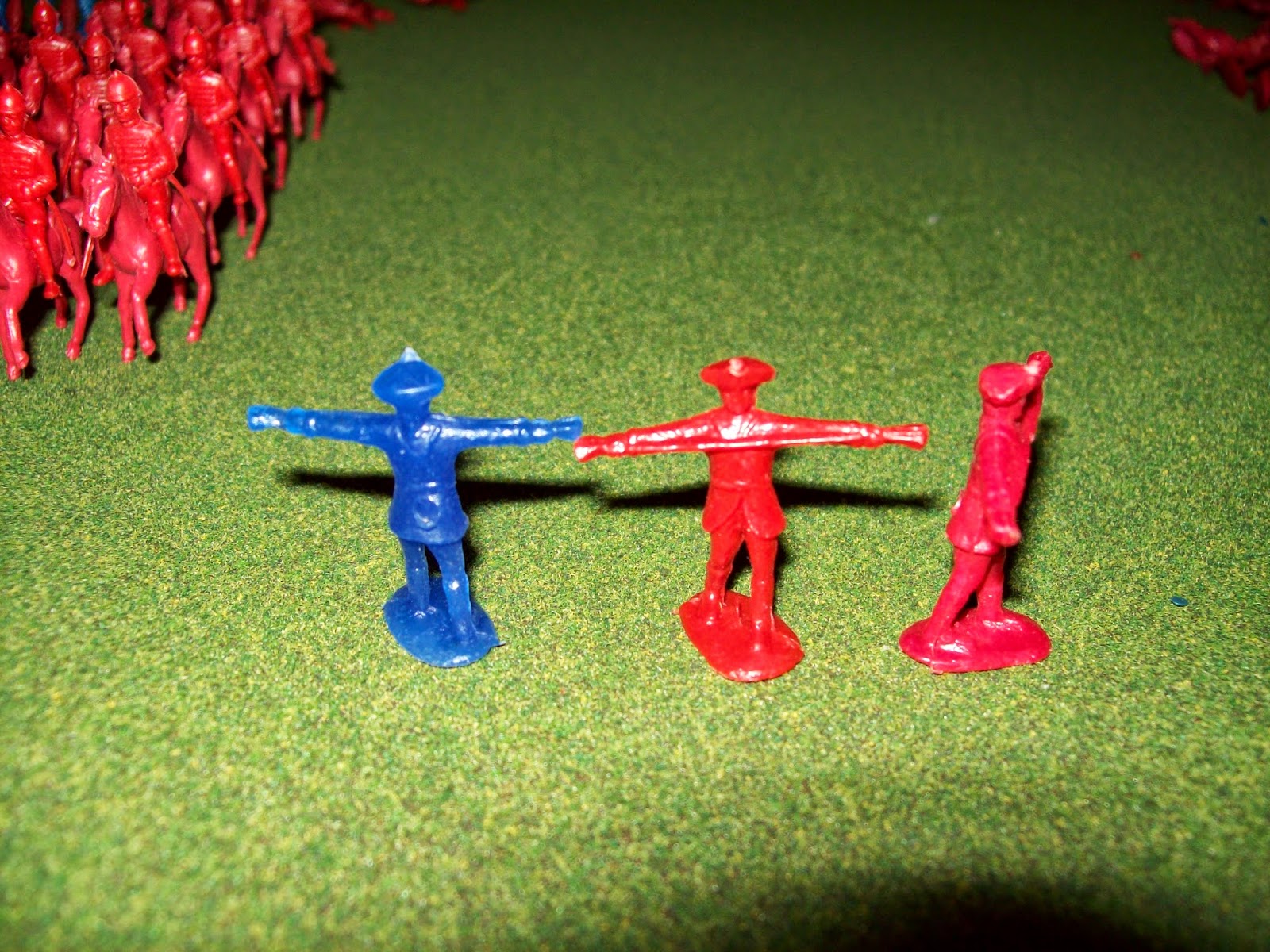 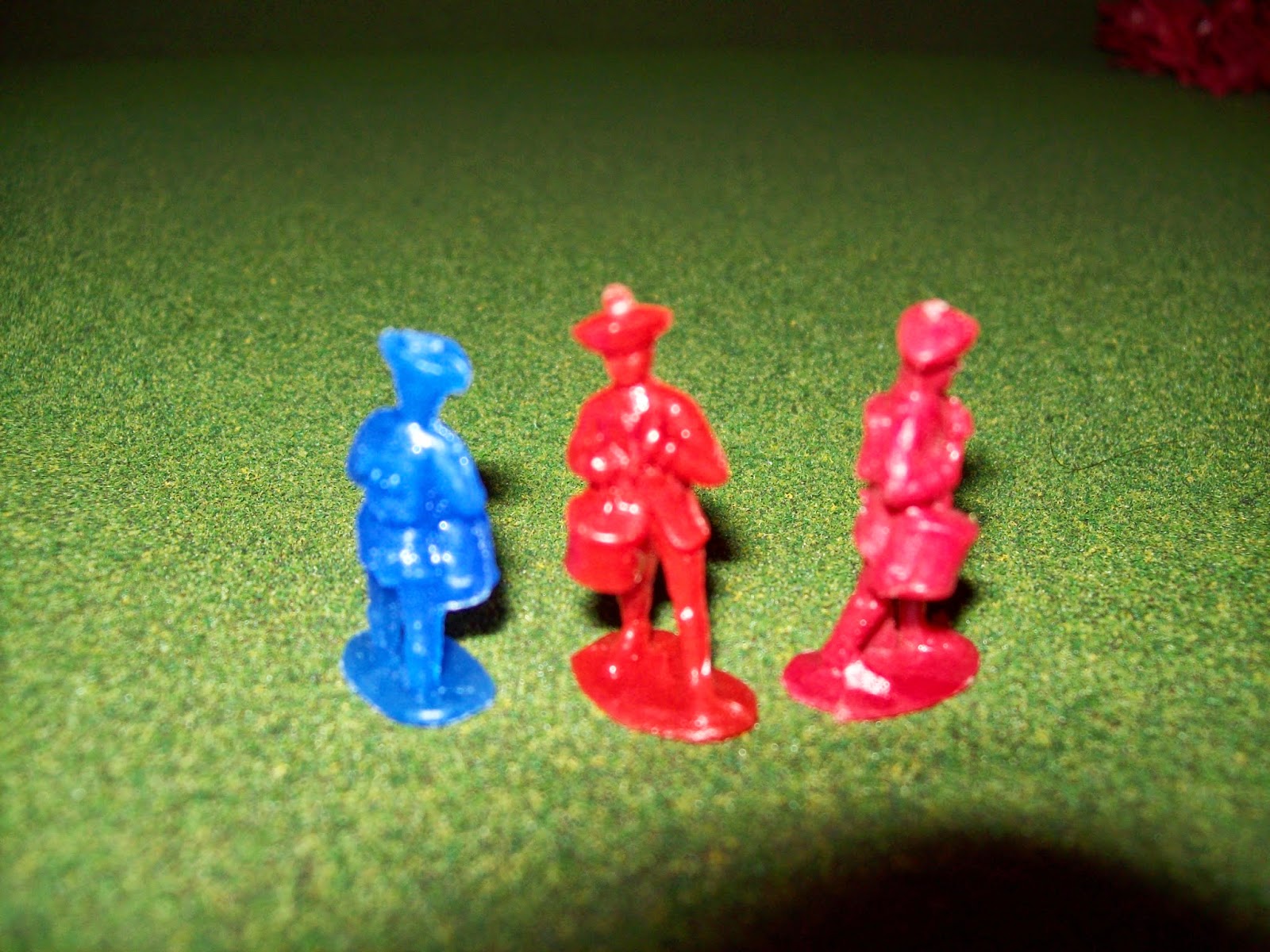 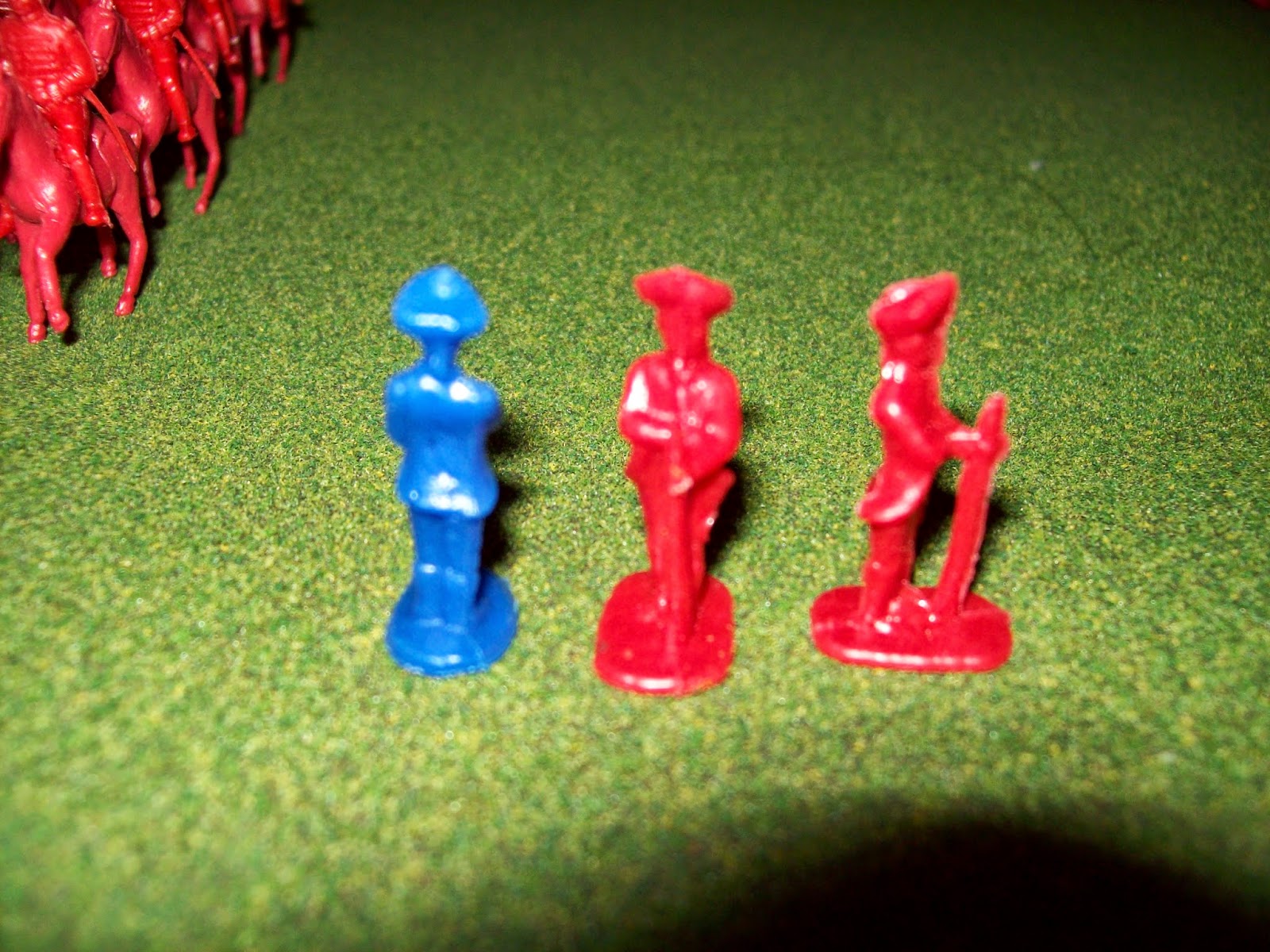 (Note: Along with the Hessians, these figures are strictly meant for one side only. In this case, Blue American Militia. However, both the Militiamen and Hessians feature figures in both colours. However, there are relatively few red militia and blue Hessians, at a ratio of 30 to 1 in my collection of 10 or so sets. It could be that these odd coloured troops were mistakes or were added in later sets? Frankly I don't know.) 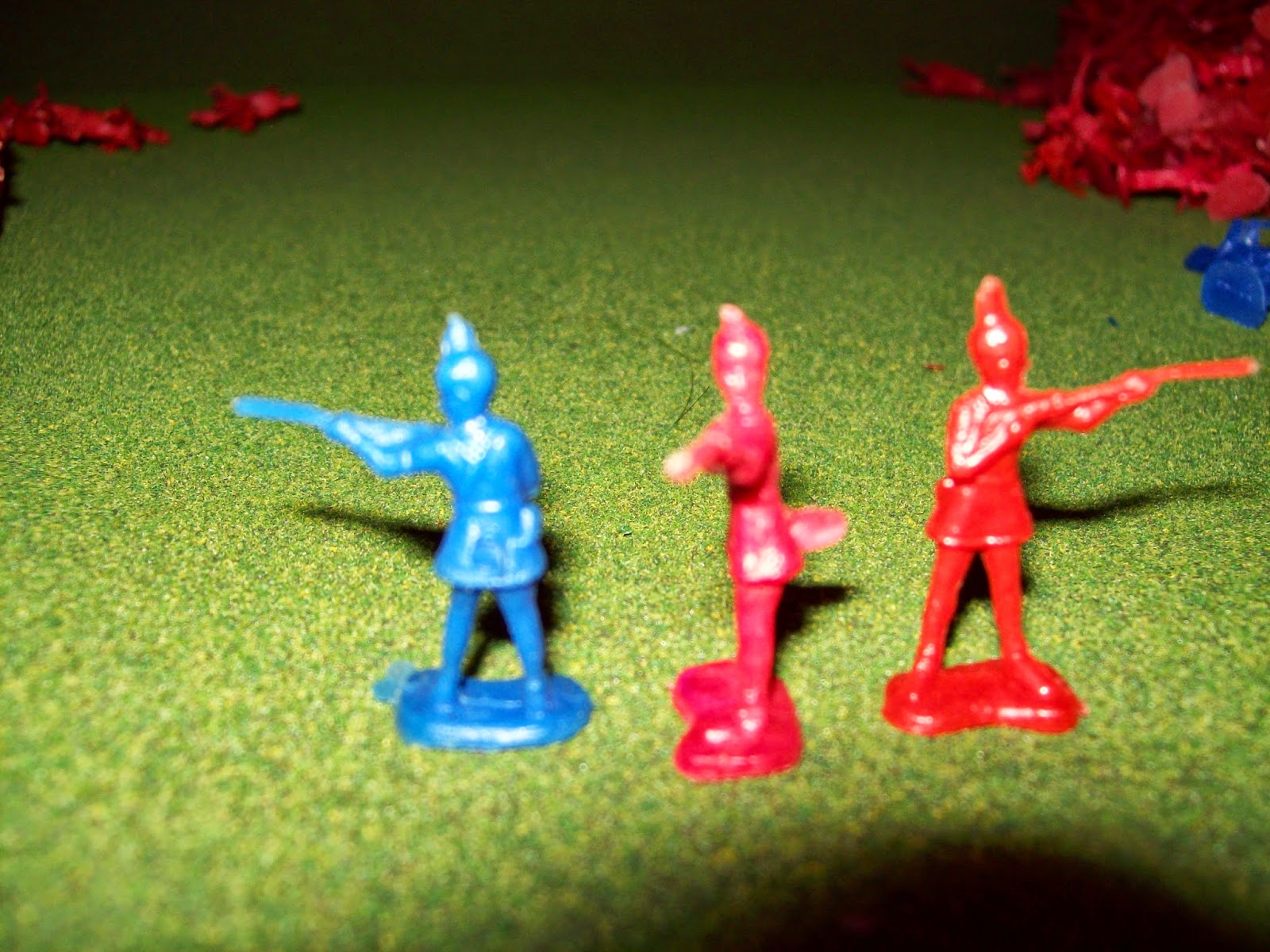 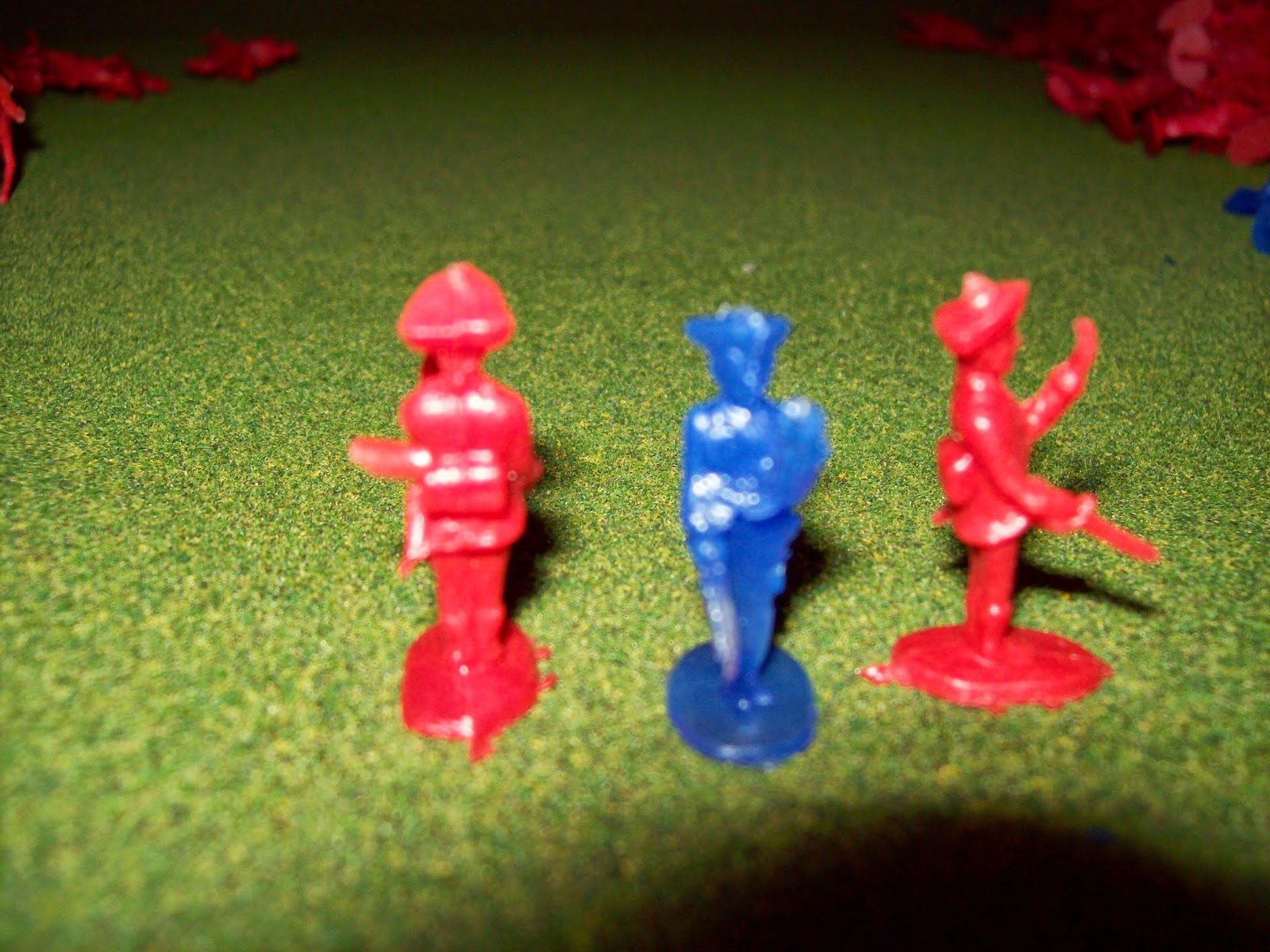 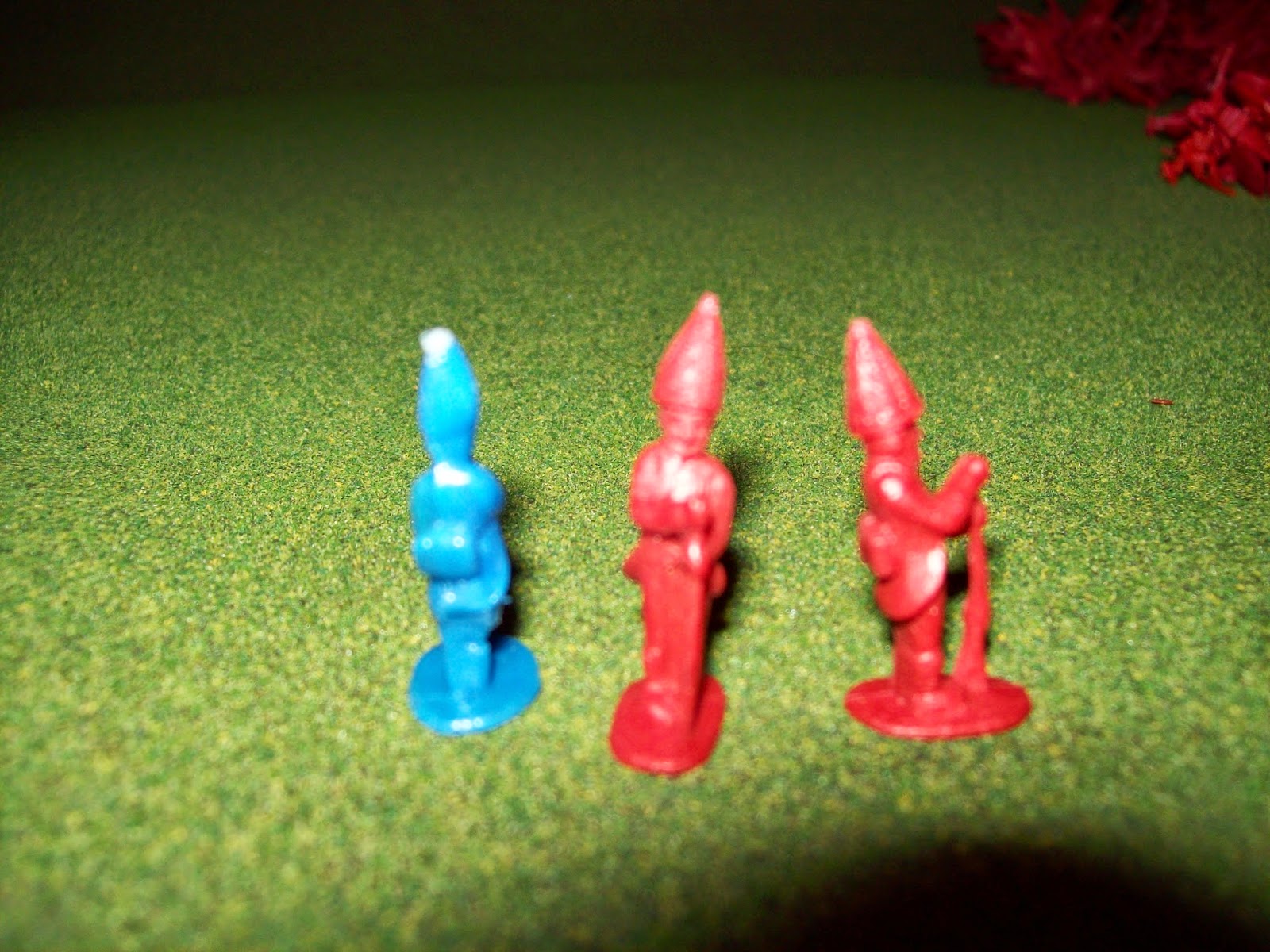 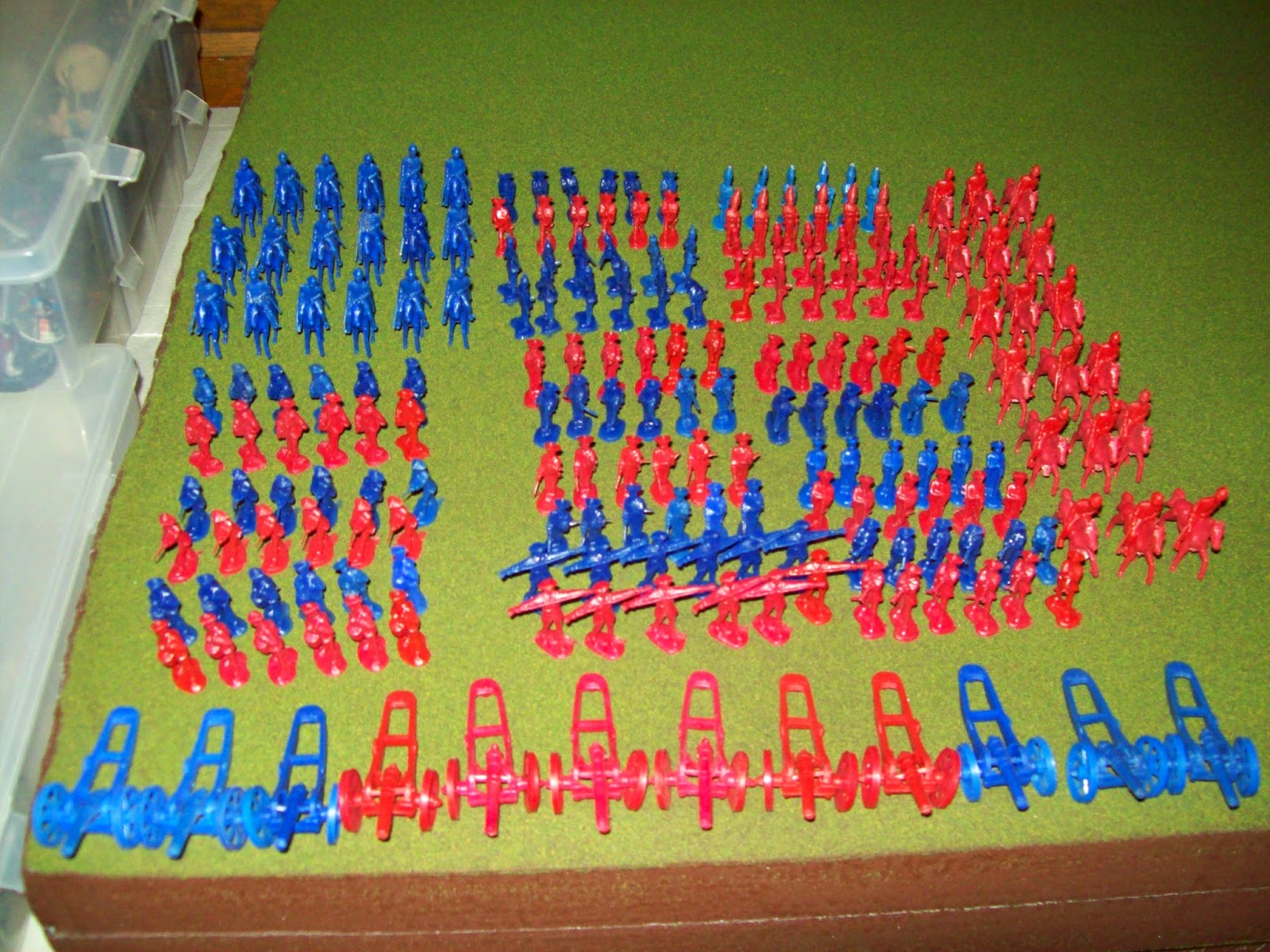 There were many variations in the two colours. Whether this is a result of sun fading, age or variations in plastic I'm not sure. 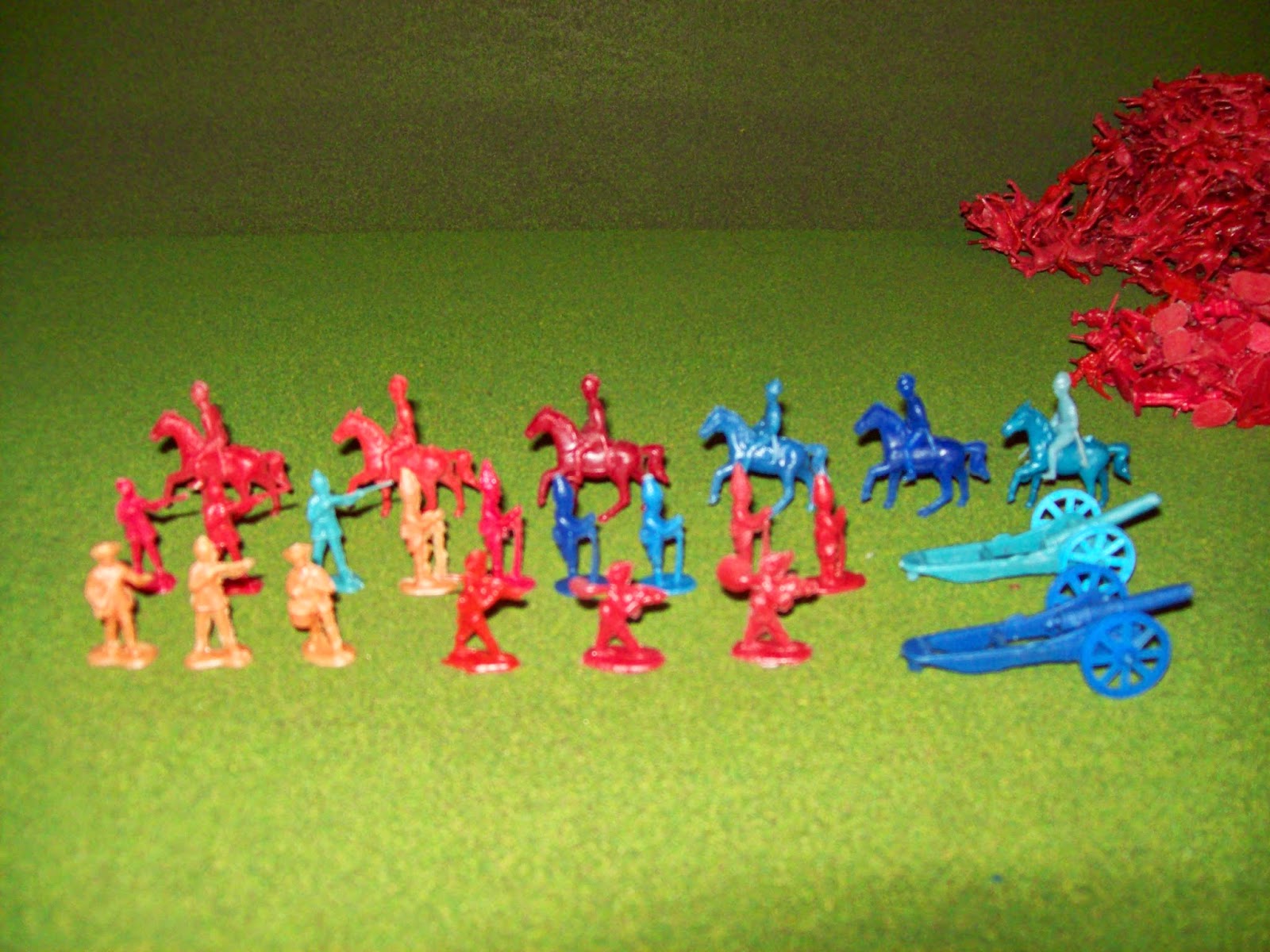 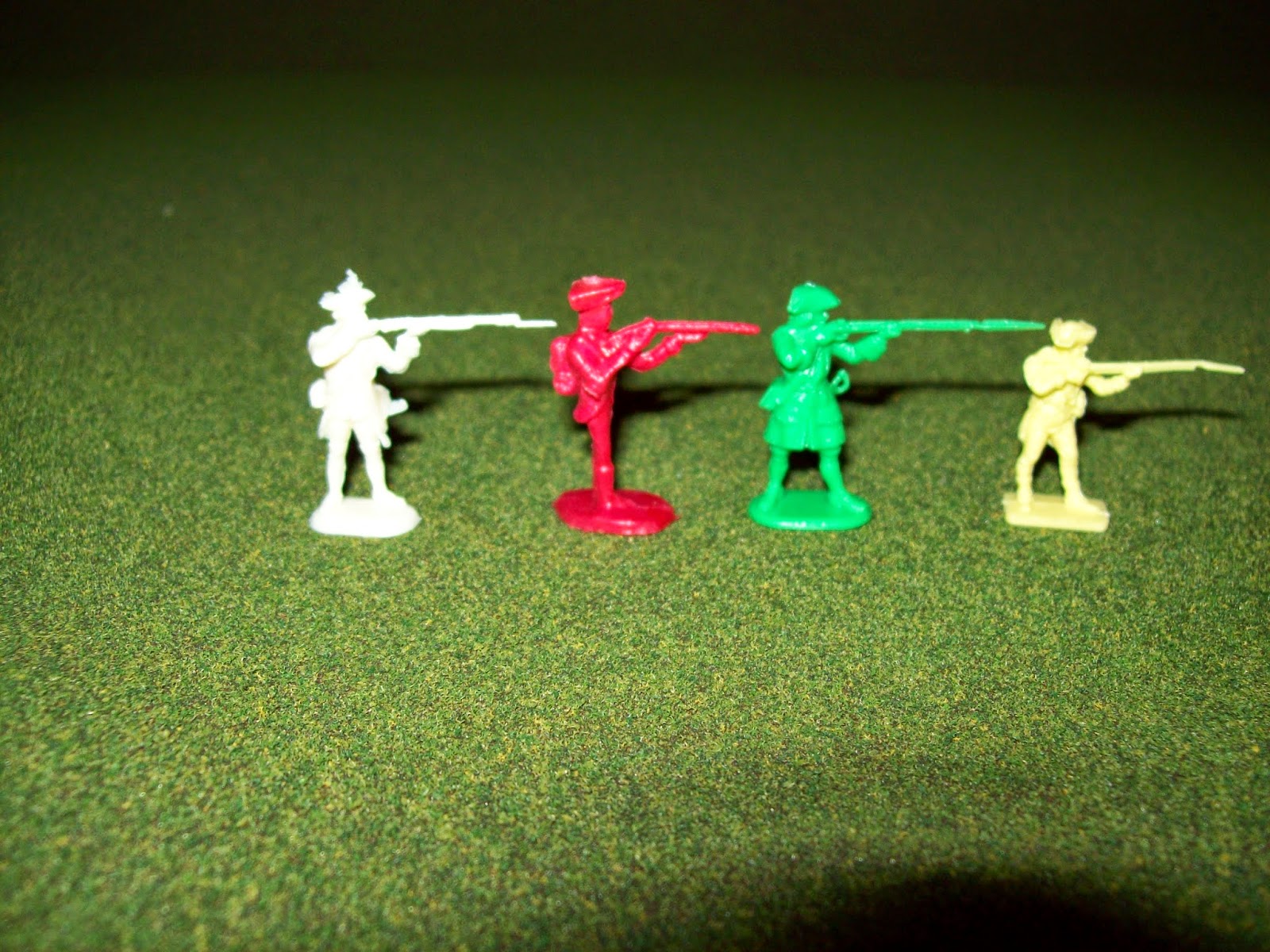 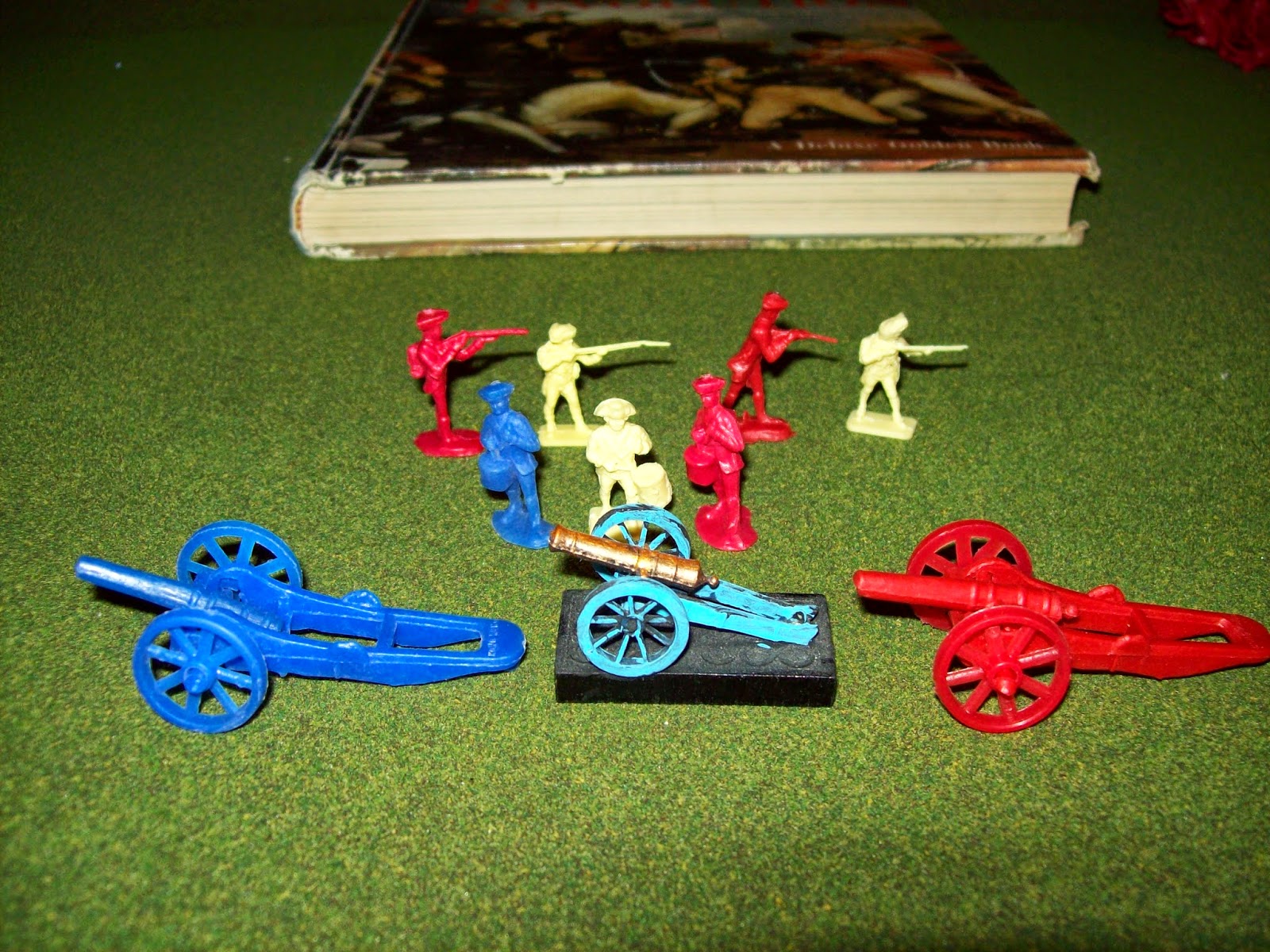 One observation I've had is that these figures have resisted the plastic rot that many old Airfix figures have experienced. They remain bendable and hold their shape.


Now these figures were a little odd compared to Airfix figures, but they conveyed the expected general appearance of Revolutionary War Soldiers. The dragoons have the boiled leather helmets, albeit with minimal detail. The tricornes are fine, but the Hessians/Grenadiers sport rather fanciful mitres. Reminicent of the old Bee Hive Honey logo, they did stretch the imagination.


The Indians were a little disapointing at first, One would have expected the feathered Iroquois of children's books or hollywood. Or at least the ones from the ad. But in reality, the general costume is rather apt when compared to contemporary art. 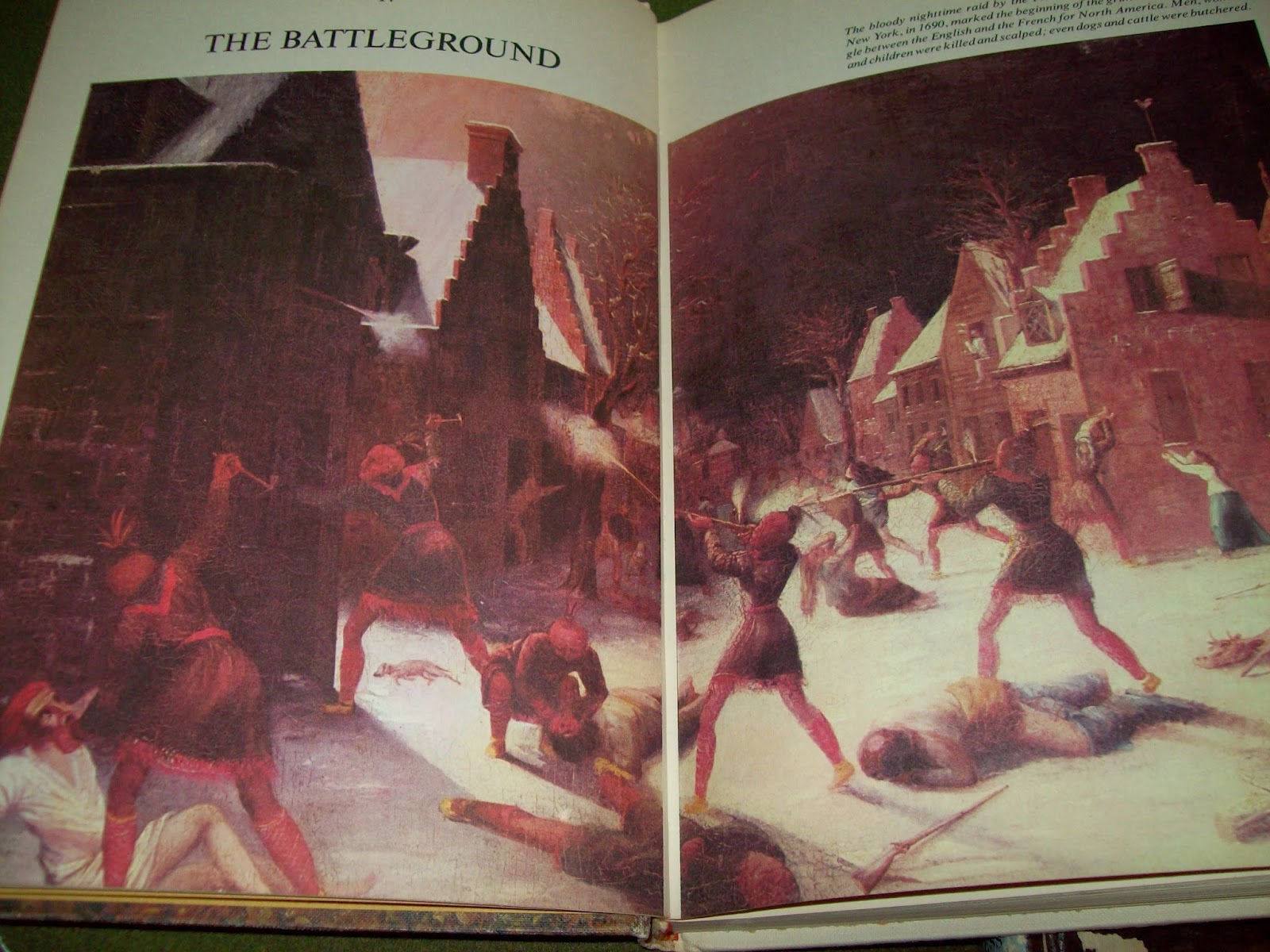 In point of fact, the posing and sculpting of the soldiers closely resemble the depictions seen on artwork and posters made early in the revolution.
Here are a few pictures of some early depictions of the war by artist Amos Doolittle: 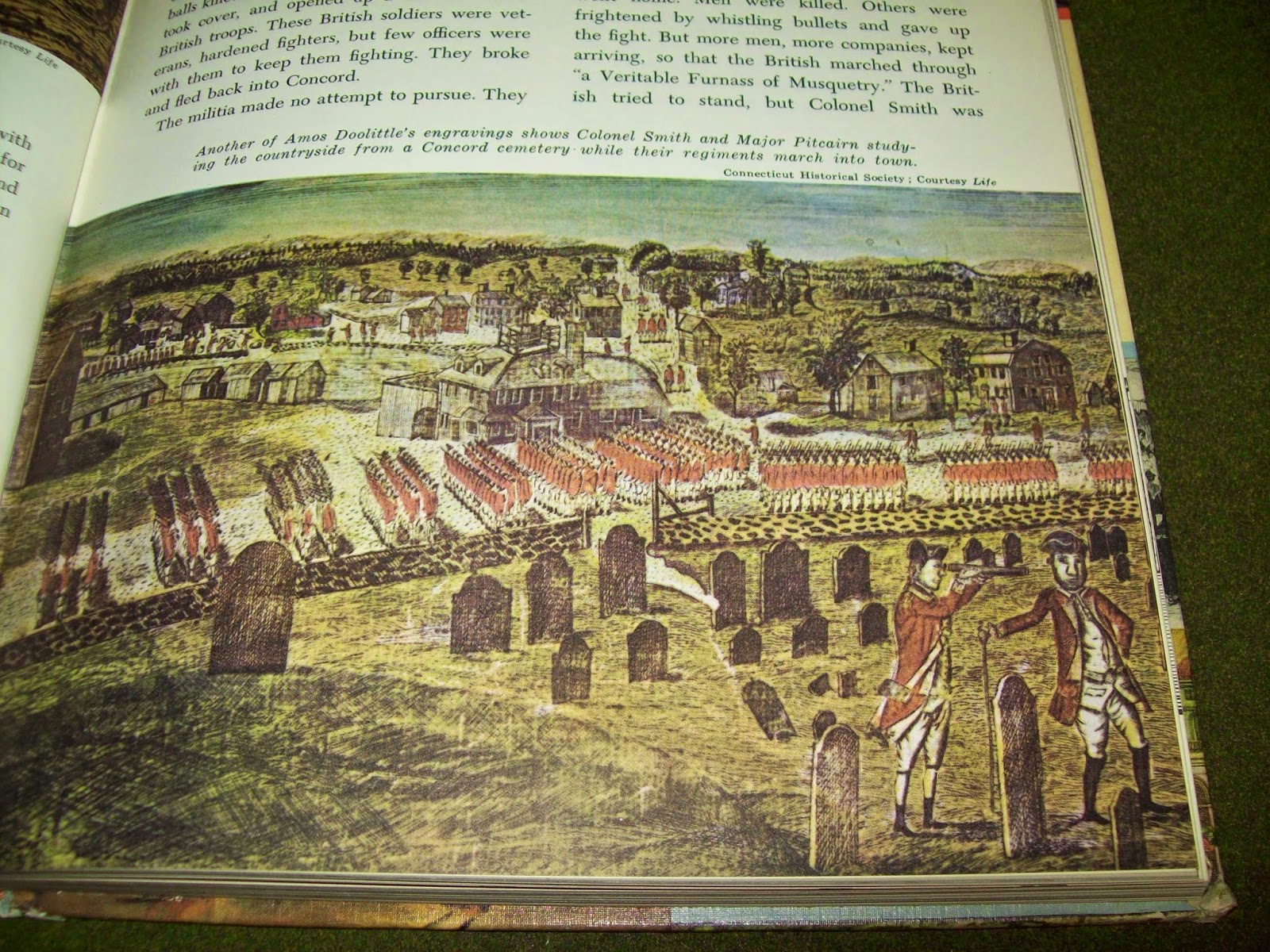 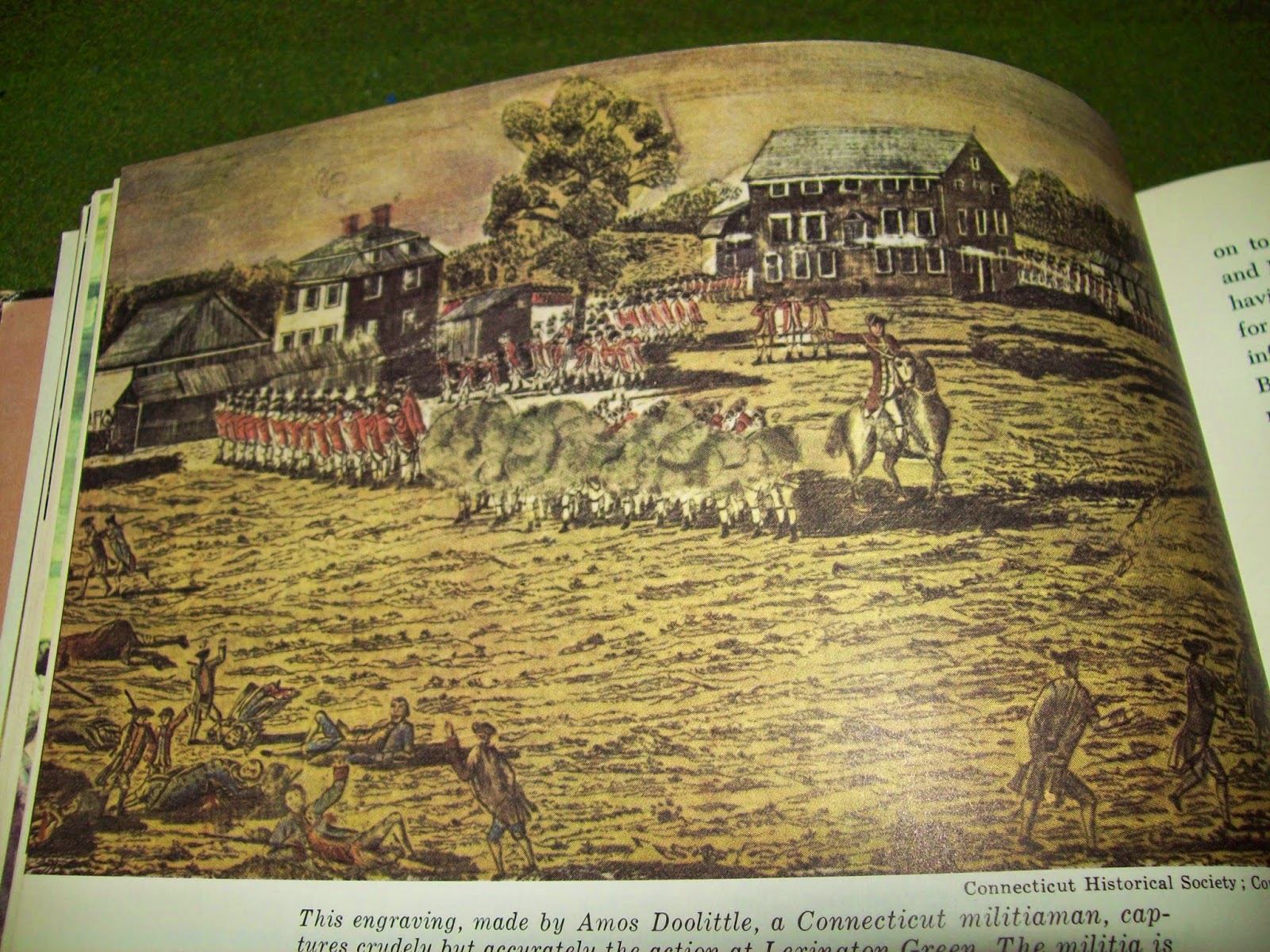 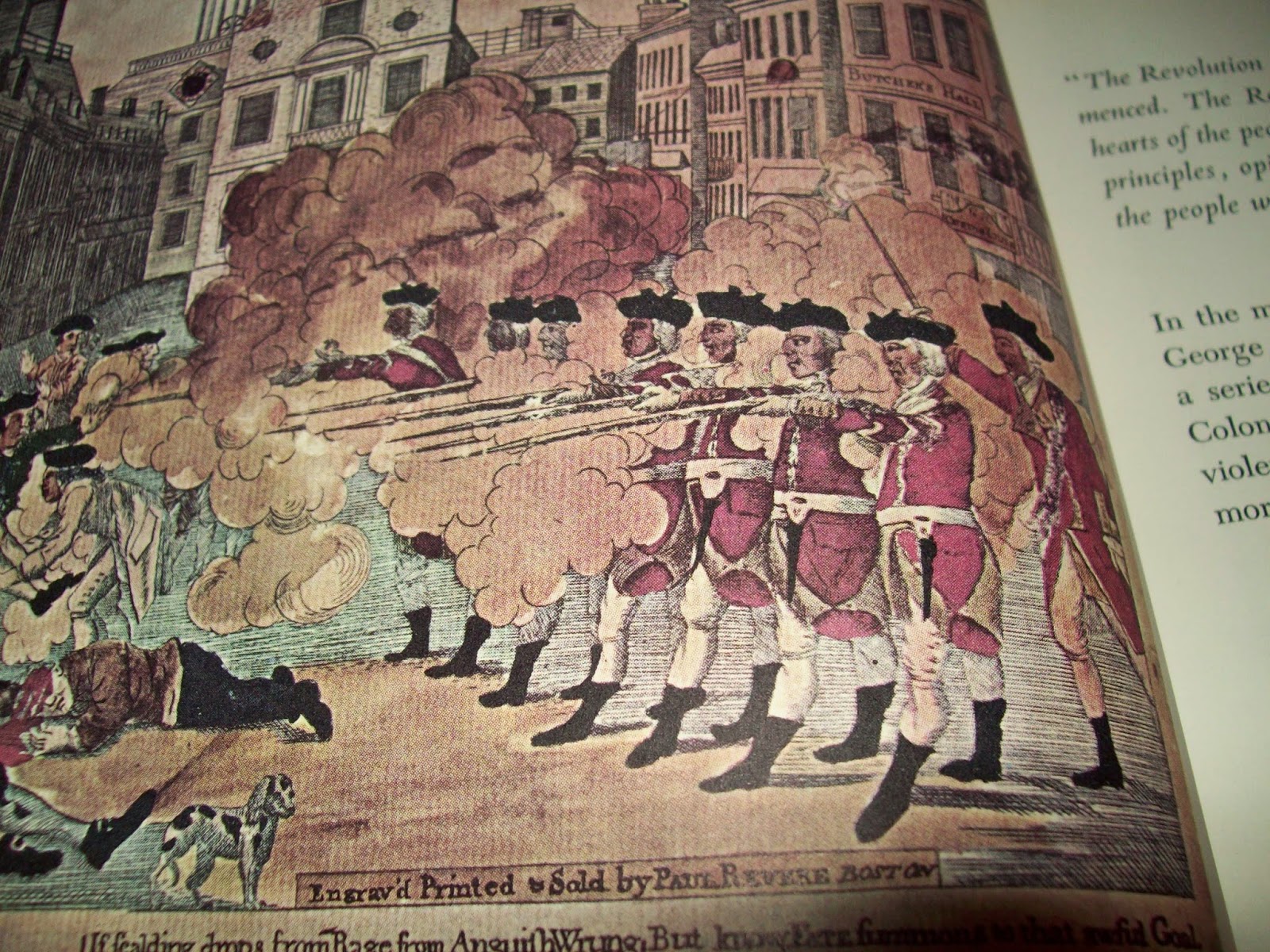