I recently purchased a couple bags of Made in China toy soldiers. I ordered them off the net.
I wasn't sure what I'd be getting scale wise, but I thought "why not?" 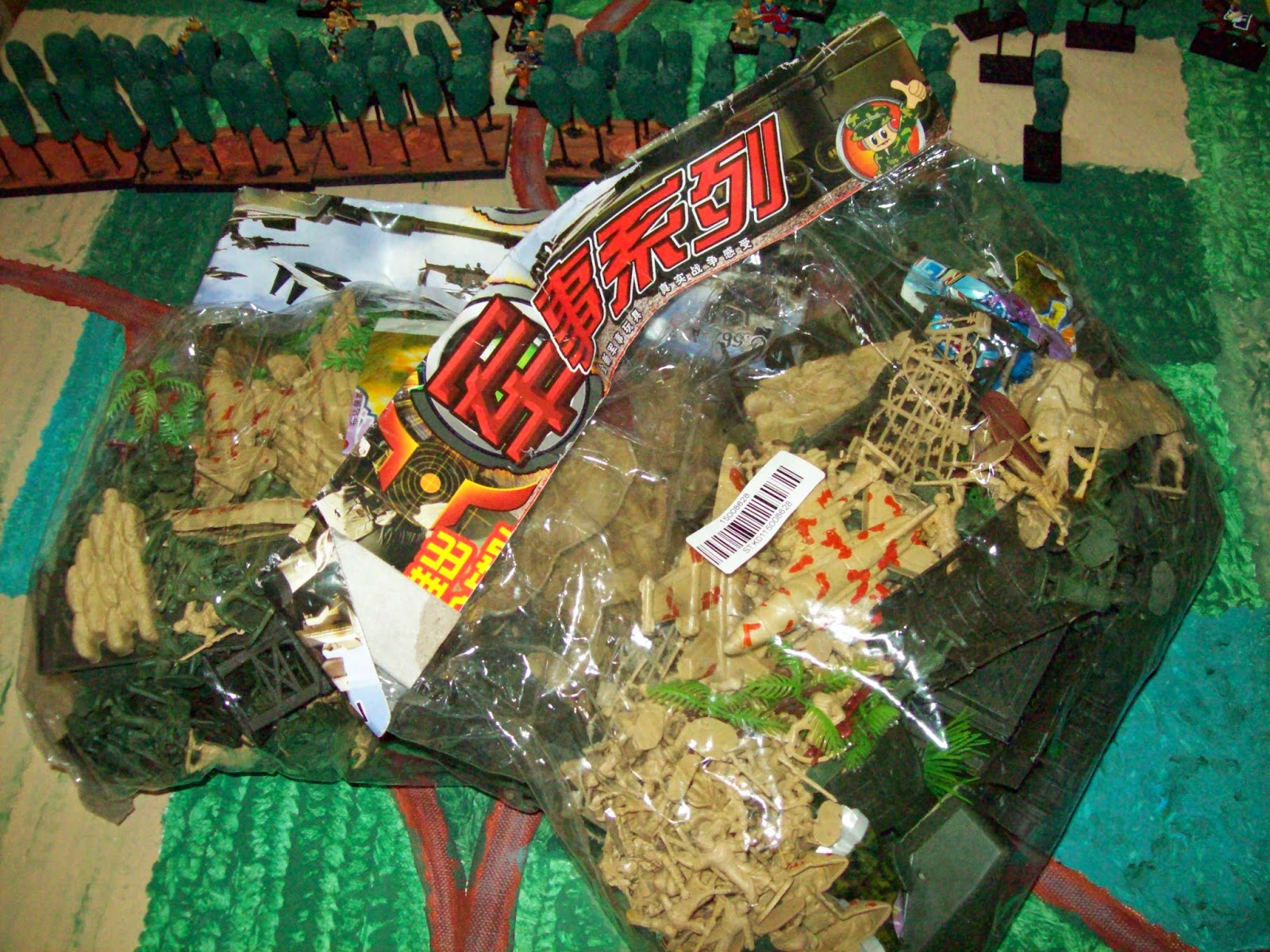 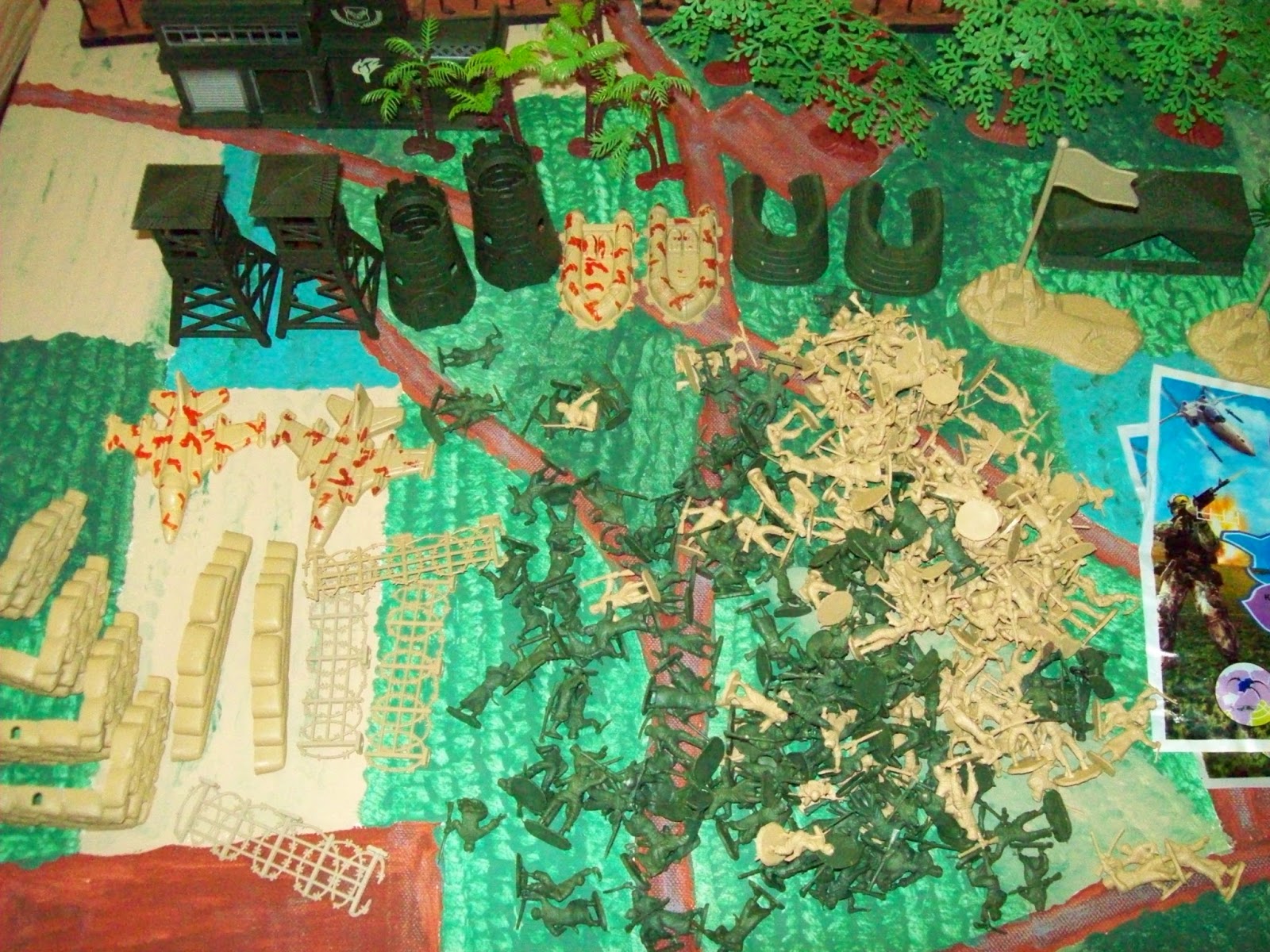 Turns out the figures I expected to be 45 mm - 54 mm tall are recasts of Marx's Arab figures. Here's a link to an article about them:


These figures are cast in a harder plastic than current 1/72 scale releases. They are all between 23 to 28mm tall, most being the latter. There are 11 poses and the original mounted poses are included, albeit with their feet fixed to bases. 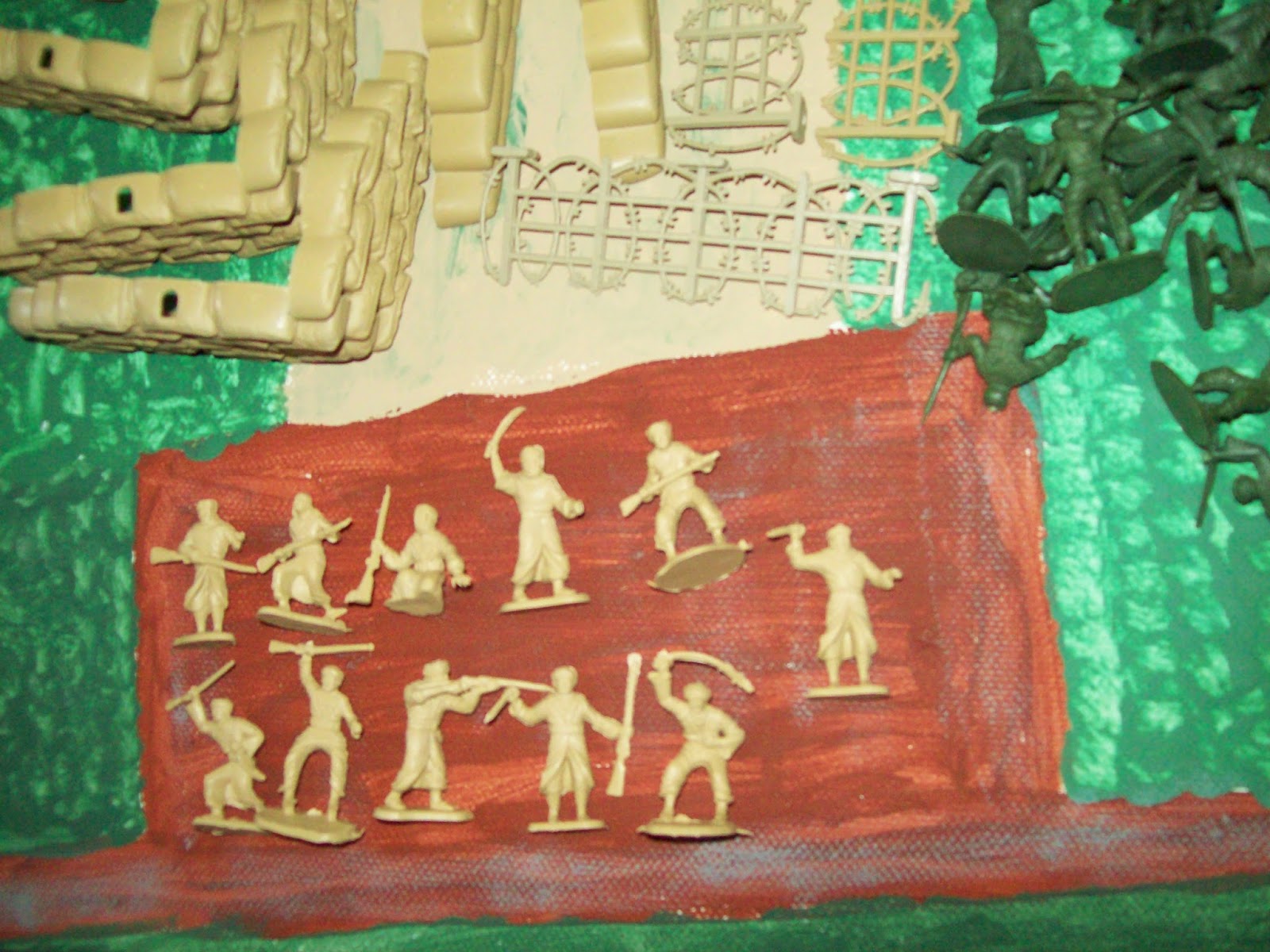 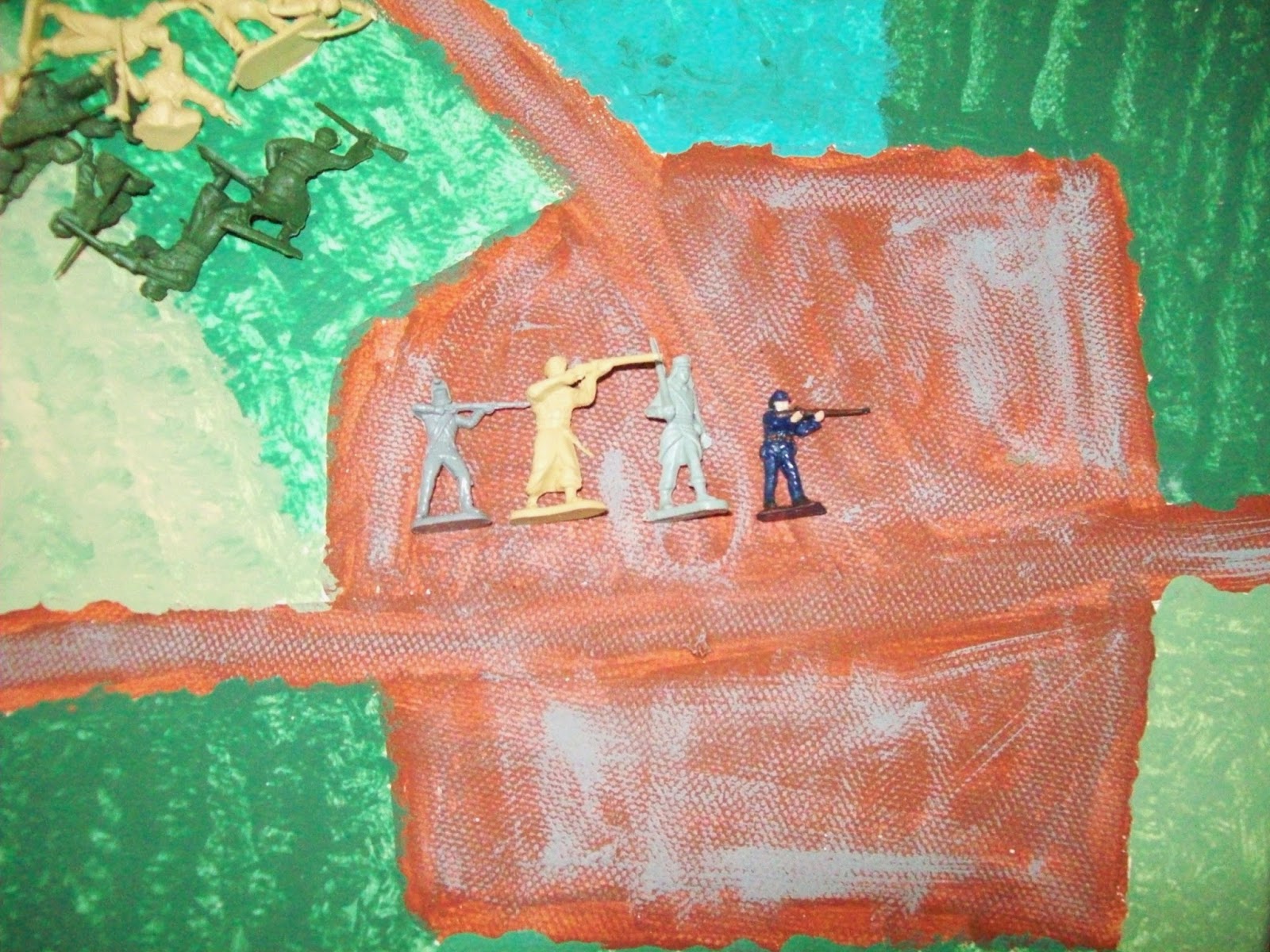 It takes little to clip them free. However finding recast horses might be a problem. I settled on the Thai Giant recasts. The riders require a little trimming between their legs, and the horses' saddles must be carved flat, but they do fit. I also mounted a dozen on some toy camels. These took a bit more trimming of the legs, and I found the plastic can break away under pressure, so careful carving is required. 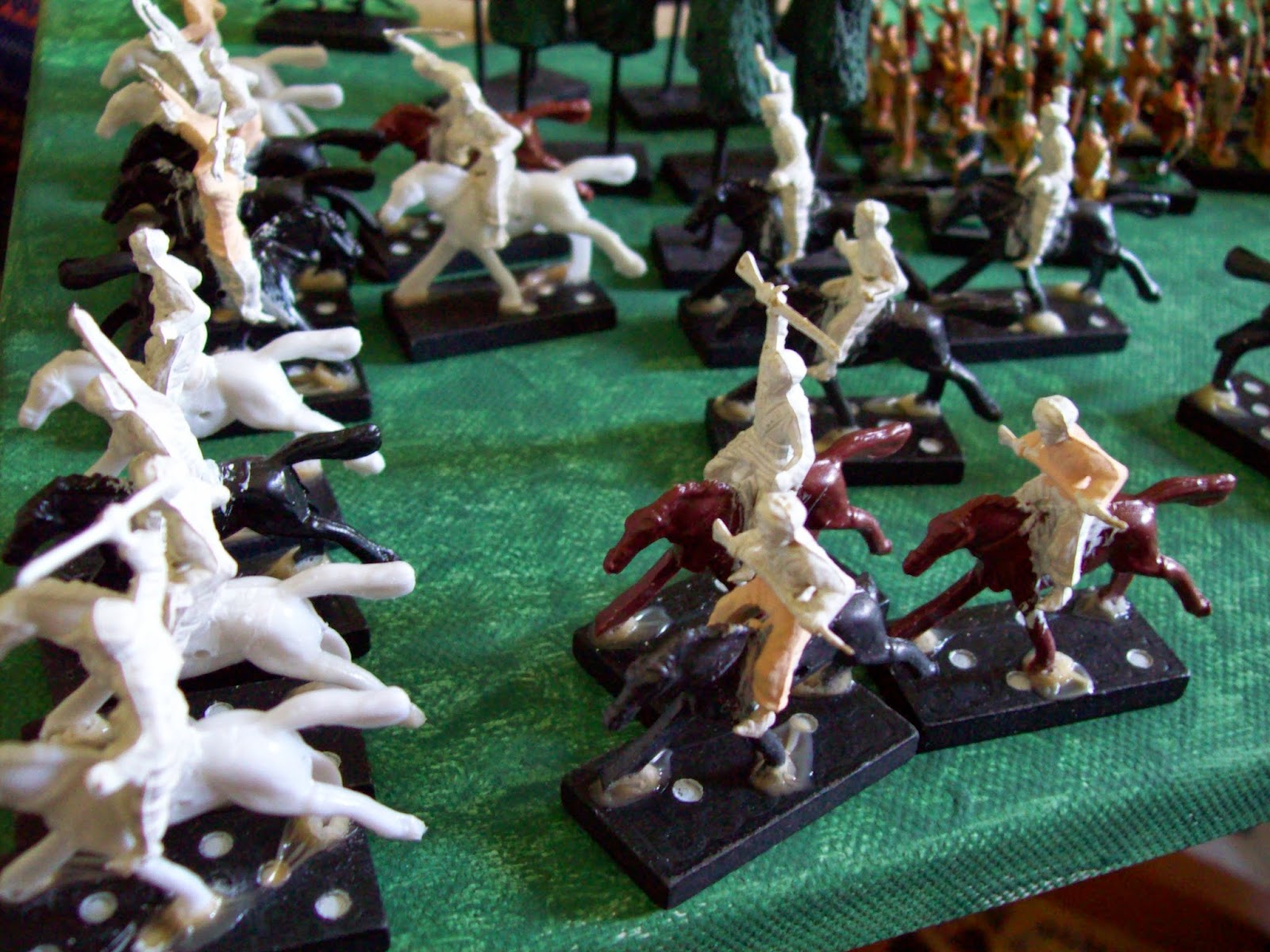 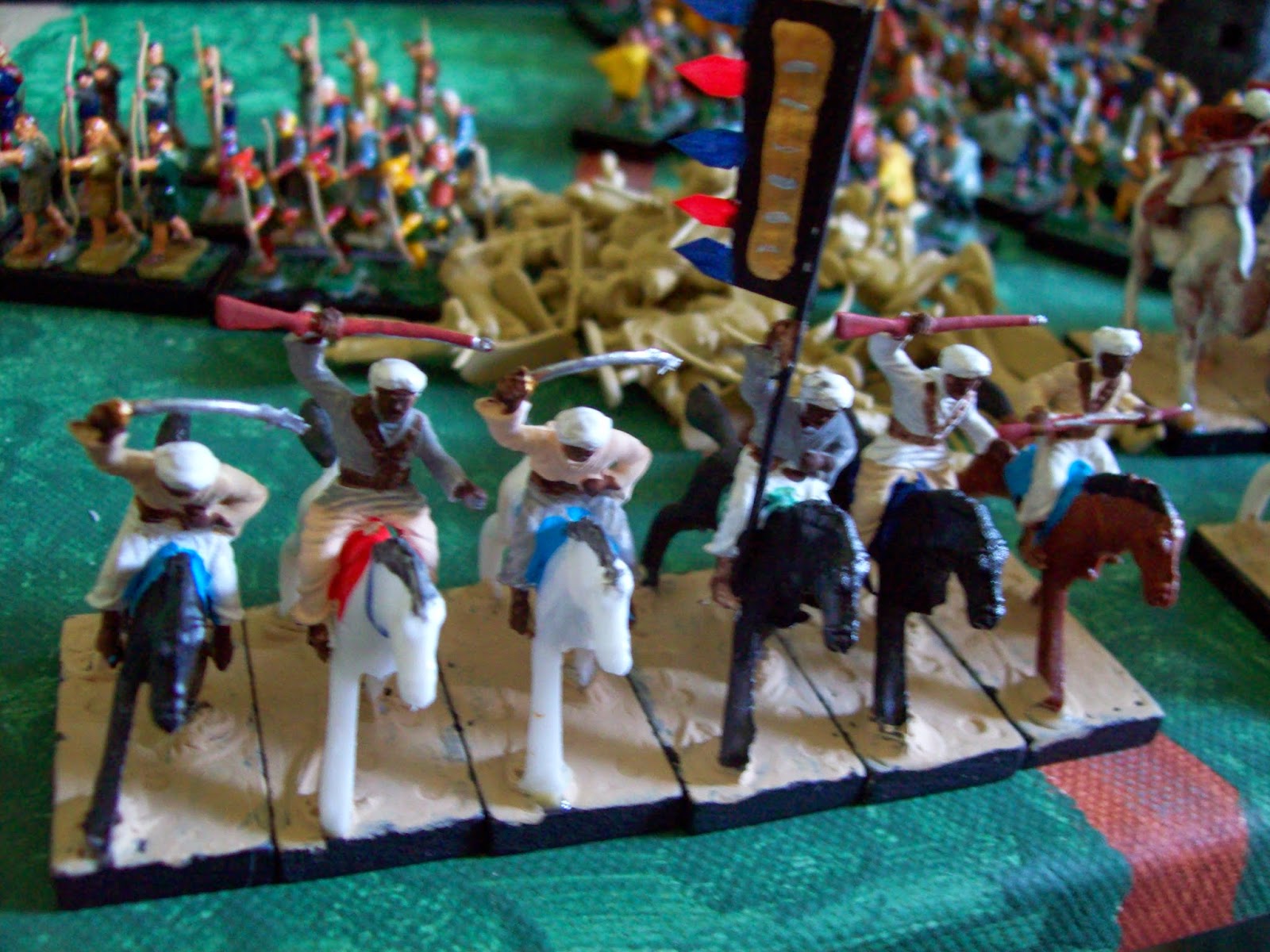 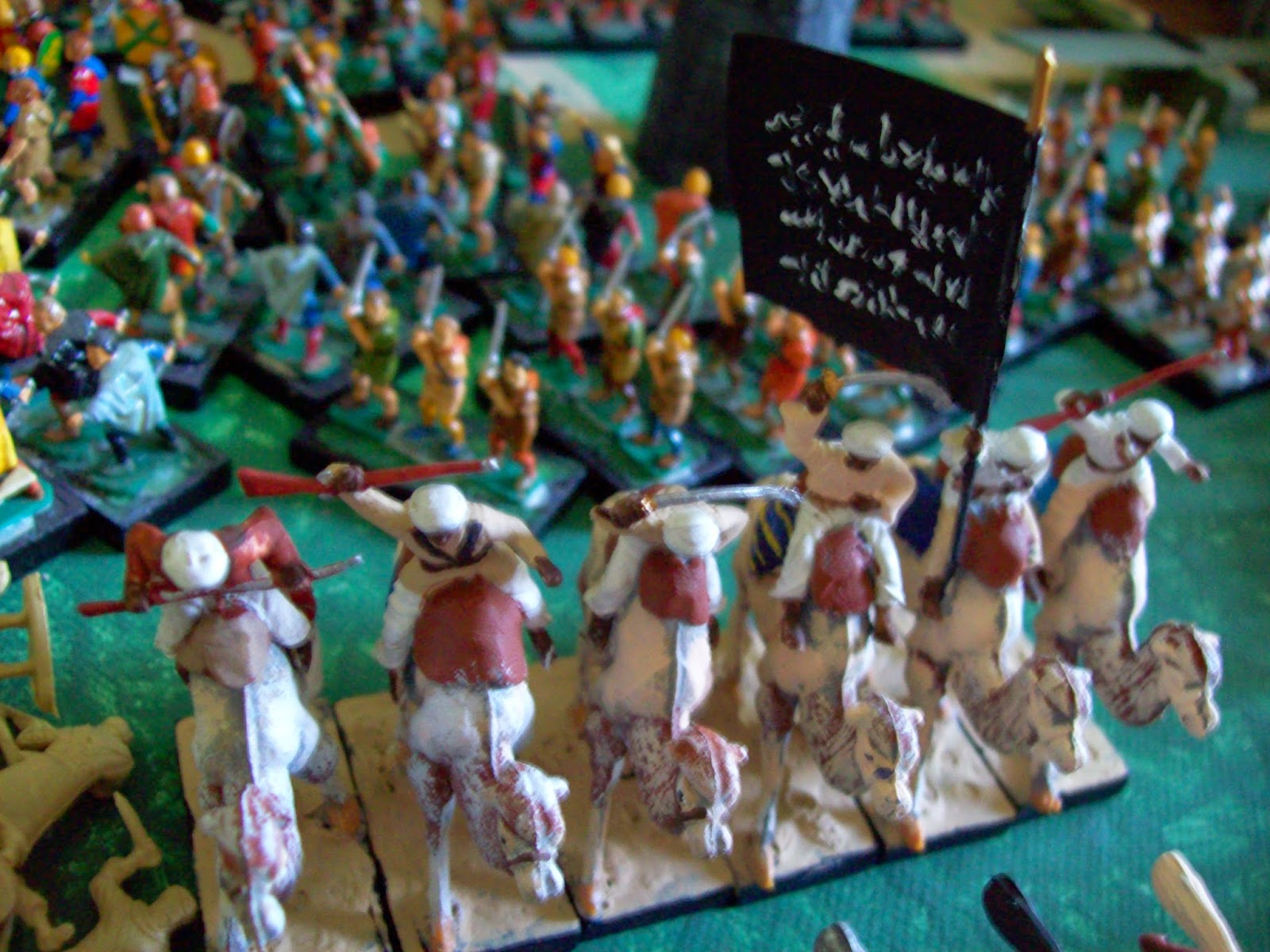 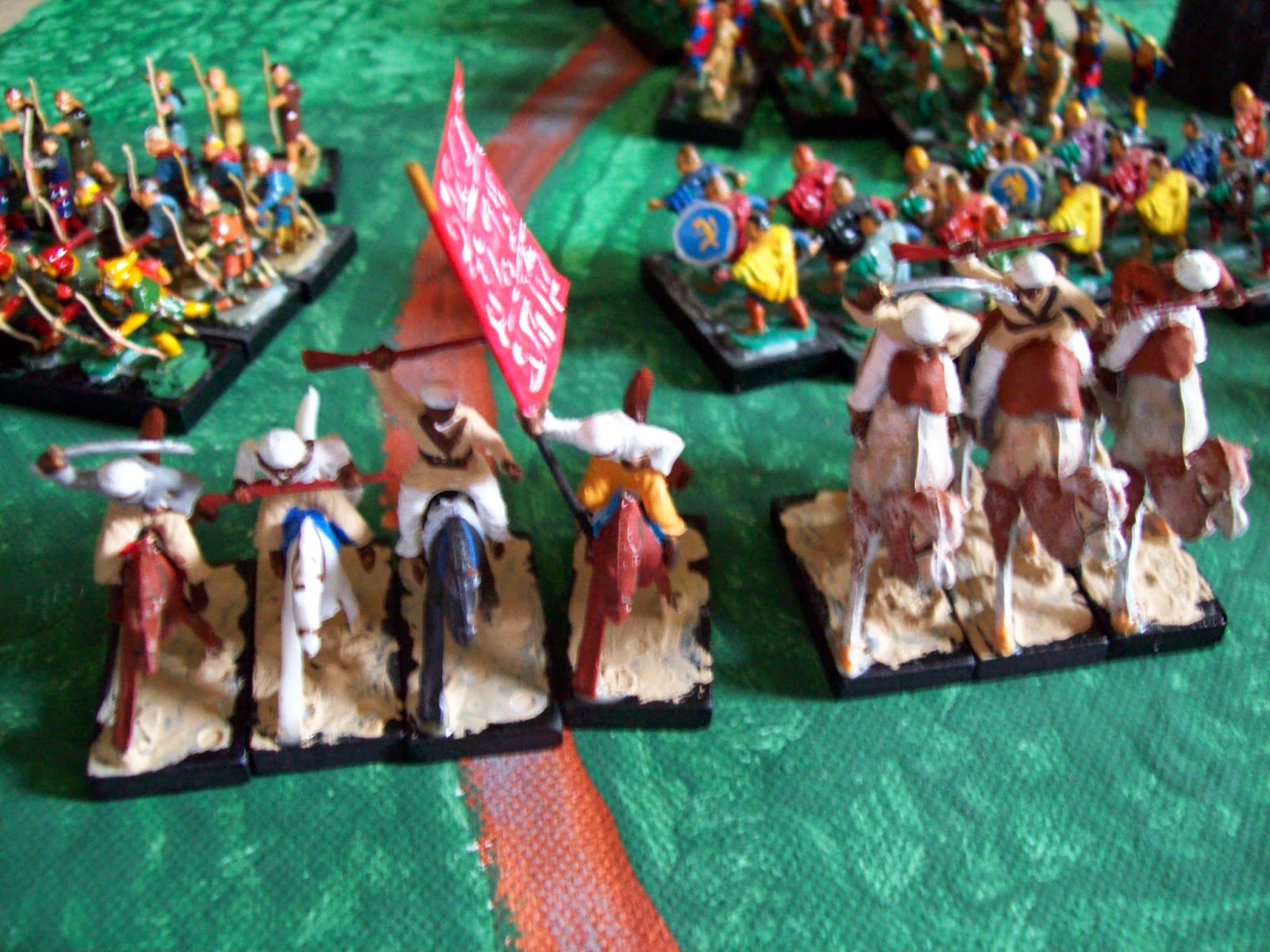 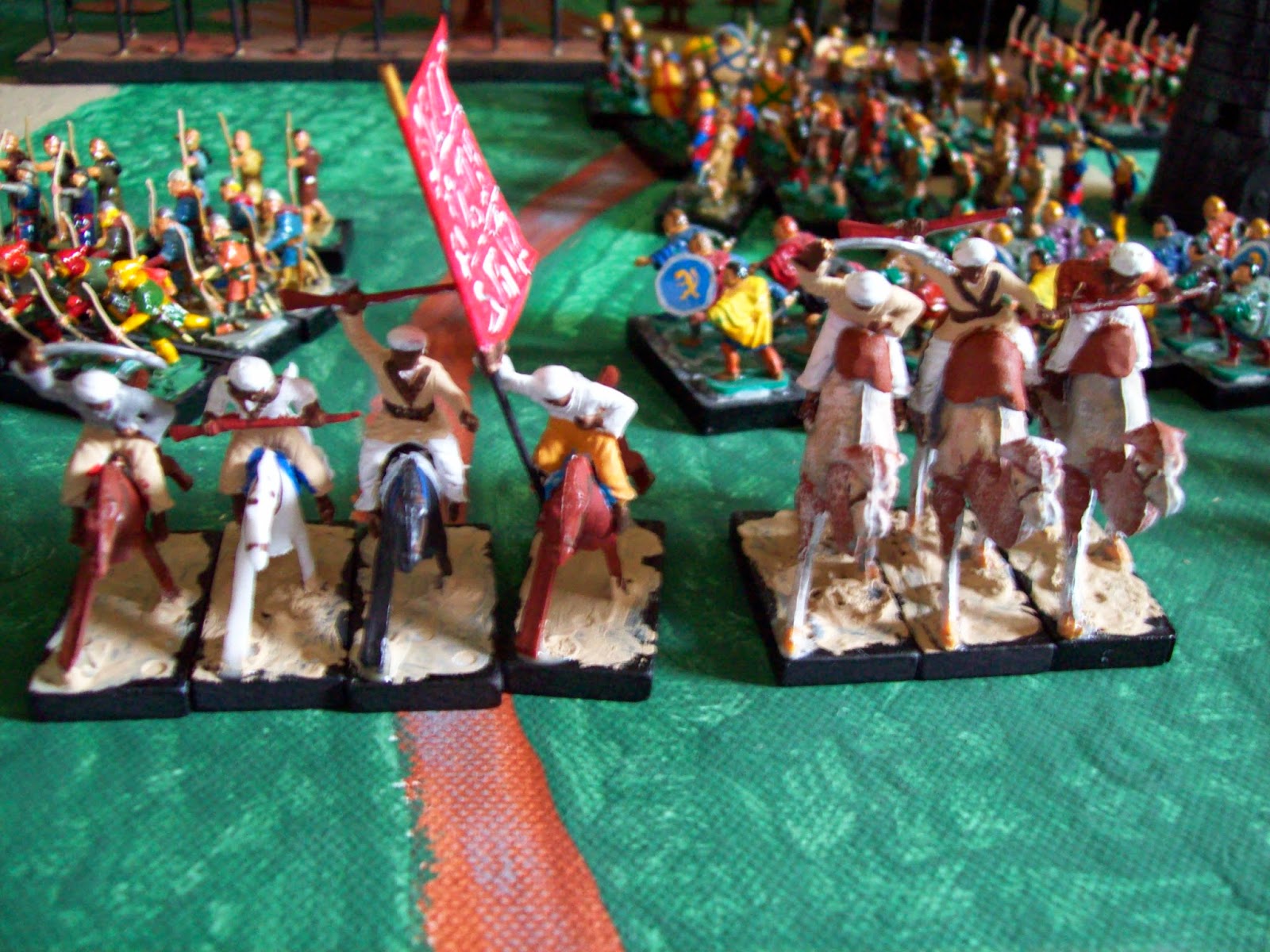 Anyway the bag of toys has over 200 figures. Some casualties from shipping are present, broken guns, snapped off bases, but the vast majority are in acceptable condition. Also included are 4 towers in two styles, 10 trees, deciduous and palm, some of the usual dollar store accessories like fences and sandbags, a large tent, a modern building front and some simple fighter jets and inflatable rafts. Missing was the tank that was to be in the set, and two fictional plastic maps were included. The Muslim soldiers were cast in two colours, tan and olive green.


The potential for these toys is great.


Beyond mounting the riders, of whom there were over 60 in a bag, the weapons were all muskets and swords. With a little paint and imagination they would do as Pathans, Mahdists, Indian, Mamelukes or even Sikh soldiers. 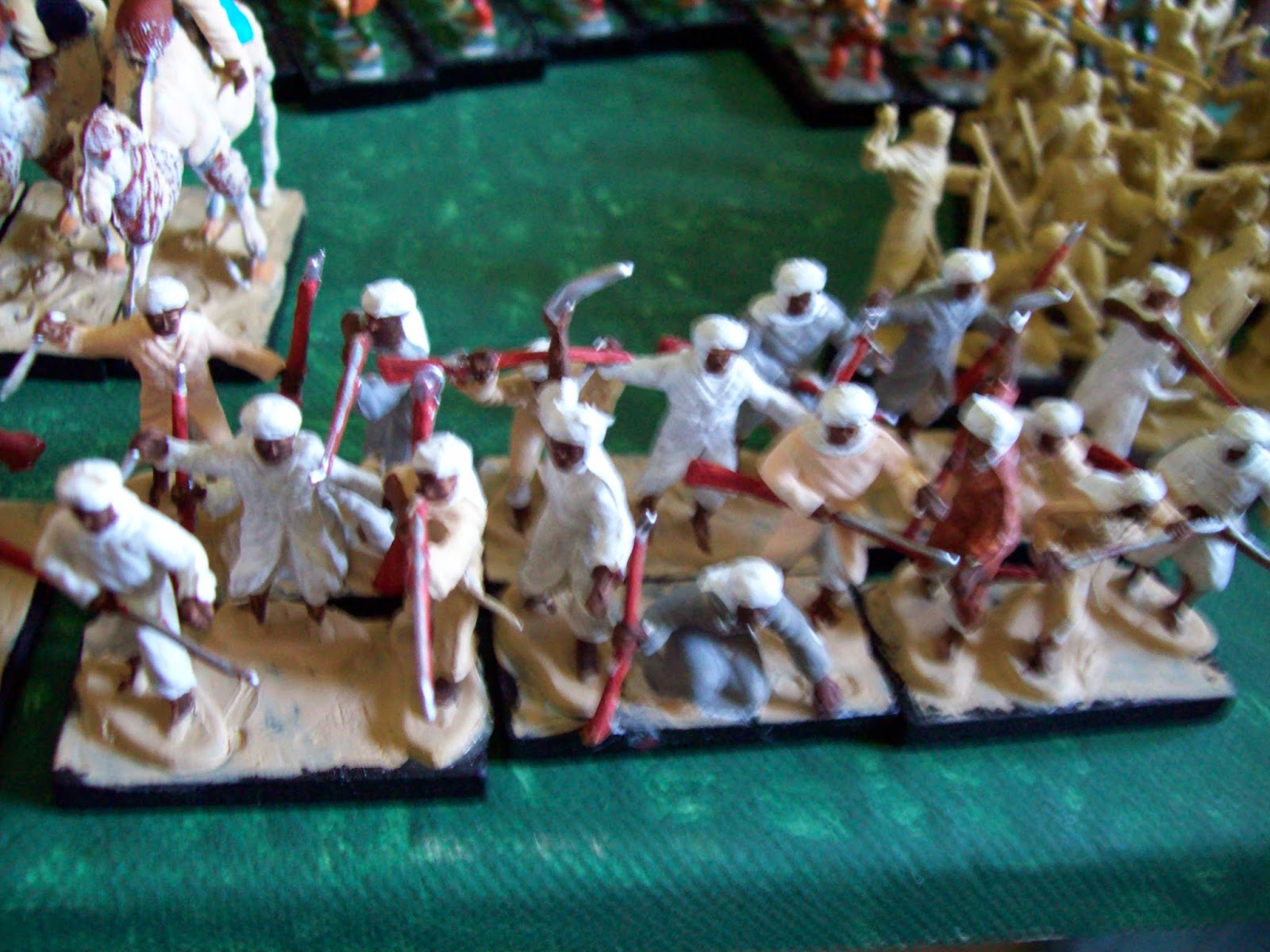 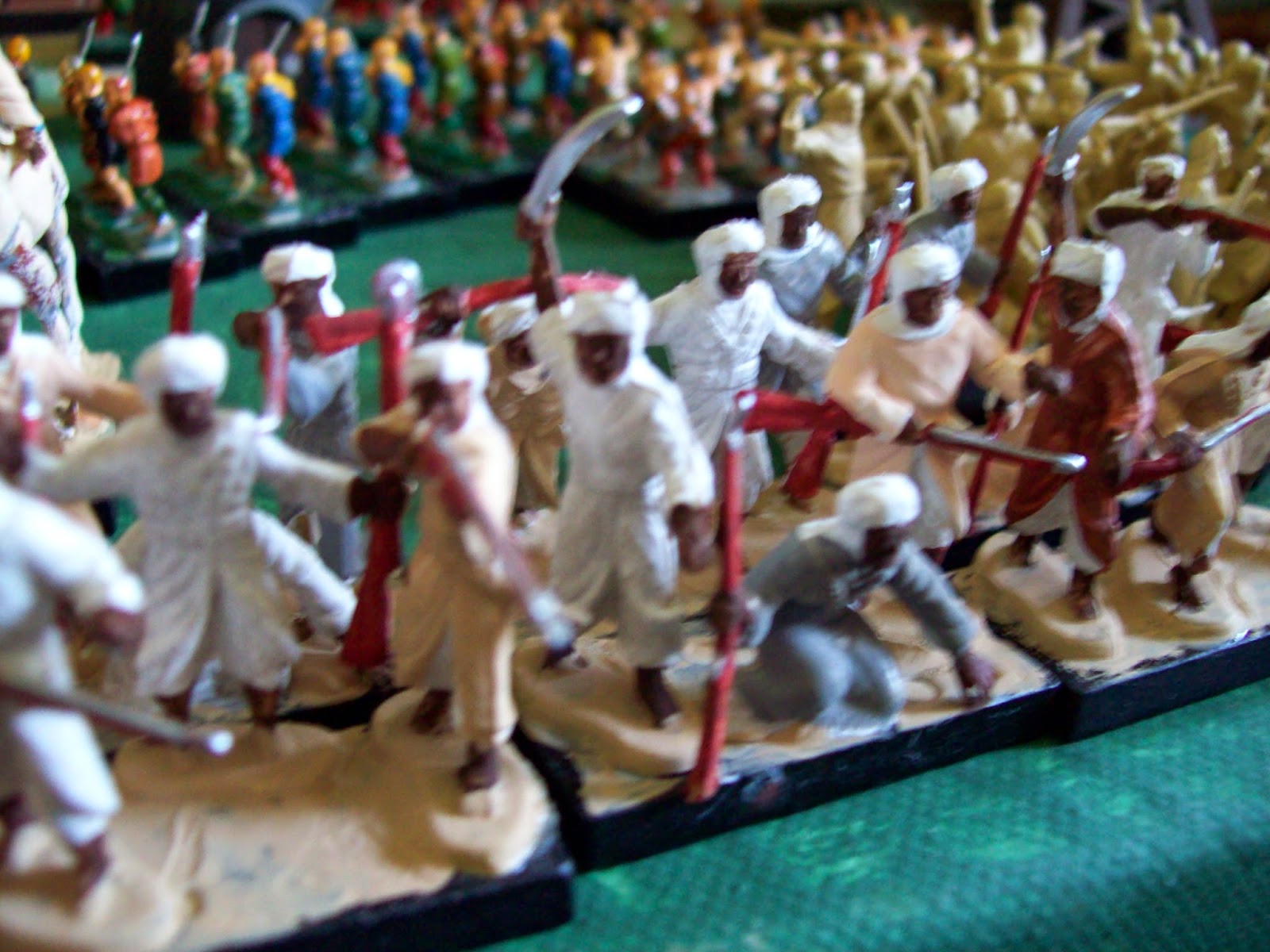 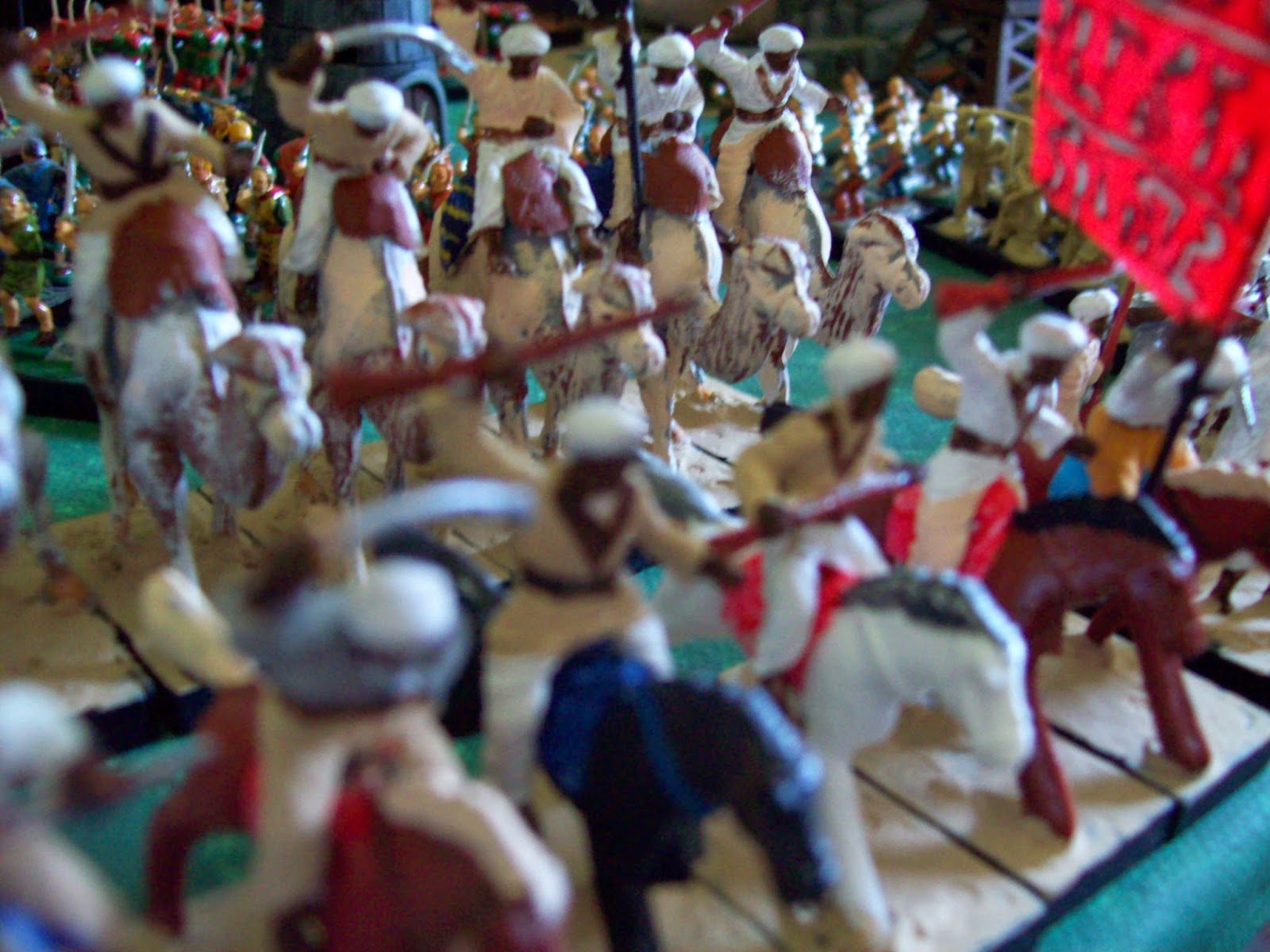 Removing the muskets and replacing them with spears could transport them back in time for armies of the middle east, the crusades, the turks or others.
As an aside, the ad that caught my eye sold me with a photo of all the soldiers set up. But the caption referred to them as "middle eastern aborigines"! I guess the company used one of those computer translators.
I mounted the three rider poses on horses, camels and made some standard bearers. I have no cognisance of what's on the flags, it's a rough copy of those in the first volume of Funcken's Le Costume et les Armes: Des Soldat de Tous les Temps. Vol. I. Des Pharaons a Louis XV. by Liliane and Fred Funcken. (1966)
Now I've seen Marx 28mm recasts of Mexican Alamo soldiers, Civil War soldiers, Captain Gallant Foreign Legion, Noah's Ark, so does that mean other sets might be in the offing? I certainly hope so, but I'm not holding my breath.  Or maybe we'll see the Revolutionary war sets of redcoats and rebels or the Charge of The Light Brigade? Or the World War 2 sets? One can only hope.

on the light side of things, I've been growing raspberries every year. what started as a single bush now produces 6 to 8 liters of berries every summer. I went for a rummage through the basement and I've got enough preserves and jams canned to make a nice batch of wine. So my lousy painting isn't likely to improve with age, but the wine will. 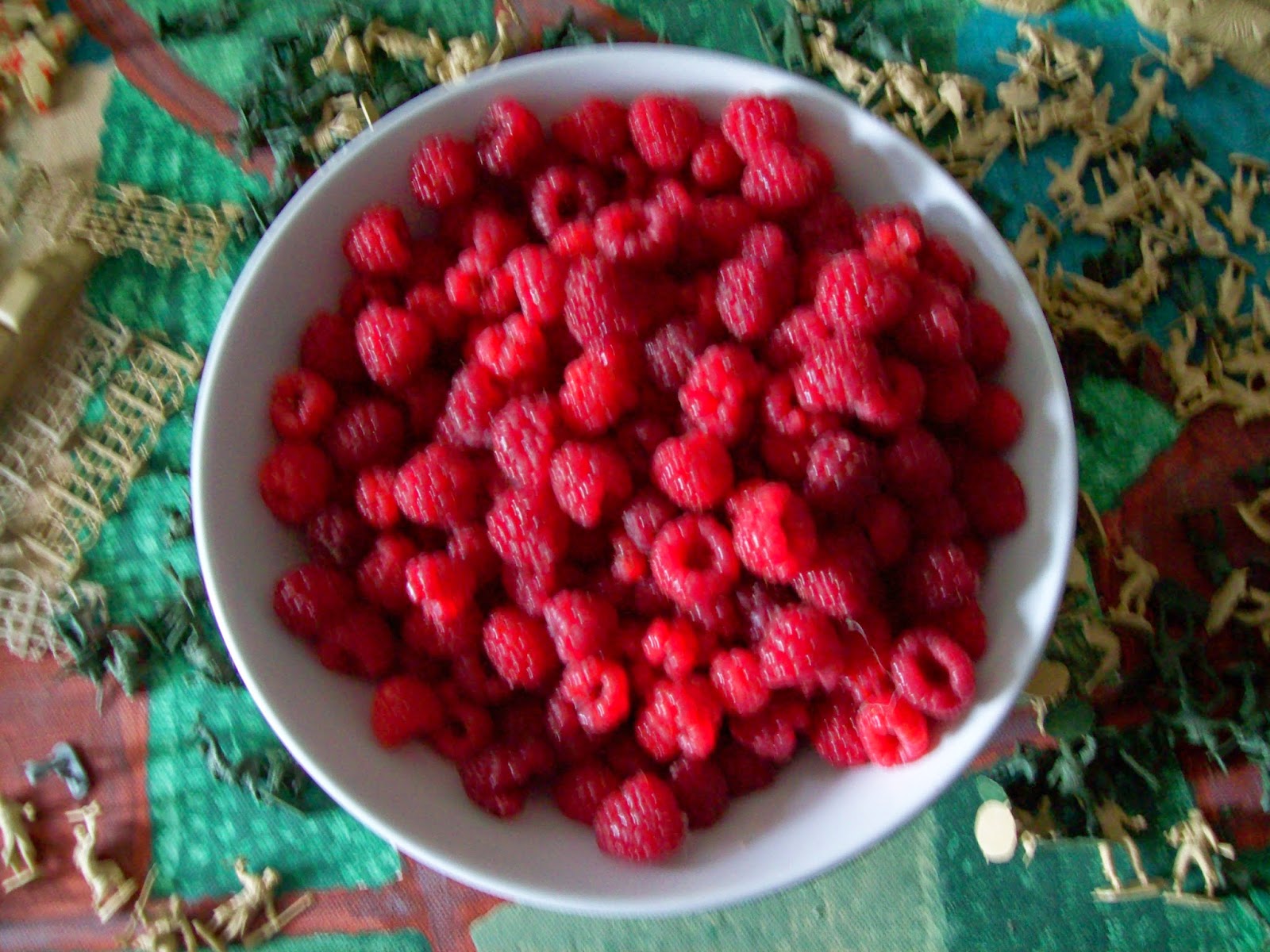