Several years ago I posted some pix of the World War 2 Style tanks and trucks I have found at local dollar stores.

I was looking at Hugh Walter’s excellent blog “Small Scale World” and he had some of the newer made in China tanks. So I thought I’d post some of mine. 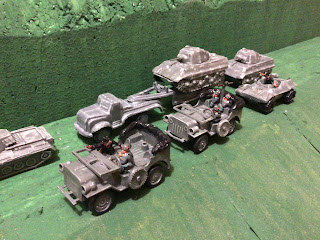 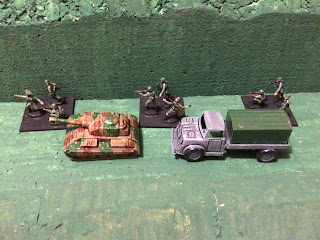 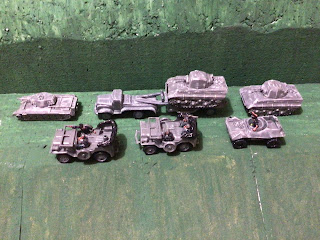 The tanks are a mix of hulls and turrets and they are next to some Atlantic German Panzer Grenadiers. 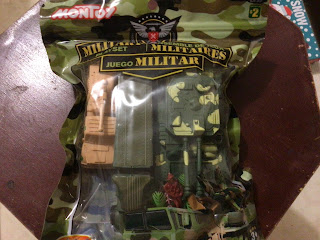 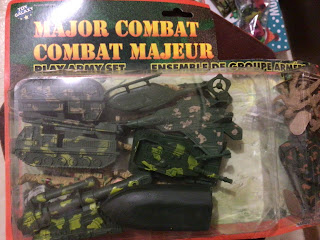 Here’s some of the bags of toys as they come from the store. There are a lot of modern vehicles, based on the US MLRS type of vehicles, but with odd oversized Sidewinder missiles or archaic fantasy howitzers. The Montoy bag has an interesting heavy flatbed truck with a tiny tank on the back that is sporting a huge gun. So I got out the razor saw and did some surgery. 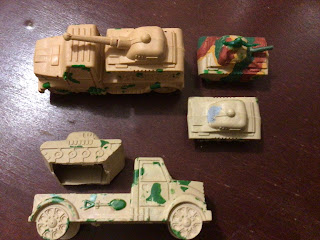 The truck is a nice size and looks pretty good. A box could be easily constructed, but the cast on wheels look odd. They look like WW1 solid metal wheels. The tiny tank would make an OK tankette, perhaps Japanese or Italian. I put half a Hong Kong soldier in the cupola of the colourful one. 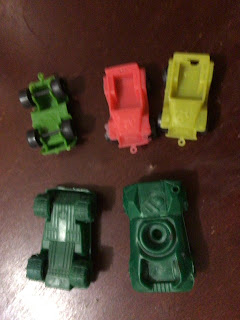 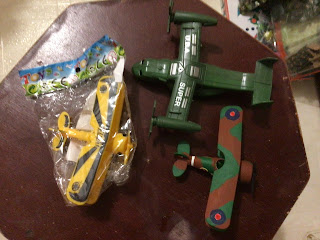 Some more items. Firstly Jeep’s and an odd “dune buggy” with chained tires . I took off the silly howitzer mounted on the buggy and the small shielded Hmg on the fender. I am using these as recon armoured cars, as can be seen in my first pic. I also have mounted a turret on some, an ersatz Sdkfz 222.

The airplanes are kind of neat. The Osprey is a nice model as toys go. But the biplane has those friction motors on the bottom ruining the aircraft’s profile. Also the pilot is a cartoonish helmet and goggles that I cut out with an Xacto. I painted the plane as an early war aircraft. Not very satisfying but beggars can’t be choosers. 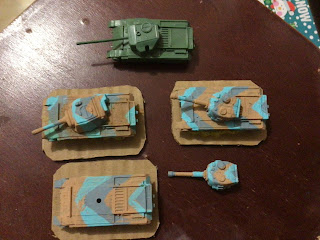 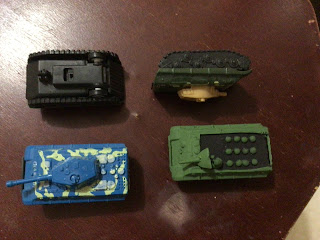 More tanks with swapped turrets. The top has several versions based on the Centurion tank.

The next lot are a new product, small panther hulls, with that annoying friction motor (easily removed) and a selection of inappropriate turrets. So I tried to turn one into a Lvt Buffalo, using the shielded Hmg from the the dune buggy. I also cut out the rear deck and added a lower one with half beads as the helmets of the sheltering marines. 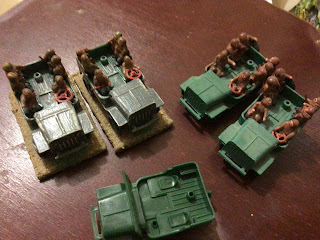 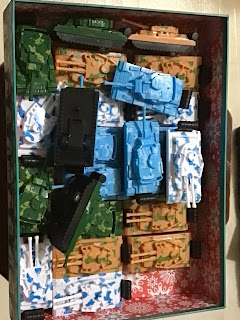 The last batch of photos have some of my plasticene blobby guys I tried to use as loads in those naked Jeep’s. Not too successful. They look like seals.

And finally some of the newer tanks.

Colourful, and of two types. They also have an annoying fuel barrel on the rear end, easily cut off, but an odd inclusion.

There are more items coming out all the time, but these are some that I’ve been working on for now.