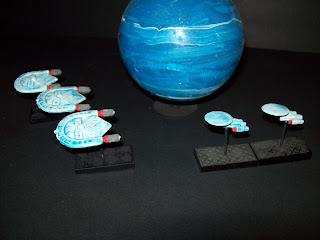 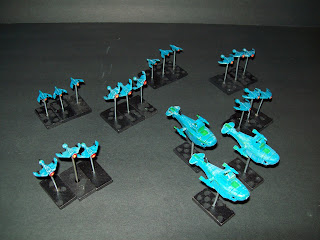 Internal Systems:
When a ship receives internal damage, the player rolls one d6 per point of damage to assess the effect.
There are 6 systems:
1-Hull
2-Crew
3-Sensors
4-Weapons
5-Cargo*
6-Engines
Each internal system has a maximum of 6 points.(as with Shields, large ships or bases can have several layers of 6 points.)
If the hull points are all lost, the ship is destroyed.
If the crew is destroyed, the ship is a derelict and can be tractored and towed away or boarded and taken by a new crew.
Sensors reflect the "to hit" ability of the ship. The ship must roll equal to or less than the sensor number to fire the weapons. Once destroyed the ship can't fight.
Weapons is straightforward. Once destroyed the ship can't fight.
Cargo can be anything. Extra crew, supplies, spare shuttles, etc. Basically a free hit in most games.
Engines reflect the speed the ship can move. A ship with 4 boxes can move 4 spaces. Once destroyed, the ship explodes. Count up all the unused boxes from all systems and apply that number as damage to any ship within 2 hexes. Half that number within 3 hexes.
Any hit on a previously destroyed system is applied to #1 Hull.

That's pretty much it.

I do have a more "complex" set of damage rules, where the hit on #6-Engines- causes a second roll on internal systems. I created that for space carriers and to differentiate between missile weapons and beam weapons.
These secondary systems are:
1-Torpedo (this makes the first weapons (#4) Beam Weapons hits.)
2-Shields Down! Any remaining shielding is destroyed for this scenario.
3-Life Support Out! - ship crew is dead
4-Shuttles/Fighters A box is destroyed meaning the ship can't land those fighters or if not yet launched, those fighters are destroyed.
5-Fire! Roll 2-d6 damage and apply to the following in this order: Shuttles, Cargo, Hull, Crew
6-Warp Core Breach! Ship explodes with resulting damage to nearby ships. 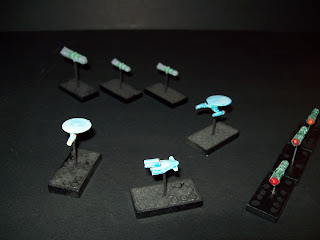 Some Conventions:
I don't allow multiple ships to add up their attacks to overpower an opponent. Each ship makes its own attack and is resolved.
Fighters are treated as a squadron, up to a strength of 6 per model. Hits generally are applied as a kill, so fighters are pretty vulnerable to ships.
However, they can have a real punch with torpedos. I allow fighters to launch torpedoes or strafe ships with beam weapons.
I break the fighters/shuttles into three categories.
First, fast combat fighters
Second, slower torpedo fighters
Thirdly, Shuttles 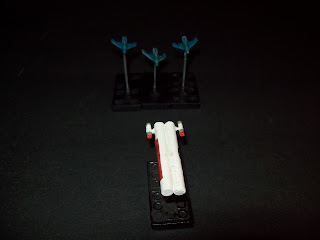 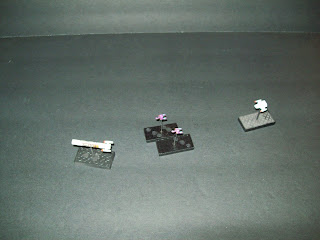 If a ship or fighter wants to leave the game because of scenario objectives or if it has too much damage, it can warp out. As long as the ship has a functioning engine box, it can double its movement until it leaves the board. Simple. While it is warping out, it cannot fire its weapons, but its shields and armour are still working if available.

I hope this made some sense.
Tinker with the rules all you want, they're basically the Bang Yer Dead! variety, but I've had some fun with them.
Posted by Doug at 11:36 AM