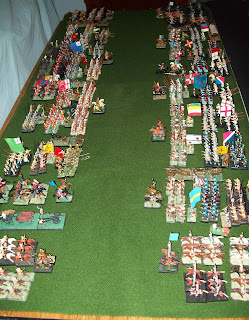 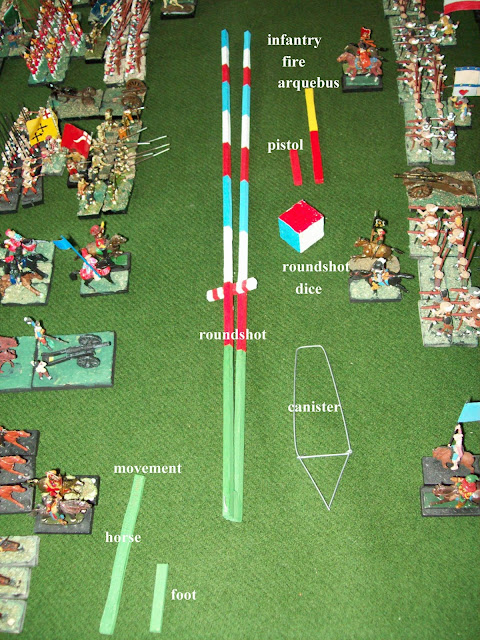 These are the measuring devices used. They are copies of those used by the Tyne Tees television show 'Battleground!" hosted by Edward Woodward. Thankfully the Edgehill show is now free for all to see on Youtube. Peter Guilder figures and terrain and Callan himself hosting. The three colour dice is a block of balsa. Basically the roundshot sticks works as follows:
You place the base (the hinged end of the stick) in front of the firing gun and the other end over the target(s) you wish to hit. roll an ordinary 6 sided die. 5 or 6 means no adjustment. 1 through 4 means the device is moved right or left to match the rolled number. Then roll the three colour die. The colour shows which areas are capable of inflicting hits. Any figures covered are casualties. I mark the casualties with a dice that is placed next to the suffering unit. Once three hits are received, I remove a base and the marking dice. 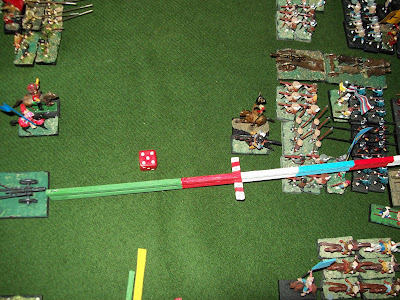 Setting the Roundshot stick. The dice roll is good! A five, so no adjustment is needed. 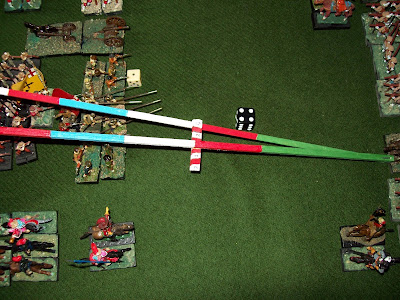 In this example, the Roundshot stick is set and the dice roll is 4. The adjustment is made. The coloured die is rolled. If Blue is rolled in this instance, two figures would be casualties. As the unit already has 1 unit as a casualty (see the dice attached to the unit), one base would be removed and the white dice would be removed as well. 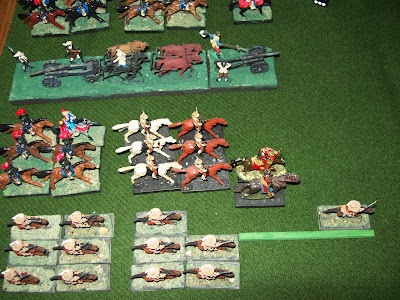 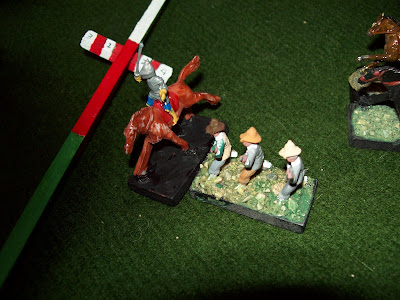 The casualties have started to add up. 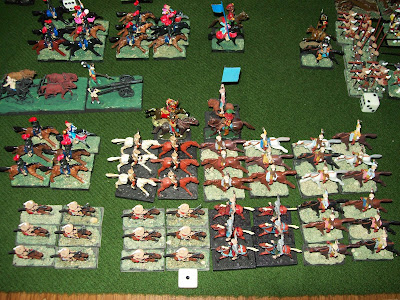 The cavalry melee on the English right flank. The cavalry each roll one dice per base. 6's are hits.
MELEE
All units must be in two ranks. Cavalry attack with three figures in the first rank. They roll three dice in a melee. Any casualties are replaced form the rear rank.
Infantry fight in units three wide and two deep. They give fire with two dice (one base is pikemen with no weapons), but they melee with three dice.
In a game of this size, refinements such as heavy cavalry advantages, terrain etc are largely ignored by a soloist like me. Three hits remove a base. The English (at left) have suffered one casualty. Leaders have little role other than colour and that they can add one to a unit's morale test.
MORALE
All units have a morale of 6 if they have 6 bases.
Once they aquire 3 hits and lose a base, their morale drops to 5 as they have only 5 bases.
They test morale by the roll of the dice. 5 and under they are OK. A 6 would be a failure of morale and the unit would turn tail and run. HOWEVER, a leader base can add ONE to a morale roll. In this case, raising the morale level from 5 to 6. Once a unit breaks and flees, it is gone for good. 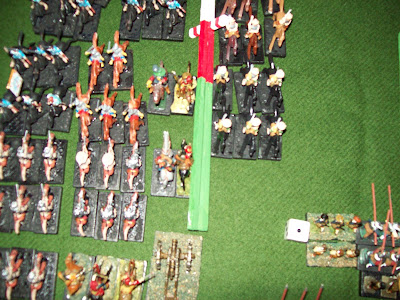 A connundrum. Cannons can be blocked by their own troops. Any soldiers in the green zone are casualties, as are any in the appropriate coloured sections. In this case, the cannon can fire at the approaching cavalry on the right, but care must be taken so that a variation does not cause any friendly casualties. 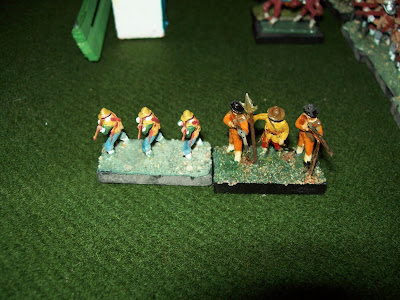 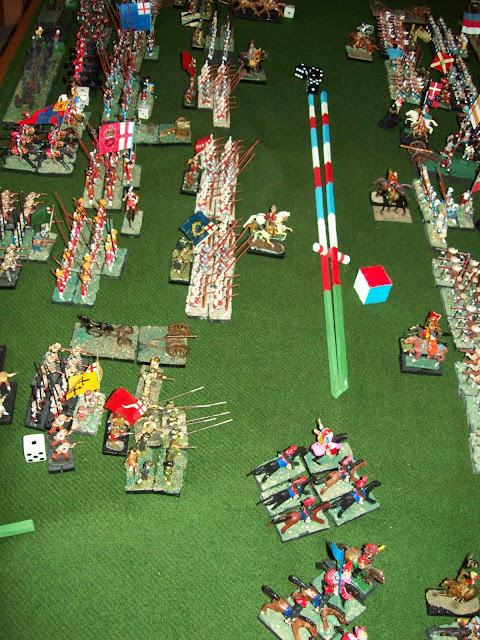 The English foot begin their advance. 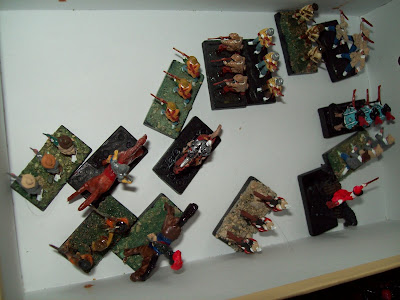 The casualties are adding up.

Odds and sods:
When a cavalry unit attacks an infantry unit, they attack the entire unit, even if they are only lined up against part of the infantry unit. A simplification borne out of DBA. Each base rolls 1 dice.
Giving Fire:
Infantry have two zones of fire, near and far. Far means that only a 6 is a hit. Near, 5 and 6 hit. Pistols only hit on a 6. 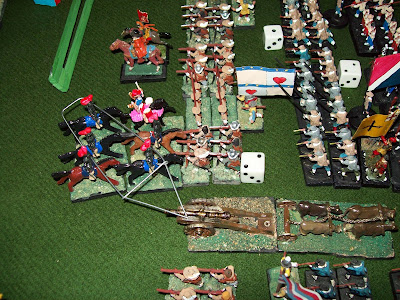 I think this is the meat and potatoes of my simple rules.
With smaller games and fewer figures greater variations can be introduced for heavy cavalry, experience etc., but a fun game can be had with "bang you're dead" rules as well.